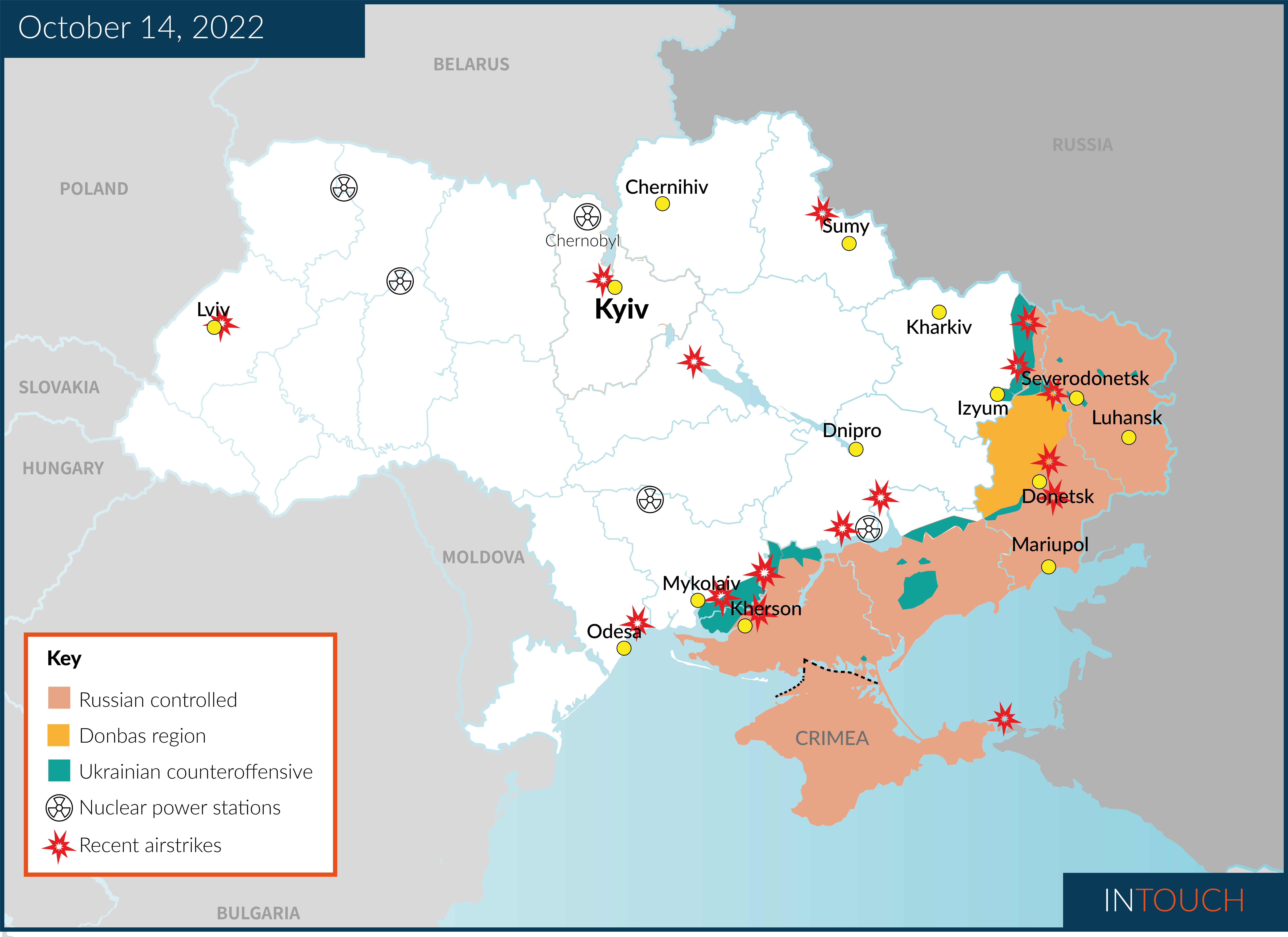 Major shelling has hit many cities in Ukraine over the last week, including fresh strikes in the capital, Kyiv, which killed at least eight people. The strikes were the first to target the capital city in several months. Other cities which have seen an increase in shelling recently include Mykolaiv, Zhytomyr, Dnipro, Zaporizhzhia, Khmelnytskyi, Kharkiv, Kherson, Nikopol, and Ternopil. The wave of attacks has reportedly come as retaliation for an attack on the key Russian-built Crimean Bridge, which connects the annexed Crimean Peninsula to Russia and was partially destroyed in a blast over the weekend. Ukraine has long criticised the bridge, calling the structure ‘illegal’. While Russian aerial attacks have intensified, Ukrainian forces on the ground have continued to make territorial gains, with several settlements in Kherson recaptured in recent days.

Saturday’s explosion on the Crimean Bridge was a powerful and symbolic blow to Moscow, with Russian President Vladimir Putin claiming the blast was an “act of terrorism” and accusing Kyiv of responsibility. While Ukraine has neither confirmed, nor denied, its suspected involvement with the blast, a spokesman for the Main Intelligence Directorate of the Ukrainian Ministry of Defence stated Kyiv would not comment on the latest allegations from Russia and dismissed Russian investigative activities into the blast as “nonsense”. Moscow claims Kyiv elaborately arranged for disguised explosives to be transported on a roundabout route from Odesa in southern Ukraine to Bulgaria by sea, then to Georgia, where it’s alleged, they were then driven via Armenia into Russia.

The wave of missile strikes which was then conducted across the country on Monday came in response to the Crimea Bridge explosion. On Monday alone, it’s estimated that a total of 19 people were killed in strikes nationwide. Further strikes have also been conducted in the days following, with the Kremlin reiterating on Wednesday that the objective of its ‘special military operation’ in Ukraine remained the same but adding that Moscow’s goals had become “more relevant against the backdrop of the actions of the Ukrainian regime”. The statement appears to suggest Moscow believes the Crimean Bridge explosion has lent legitimisation for Putin’s main goal to ‘demilitarise and denazify’ a ‘fascist’ Ukraine. At least eight people have reportedly been arrested in connection with the explosion on the bridge, including five Russian nationals.

Other major developments amid fighting include a Russian attack on a market in the eastern town of Avdiivka which killed at least seven people, while multiple deaths were reported following a strike on a five-storey residential building in Mykolaiv. At least three fatalities have been confirmed, including an 11-year-old boy who was pulled alive from the rubble but later died. The strike in Mykolaiv came amid a series of Russian missile and drone attacks on Thursday, including attacks targeting energy and military infrastructure facilities near the capital, Kyiv, and in the western Lviv region. Meanwhile, in southern Ukraine, the Russian-installed head of the mostly occupied Kherson region has urged civilians to evacuate and relocate to Russia, claiming daily Ukrainian missile strikes were endangering civilian lives. The development comes as Ukrainian troops have gained ground amid their counteroffensive in the region; however, Kyiv has rejected the insinuation that Ukrainian forces have targeted civilians. Elsewhere, across the Russian border, a residential building in the border town of Belgorod has apparently been hit in what Russian officials claim was a Ukrainian attack.

Following further strikes on Ukrainian cities, Ukrainian President Volodymyr Zelenskyy held emergency talks with the G7 group of nations on Tuesday and urged leaders to hit Russia with further sanctions in response to what he described as a “new wave of terror”. G7 leaders are understood to have promised to continue providing “financial, humanitarian, military, diplomatic, and legal” aid to Ukraine for “as long as it takes”. NATO has also released another statement, reaffirming the military alliance’s commitment to standing with Ukraine. NATO Secretary General Jens Stoltenberg indicated ramped up air defence provisions for Ukraine were on the cards, along with plans to help Ukraine counter Russian drone, cruise missile, and ballistic missile strikes using long and short-range systems. The UN General Assembly has also condemned Russia’s attempts to annex four regions of Ukraine, with the resolution supported by 143 countries, while 35 states – including China and India – abstained from the vote, and five countries rejected the vote: Russia, Belarus, North Korea, Syria, and Nicaragua.

Meanwhile, the head of the International Atomic Energy Agency (IAEA) has expressed further concern over the status of the Zaporizhzhia Nuclear Power Plant near Enerhodar after the site lost external power for the second time in five days earlier this week. The repeated loss of power at the plant has triggered fears the plant has an urgent need for more adequate nuclear safety and security protection measures around it. As Western allies have continued to harden their stance against Russia, Stoltenberg issued a warning to Moscow, threatening “severe consequences” should the Kremlin make moves to use nuclear weapons.