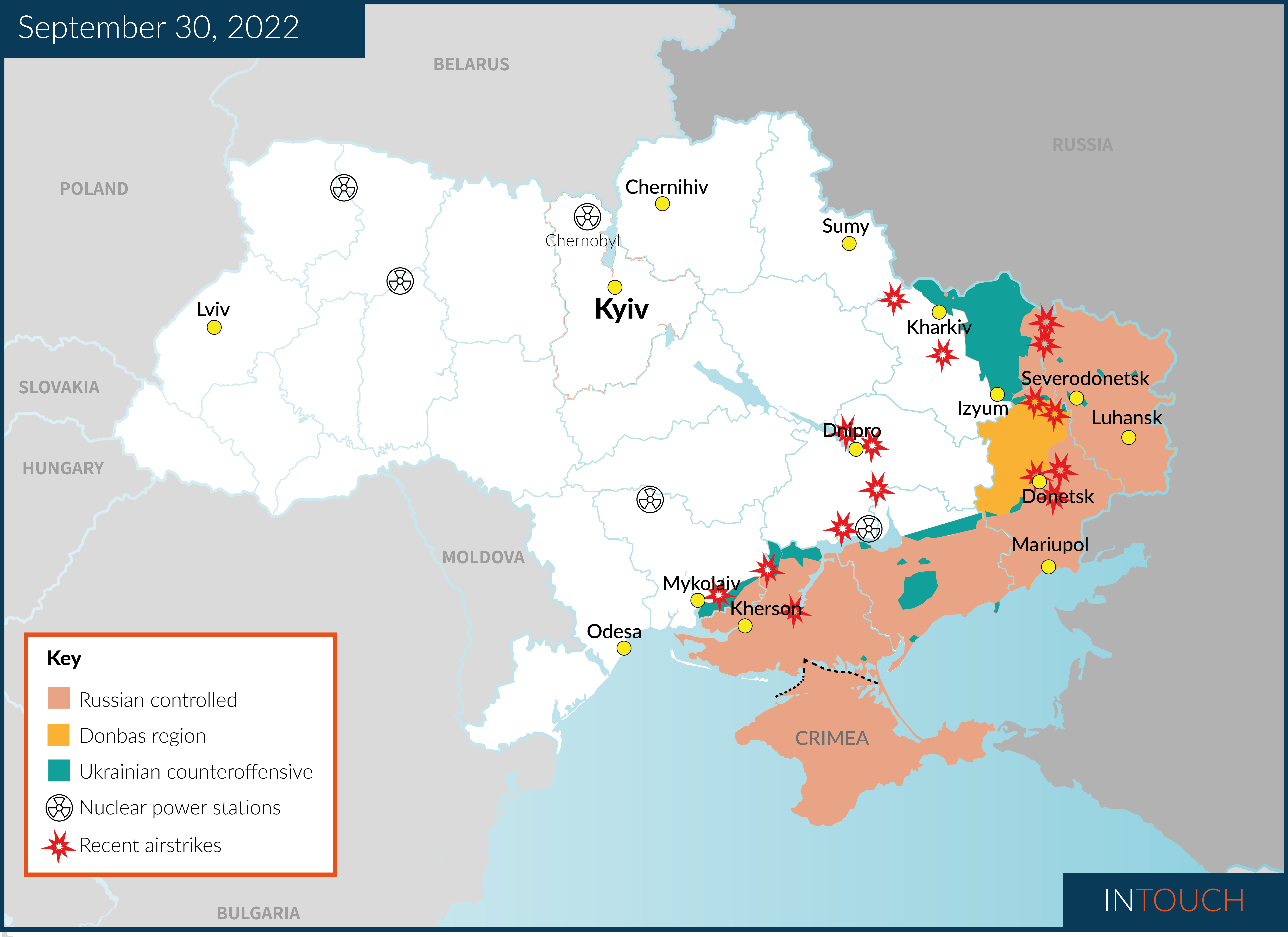 Russian President Vladimir Putin is set to host a signing ceremony in Moscow on Friday, at which he will make a major speech at the Kremlin, announcing the annexation of four more areas of Ukraine, declaring them to be ‘independent’. The development is a major escalation in the conflict and comes after self-styled referendums - condemned by Ukraine and the West as a sham - were conducted in occupied territories earlier this week. The votes were held in Luhansk and Donetsk in the east, and in Zaporizhzhia and Kherson in the south, with Russian-backed officials claiming almost total popular support despite reports of voters being intimidated by military personnel. In presidential decrees issued late on Thursday, Putin stated: “I order the recognition of the state sovereignty and independence” of Zaporizhzhia and Kherson. Both Donetsk and Luhansk have already been declared independent by Moscow, in a controversial move which preceded the start of Russia’s invasion of Ukraine earlier this year.

The hastily organised ‘sham’ referendums carried out in occupied parts of Ukraine involved no independent monitoring of the process, as Russian election officials went door-to-door escorted by soldiers. Russian state media claimed that the use of armed guards was necessary for security purposes; however, reports from the ground suggest voters were required to verbally dictate their votes to the election officials and soldiers, who would then mark their answer on a sheet and keep it. It’s unclear if voters were able to see whether soldiers marked their votes down accurately.  Russian-appointed officials have been calling for annexation in occupied territory for several months now, with votes originally rumoured to be planned for November. It appears Ukraine's recent military successes in September counteroffensives forced the Kremlin to accelerate its timeline in the face of losing ground as the Ukrainian forces recaptured large swathes of the north-east. This week, Kyiv also claimed its forces were encircling Russian troops in the strategically important city of Lyman, in Donetsk.

The votes also follow a controversial announcement by Putin to call-up military reservists. The Russian president also threatened to use all means at his disposal, including nuclear weapons, to defend what he claimed to be Russian territory. It’s feared that by annexing occupied parts of Ukraine, Putin intends to portray Ukrainian counteroffensives to retake captured land as an attack on sovereign Russia, and he may go so far as to claim that Russian territory has come under attack from Western weapons, in a bid to force Western governments to falter in their military aid to Ukraine – something Ukrainian President Volodymyr Zelenskyy has repeatedly insisted has made a significant difference in allowing the Ukrainian forces to take the upper hand amid recent counteroffensives.

The anticipated declaration of annexation for Donetsk, Luhansk, Kherson, and Zaporizhzhia is reminiscent of Russia's annexation of Crimea in 2014 - which similarly followed a widely discredited referendum. Eight years on, the annexation of Crimea has never been recognised by the vast majority of the international community, paving the way for the latest series of annexations to be met with a similar dismissal by most of the world. Russia's two houses of parliament will formally ratify the annexation treaties next week, with Putin expected to address the upper house of parliament on 4 October.

The Ukrainian reaction to the referendums and subsequent declarations of independence and the move to annex the regions has been one of dismissal. Zelenskyy has described the "pseudo-referendums" as worthless and has insisted that the Kremlin’s declarations cannot change the Ukrainian reality, before threatening that annexation initiatives will be met with consequences. "The territorial integrity of Ukraine will be restored. And our reaction to recognition of the results by Russia will be very harsh”, said Zelenskyy in a nightly address to the nation. Ukraine's foreign minister has also warned the sham votes will not have any influence on the battlefield.

The occupied areas of the four regions set to be annexed by Moscow make up 15 percent of Ukraine’s sovereign land, and it’s worth noting that Russian forces and Russian-backed separatist forces don’t fully control any of the four regions. While most of Luhansk is in Russian hands, Moscow only controls 60 percent of neighbouring Donetsk and the war continues to rage along the front lines in all four areas. The capital of the southern region of Zaporizhzhia is also firmly under Ukrainian control, and a counteroffensive remains under way in Kherson to retake land around the provincial capital city.

The US has announced its intention to impose further sanctions on Russia in response to the referendums, while the EU is similarly considering an eighth round of measures, including sanctions on officials involved in the votes. German Foreign Minister Annalena Baerbock stated on Thursday that provisional reports indicated the vote had been “the opposite of free and fair elections”, condemning the foregone result as “dictated peace”. Meanwhile, UN Secretary General Antonio Guterres has warned that Russia’s annexation would violate the UN Charter and would effectively hold “no legal value”. Guterres also described the move as a “a dangerous escalation” of the conflict, which he claimed had “no place in the modern world” and “must not be accepted”. The remarks from Guterres come as the UN Security Council (UNSC) prepares to meet on Friday ahead of a scheduled discussion over recent leaks discovered in the Nord Stream gas pipeline, which has sparked accusations of deliberate Russian sabotage from the EU – a charge Moscow has denied. The US is also understood to be leading efforts working on a draft resolution for the UNSC to condemn Russia’s organisation of the so-called referenda and to call for Moscow’s immediate and unconditional withdrawal from Ukraine. Russia retains a veto in the UNSC, meaning all eyes will be on India and China’s responses to the draft resolution, as well as an upcoming General Assembly vote.