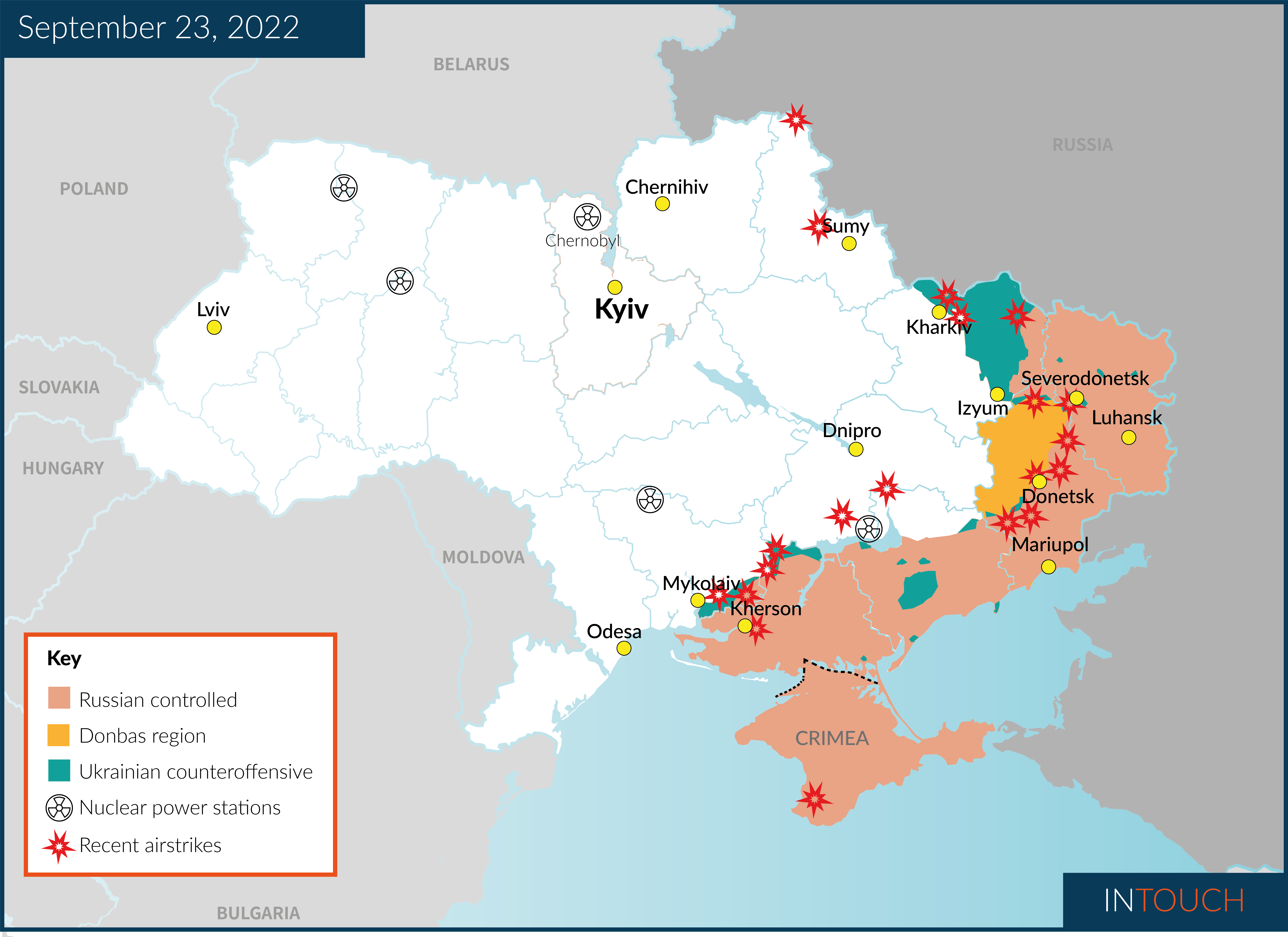 As Ukraine’s counteroffensive efforts continue to battle Russian forces for control of occupied territory, two key developments have dominated headlines this week. In a rare, televised address to the nation, Russian President Vladimir Putin announced plans to call up military reservists to fight with the Russian war effort in Ukraine. The news has been accompanied by statements from the Kremlin accusing the West of inaccurately portraying the apparent successes of the Ukrainian counteroffensive and insisting the Russian forces in Ukraine are holding ground. Meanwhile, plans to stage referendums in Russian-held parts of Ukraine on joining Russia have been accelerated, sparking international outcry.

Putin’s decision to announce a partial military mobilisation has allegedly triggered a flock of fighting-age men to flee the country as they reportedly attempt to avoid being drafted into the war. The move has been called a necessary step to ensure "Russian territorial integrity", with Putin also accusing the West of wanting to weaken Russia and threatening to retaliate. The partial military mobilisation would see some 300,000 people drafted, although some fear that the call-up will impact a much higher figure than has been officially announced, as independent media sources suggest Putin’s decree contains a discreet classified paragraph allowing for a call-up of up to a million people.

Evading the draft is a criminal offence in Russia. Nevertheless, border traffic into neighbouring countries is said to have increased exponentially since Putin’s announcement, with long queues forming at the Finnish, Lithuanian, Latvian, and Georgian borders. Finland has indicated that traffic across its south-eastern border is more busy than usual, but still manageable, while miles-long queues of vehicles are understood to have formed at the border with Georgia. A ban on crossing on foot remains in effect, prompting many to take to bicycles or motorbikes to bypass lines of cars and evade the ban. Many of those who have made the crossing report having queued for up to 12 hours.

Georgia is one of the few neighbouring countries Russians can enter without applying for a visa. Ticket prices for flights to European and Middle Eastern countries have also rocketed, with many flights to destinations like Belgrade, Istanbul, and Dubai sold out completely. Turkish media has reported a massive spike in one-way ticket sales exiting Russia, while Germany has indicated that fleeing Russians would be welcomed into the country. Meanwhile, Lithuania, Latvia, Estonia, and the Czech Republic have suggested they would not offer fleeing Russians refuge.

The call-up has triggered protests in Russian cities, including St Petersburg and Moscow. In response to the demonstrations, Russian security forces have met protesters with force. Hundreds of arrests have been made, with reports suggesting more than 1,300 people have been detained so far. Unconfirmed reports have also claimed that many of those detained have been forced to sign military draft papers whilst in custody. Responding to the claims, a Kremlin spokesperson issued a statement that doing so violated no laws. Amid the protests, the Kremlin has claimed that reports of fighting-age men fleeing the country have been exaggerated.

The reaction to the call-up within Russia has been unusually strong, in a country which so closely monitors public expression. The British Defence Ministry has labelled the move a “considerable political risk” and an effective “admission that Russia has exhausted its supply of willing volunteers to fight in Ukraine”. Ukraine’s response to the call-up has been to support those protesting the move and others fleeing the country, as Ukrainian President Volodymyr Zelenskyy urged more Russians to resist the mobilisation. “Fight back. Run away. Or surrender to Ukrainian captivity”, said Zelenskyy in his nightly address on Thursday.

Russian-backed officials in four occupied regions of Ukraine aim to hold self-styled referendums on joining Russia. Originally speculated to be planned for November, the timeline of the votes has been suddenly accelerated – for reasons analysts suspect link to the recent progress made amid the Ukrainian counteroffensive, as Kyiv’s troops retake more ground. The votes are taking place over five days in four areas along the front line – in Luhansk and Donetsk in the east, and in occupied parts of Kherson and Zaporizhzhia in the south - accounting for 15 percent of sovereign Ukraine.

Plans to hold so-called referendums in occupied Ukrainian territory have drawn condemnation from Western nations, with the US, Germany, and France indicating the results – which are widely seen as a foregone conclusion in favour of annexation - will not receive international recognition. Even Turkey, which has sought to position itself in a mediating role, has condemned the vote as illegitimate. The vote aims to legitimise installing Russian authorities in a more permanent capacity in occupied territory but are widely being dismissed as “sham” ballots.

The four regions involved are all either partially or completely under occupation with frontline fighting on their doorsteps – making a secure, transparent vote impossible. Indeed, in Zaporizhzhia, the regional capital city remains in Ukrainian hands – making any vote to annex the region seem aspirational, at best. Russian media claims electoral officers plan to go door-to-door in occupied territory with portable ballot boxes from Friday 23 September to Monday 26 September, with polling stations opening on the fifth day, Tuesday 27 September. Russian officials have cited security reasons for the unusual approach, which arguably leaves voters vulnerable to manipulation and intimidation. Some refugees are reportedly also able to vote in parts of Russia itself – opening the vote up to more fraud.

The vote has been described by observers as the first of a three-step programme designed by the Kremlin to reset the war as Putin navigates an unexpectedly successful Ukrainian counteroffensive. Annexation could lead to claims by Russia that Russian territory is coming under attack from weapons supplied to Ukrainian troops by NATO and other Western nations, which would further escalate the war. The second step is to call-up reserve troops to help fight Ukrainian forces and defend a 1,000km-long frontline, while the third step is thought to have been criminalising desertion, surrender, and soldiers going absent without leave. Despite the developments, Kyiv has insisted that nothing will change, regardless of the vote outcomes, and that Ukrainian forces will continue with their goal to liberate occupied territories.