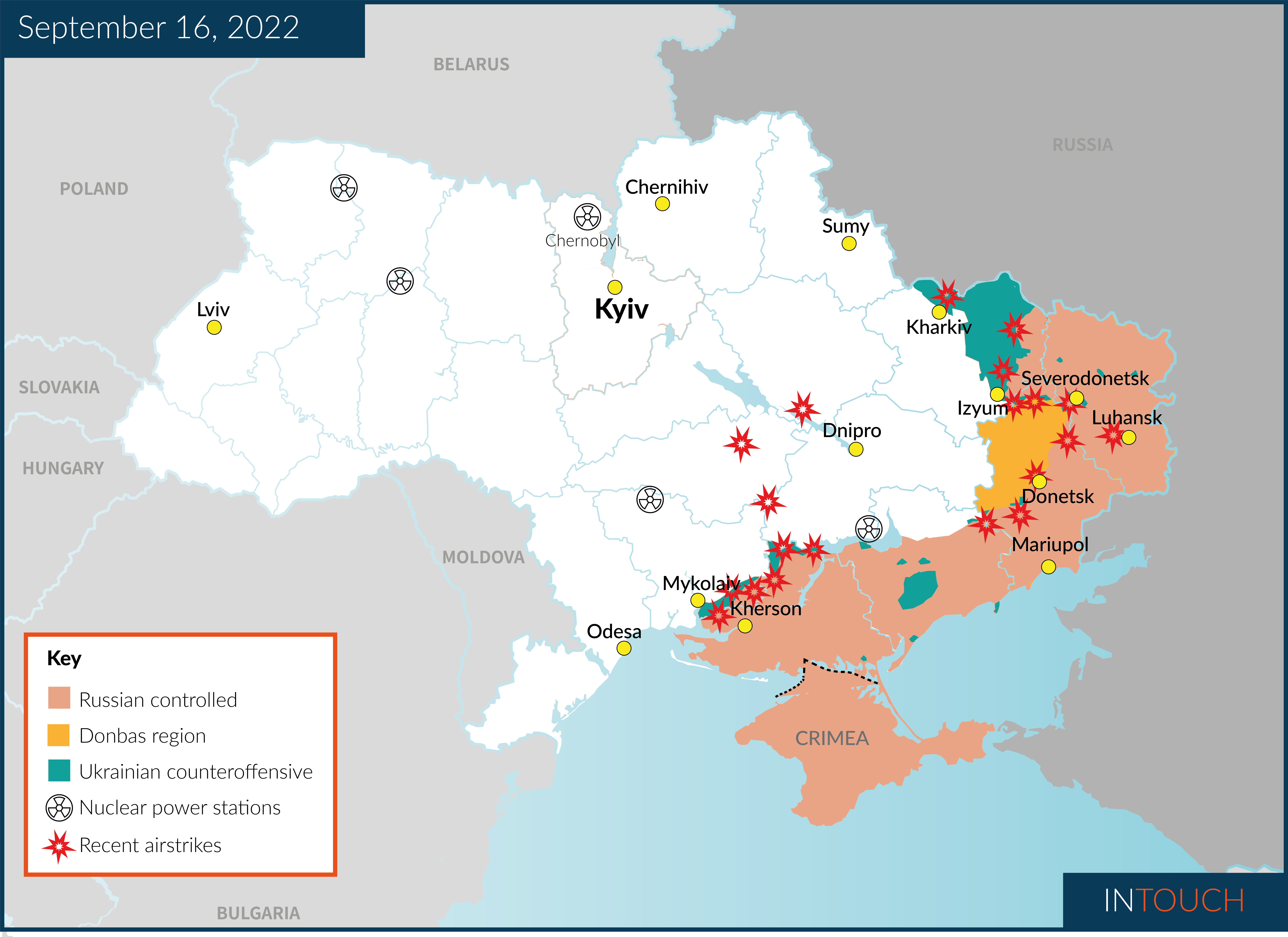 Major gains have apparently been made in the east and south of Ukraine amid a swift counter-offensive, with President Volodymyr Zelenskyy claiming Ukrainian troops have retaken more than 8,000 square kilometres so far this month – Kyiv’s most significant territorial gains since the war started. While swathes of territory have reportedly been retaken in the eastern Kharkiv region, a separate Ukrainian counterattack continues to press on in the southern Kherson region, although troop advances have been comparatively slower to make substantial progress. Ukrainian citizens have reportedly been celebrating the liberation of occupied areas, as Ukraine’s counteroffensive marks a new phase of the war; however, celebrations have been marred by emerging evidence of the severely damaging impact of Russian occupation on many villages and residents, sparking fresh allegations of Russian war crimes.

The pace of the Ukrainian advance following the launch of its counteroffensive appears to have taken Moscow by surprise as Russian forces have been forced to retreat. In some cases, unconfirmed reports have also claimed that Russian soldiers have traded their uniforms for civilian clothing in a bid to escape the fighting and blend in. In a rare admission, Moscow has confirmed the withdrawal of Russian forces from some towns in the Kharkiv region, but has refused to admit defeat, instead insisting Russian troops were not retreating, but ‘regrouping’.

In the Kharkiv region, the cities of Izyum and Kupiansk have been retaken as of 10 September. Both cities are key supply hubs for the Russian forces and reflect critical strategic gains for Kyiv. Russian positions in much of the Kharkiv region are believed to have totally collapsed and Russian forces suffer a major military defeat in the area. The Russian withdrawal has been described by military experts as one of the most dramatic reversals seen amid the war since the Russian retreat from Kyiv earlier this year. Nevertheless, Russian forces are likely to continue to target recaptured areas with military strikes.

As Ukrainian troops have increasingly retaken more occupied territory – including some villages which had been occupied since the early days of the war - more and more allegations of torture and arbitrary detention at the hands of Russian soldiers have emerged. Recently liberated Ukrainian civilians have been regaling tales of being arrested and held in prison cells for months on arbitrary charges, such as being in possession of the Ukrainian flag, or for reportedly having relatives in the Ukrainian forces. Accounts of electrocution and mental torture have also emerged. Russia has repeatedly denied targeting or torturing civilians, among other war crimes.

The southern city of Kryvyi Rih has seen residents evacuate in some areas after eight Russian missiles struck the Karachunivske reservoir dam on Wednesday. The situation there is said to be under control, with Zelenskyy – who was born in the city – criticising the strike as Russian revenge for Ukraine’s apparent successes amid a recent counteroffensive. Describing Russia as a “terrorist state”, Zelenskyy condemned Moscow for targeting civilians, saying the reservoir has no military value. Meanwhile, Russian-backed separatist officials have blamed Kyiv for a fatal bomb blast which killed two separatist prosecutors in Luhansk, calling the explosion a “terrorist attack”.

Earlier in the week, Zelenskyy had visited the recently recaptured city of Izyum, in the Kharkiv region. The city is a key logistics hub connecting the eastern and north-eastern regions. During his visit, the president thanked troops who had led the counteroffensive and pledged to return the Ukrainian flag to every city and village in the country. Zelenskyy stated that the Russian occupation of Izyum had left a trail of death following the discovery of a mass grave containing the remains of some 440 people in Izyum. It has yet to be verified precisely how most of the deceased were killed, although unconfirmed accounts suggest many died amid bombings and due to a lack of healthcare. There are also thought to be signs that some of those buried may have been Ukrainian soldiers. Exhumations are underway, with Zelenskyy expected to deliver clearer findings to the media within the next few days.

Russia is still estimated to control around a fifth of Ukrainian territory in eastern and southern regions – mostly towns in the Donbas which were either already held by Russian-backed separatist rebels or which fell during the first few days of the war. As Ukraine’s counteroffensive continues to see gradual success, these remaining occupied areas are expected to see increased fighting and strikes as Kyiv aims to retake as much territory as possible in a big sweep, before the winter months prohibit troops movement. Moscow has insisted that it will press on with its “special military operation” in Ukraine, until its goals are achieved; however, Moscow has redefined its goals before - when Russian troops were withdrawn from northern Ukraine as Moscow claimed its main operational focus was in the east after failing to seize the Ukrainian capital – and may do so again, if put at enough of a military disadvantage.

New reports detailing alleged Russian abuse and torture of civilians in occupied areas have been met with international condemnation. The UN plans to send monitors to Izyum in response to claims surrounding the discovery of the mass grave. Leaked footage has also emerged, confirming long-running speculation that the shadowy Wagner mercenary group bolstering Russian forces have been attempting to recruit prisoners, offering to commute sentences in exchange for service. The development not only confirms how thinly spread Russia’s occupying forces are, but also exposes the lengths the Kremlin is willing to go to, and the laws it will bend or violate, in order to persevere with its invasion of Ukraine. Russian law doesn’t allow for the commutation of prison sentences in exchange for mercenary service, while international law prohibits the use of mercenaries in armed conflict altogether – a fact Russia itself has previously attempted to exploit by falsely labelling captured British volunteer fighters as mercenaries as an excuse to put them on trial.

Meanwhile, Russian President Vladimir Putin has attended the Shanghai Cooperation Organisation summit in Uzbekistan’s Samarkand this week, taking the opportunity to meet with Chinese President Xi Jinping. The visit is only Putin’s second international trip he has undertaken since Russia launched its invasion of Ukraine in February. During the meeting, Putin reportedly acknowledged China’s “concern” over the situation in Ukraine, but also praised Beijing for a “balanced position” and suggested China was willing to work with Russia in the face of perceived US attempts to “create a unipolar world”. While China hasn’t explicitly endorsed Russia’s invasion of Ukraine, it also hasn’t condemned it, and has strengthened trade and other ties with Moscow within the last six months.

Amid the rapid developments in Ukraine’s counteroffensive, German Chancellor Olaf Scholz has stated that Putin refuses to consider the possibility that Russia’s invasion of Ukraine may have been a mistake. After holding a phone call with the Russian president on Tuesday, Scholz said he had urged Putin to withdraw troops and return to the negotiation table with Ukraine, insisting it was the only viable path to achieving peace in the region; however, Putin had reportedly not changed his position and instead blamed Ukraine for the continued fighting. Meanwhile, NATO has issued a statement on Friday, warning that the recent success of Ukraine’s counteroffensive should not be mistaken as a beginning of the end of the war.