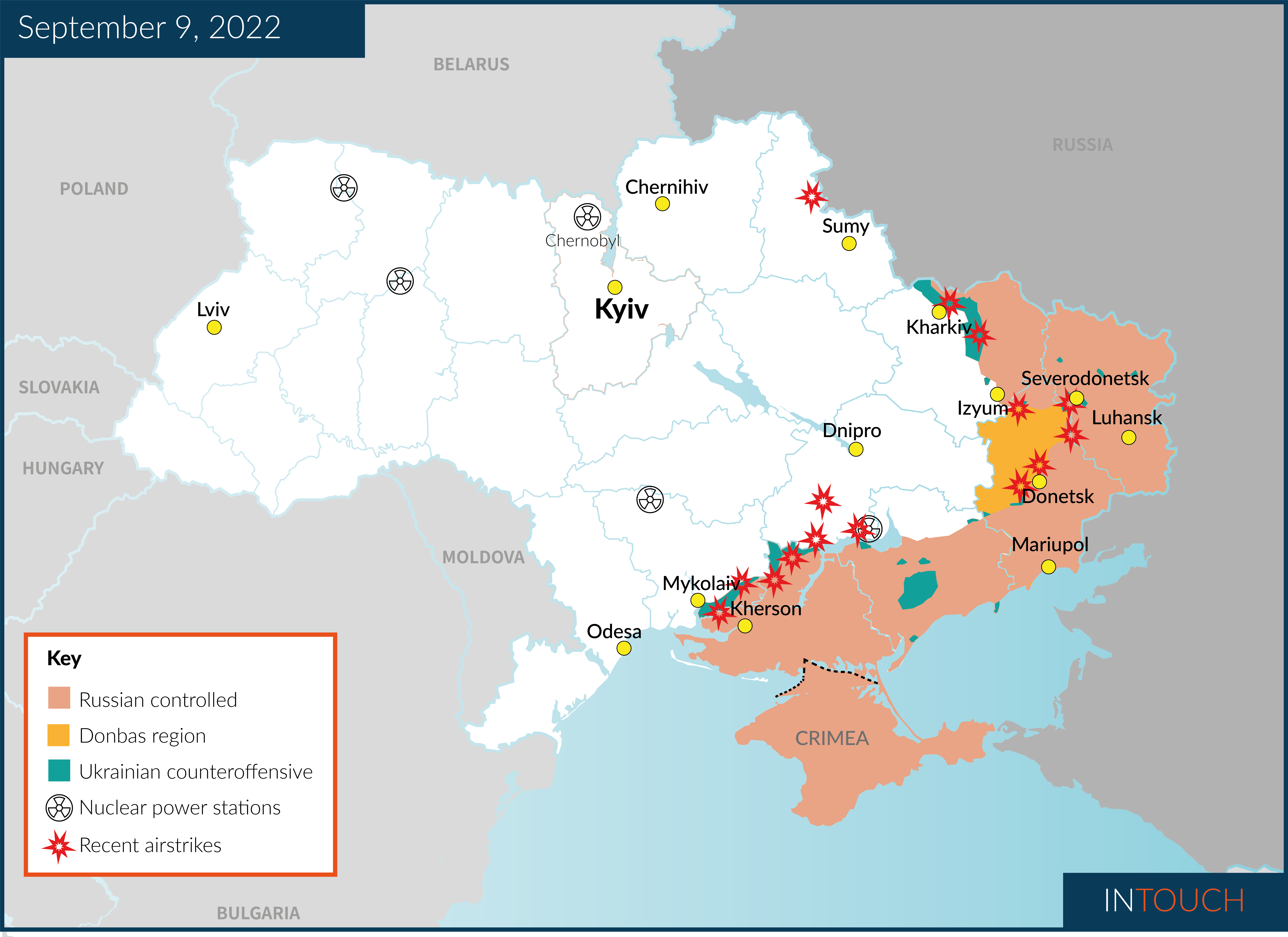 Ukrainian President Volodymyr Zelenskyy has claimed “good news” amid developments in the last week, as Ukraine’s eastern advance reportedly sees progress. Zelenskyy claims Ukrainian troops have successfully recaptured settlements in the eastern Kharkiv region, although no specific details regarding which areas had been retaken have been released. The apparent success comes after similarly vague reports of limited progress being made amid the Ukrainian counteroffensive in the southern occupied Kherson region. Meanwhile, Russian occupying forces aim to hold a vote on annexation in early November. News of the planned vote comes as Kyiv claims responsibility for a series of explosive attacks targeting Russian bases in Crimea – confirming the expansion of the war in Ukraine to the annexed region.

President Zelenskyy’s statement claiming the recapturing of occupied territory has lent evidence to speculation of a possible breakthrough in the eastern Kharkiv region, where a counteroffensive is believed to have been making progress in areas north and north-east of Kharkiv city. Zelenskyy refused to name which places had been retaken stating that it was not the time to name the settlement “to which the Ukrainian flag returns”, but intelligence reports suggest the area reclaimed amounted to approximately 1,000 square kilometres since the beginning of the month. Ukraine’s military command has remained tight-lipped about operational security and military goals in recent weeks as various counter-offensives get underway in the east and south of the country. US intelligence has indicated that Ukrainian troops have been making slow but meaningful and steady progress.  It’s believed Ukrainian forces may be closing in on the strategically important city of Izyum – a key link for Russia’s military supply chain. Although Ukrainian forces continue to be outnumbered, it’s been suggested they are outperforming Russian troops in some areas; however, the situation remains fraught, as both sides face pressure to establish where the winter frontline will fall.

In occupied areas, Moscow has proposed a provisional date of 4 November for an annexation vote. Reports from the ground indicate that those living in occupied areas have faced intense pressure from Russian authorities to comply with the vote, which would provide Moscow with the pretence of legitimacy and enable the Kremlin to claim a reason to retain forces in the area.

In the north-eastern region of Sumy, reports have claimed that a Russian airstrike hit a hospital in Velyka Pysarivka – an area bordering Russia – on Friday morning. Ukrainian officials from the region have claimed the strike destroyed a hospital building and has resulted in an unconfirmed number of casualties. Moscow has continued to deny targeting civilians through the war.

Elsewhere, intense shelling continues to draw concern in Zaporizhzhia, following a recent visit by the UN nuclear watchdog to the Zaporizhzhia nuclear power plant. Zelenskyy has backed a call by the International Atomic Energy Agency’s team to establish a safety protection zone at the site, which has been occupied by Russian forces since March. The UN also reiterated calls for shelling near the plant to end immediately, as both sides continue to blame the other for recent shelling. Ukraine’s nuclear chief has suggested that a UN peacekeepers mission could help secure and maintain the safety and integrity of the site, while also calling for Russian troops to withdraw from the plant – a request unlikely to be met. If heavy fighting continues, Ukraine has warned that it may have to shut down the plant to avoid a disaster.

Kyiv has claimed responsibility for a series of air strikes in Crimea, including the deadly attack on the Saky military base, which killed one person. Kyiv's top commander Valeriy Zaluzhnyi confirmed that Ukrainian rockets had targeted a number of Crimean military sites, including Saky airbase, claiming the attack took 10 Russian warplanes out of action. Having previously refused to acknowledge or deny involvement, Ukraine’s admission follows a month of uncertainty over who was behind the attacks and effectively confirms the expansion of the conflict into the Crimean Peninsula – an area which Kyiv has repeatedly implied it aims to retake.

Meanwhile, Kyiv has also called on European leaders not to waiver in their support of Ukraine, with officials expressing awareness that Europe's main focus may begin to shift towards tackling the challenges presented by the energy crisis ahead of winter. President Zelenskyy issued an emotional appeal this week to remind the EU that, without continued European war support, Ukraine's difficulties will be ten times worse than those facing the rest of Europe. A surprise visit by the US Secretary of State Antony Blinken to Kyiv saw the top US politician describe the war as being at a “pivotal moment” as he announced a US pledge of $2.2bn in new security assistance.

The UN and the US have expressed concern over increased reports of Ukrainian civilians being displaced amid credible allegations of forced transfers to Russian-occupied territory, or to Russia itself, with children being offered fast-tracked Russian citizenship and adoption into Russian families. The UN has warned that, if true, such moves would breach the Geneva Convention. The US has also strongly condemned reports of a Russian filtration system, indicative of a massive campaign by the Kremlin to forcibly displace, deport, imprison, or disappear Ukrainian citizens.