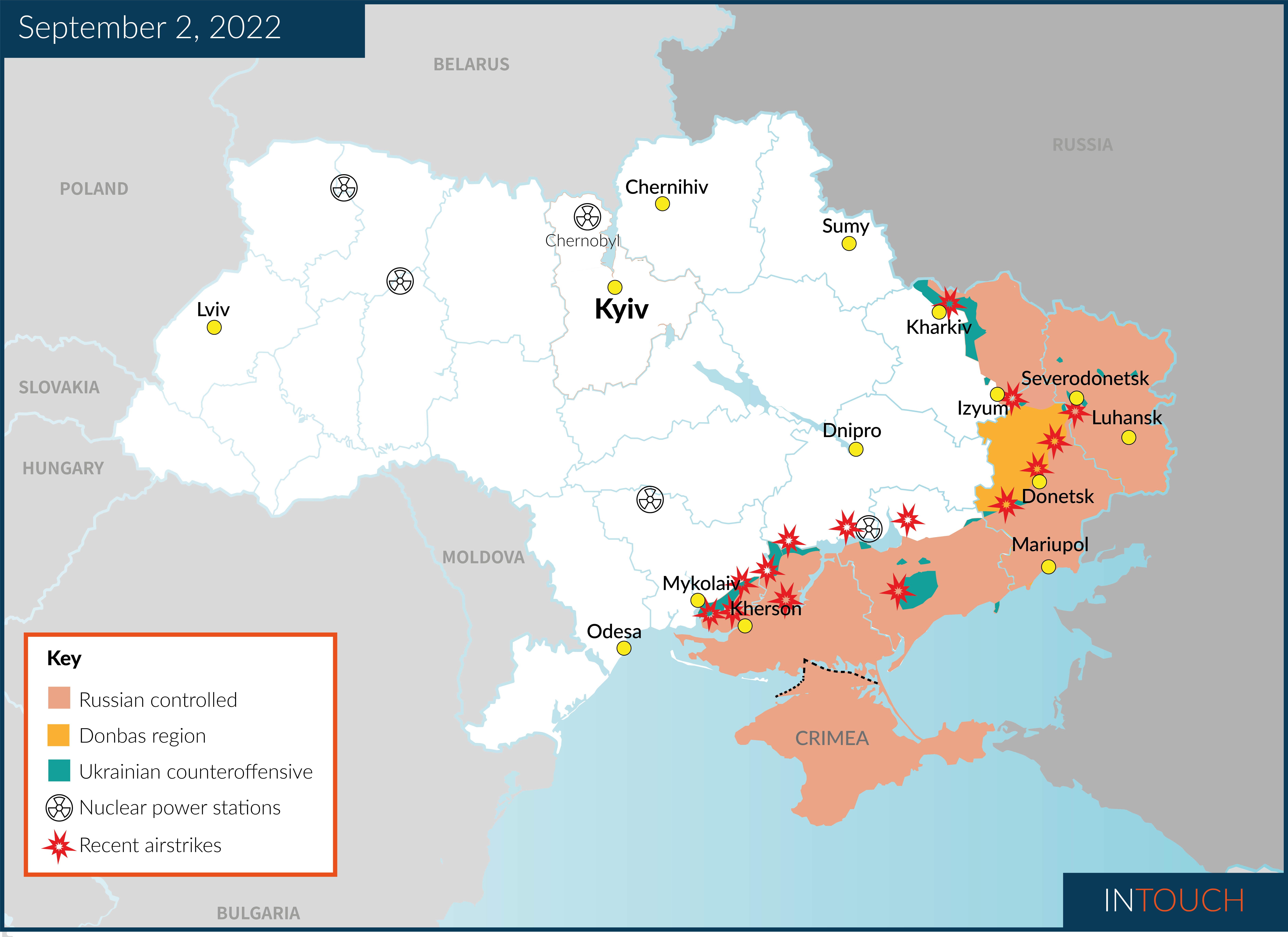 Ukraine is bracing to launch a major counter-offensive in the east of the country, as another offensive to retake the occupied Kherson region in the south also gets underway. Fierce fighting has been increasingly reported throughout Kherson; however, observers suggest progress in the region will neither be fast nor easy for Ukrainian troops in light of a determined Russian defence. Meanwhile, an investigation team deployed by the UN’s nuclear watchdog, the International Atomic Energy Agency (IAEA), has reached the Zaporizhzhia nuclear power plant this week, with preliminary findings from an initial inspection appearing to back concerns over a heightened risk of nuclear disaster amid claims of increased fighting in the surrounding area.

The overarching Ukrainian military offensive goal appears to be to extend the counter-offensive, which is underway in the south of the country, by joining it up with the frontline in the east and launching efforts to retake lost territory in the Donbas region and in the northern Kharkiv area, where intense fighting continues to take place.

Kherson remains the only city west of the strategically important Dnipro River to have been captured by Russian forces amid the invasion of Ukraine. Kyiv’s long-planned counter-offensive in the south has reportedly seen Ukrainian forces break through Russia’s first line of defence in at least three places; however, Moscow has claimed that Russian troops have defeated failed Ukrainian attacks. Russia also claimed there had been heavy casualties inflicted upon the Ukrainian troops.

With Ukrainian military officials remaining strictly tight-lipped about the operation and its progress, few claims from either side have been independently verified. Kyiv has urged the Ukrainian public to exercise patience. Heavy fighting continues on the ground, with shelling and artillery exchanges reported virtually round the clock, with battles for key positions underway. At least three strategic bridges crossing the Dnipro River have been rendered impassable by Ukrainian strikes, while US-supplied (HIMARS) precision rocket systems have also been utilised by Ukrainian forces targeting makeshift Russian pontoon bridges, along with ammunition depots, warehouses, and command posts. The HIMARS strikes come as part of a wider Ukrainian attempt to cut Russian forces on the western bank of the river off, isolating them from the main bulk of the Russian military presence in Kherson.

Officials in Kyiv have been keen to warn the public against expecting a quick progress in Kherson, with military analysts generally agreeing that a slow and gradual weakening of Russia’s defences, combined with an equally gradual strengthening of Ukrainian forces with Western support, is the approach most likely to see long-term success for Ukraine. One major downside of the approach, however, is that if the right balance of weakening and strengthening isn’t met, it risks descending into a military stalemate by the time winter comes. Ukrainian officials have freely admitted that the main window of opportunity to launch a successful counter-offensive is from now until mid-October, as the Ukrainian forces need to make the most of more favourable weather conditions, before seasonal changes make transporting troops and equipment across the Ukrainian countryside infeasible due to impassable muddy lanes. Meanwhile, occupying forces in Kherson are continuing efforts to organise a closely controlled annexation referendum in the region in the coming weeks. Such a referendum is expected to be widely dismissed by Ukrainian authorities and wider international officials as a sham, designed to create the illusion of legitimacy for Russian occupation.

Among the main international developments this week is the arrival of the IAEA monitoring and inspection team at the Zaporizhzhia nuclear power plant. Initial findings from the team’s first inspection of the site indicate that the physical integrity of the complex has been compromised by frequent attacks in the immediate and surrounding areas as heavy fighting persists in the Enerhodar district. The mission’s first statement comes as Ukraine and Russia continue to trade blame for recent shelling. Ukraine’s state nuclear company, Energoatom, has warned it will be “difficult” for the IAEA team to make an impartial assessment of the situation at the Zaporizhzhia plant due to anticipated Russian interference, with reports on Thursday indicating that the team were restricted from accessing the plant’s crisis centre, where Russian troops are believed to have been stationed.

The situation at the plant is said to be volatile as a portion of the 13-strong IAEA team is set to stay behind for further assessment for at least another few days, with a longer-term goal of establishing a more permanent presence at the plant. President Zelenskyy stated the IAEA mission to the Zaporizhzhia nuclear plant could still be of vital importance despite Russian interference at the site. Meanwhile, Russian Defence Minister Sergei Shoigu has accused Ukraine of “nuclear terrorism” and has denied deploying heavy weaponry at the plant, instead claiming that Ukrainian forces are continuing to shell the site.

In other developments, Russia has issued a thinly veiled warning to Moldova, that threatening the security of Russian troops in the breakaway region of Transnistria carries the risk of triggering a military confrontation with Moscow. Russia has stationed peacekeeping troops in Transnistria since the early 1990s, when an armed conflict saw pro-Russian separatists seize a large portion of the region. Chisinau has reiterated its commitment to a peaceful dialogue over issues surrounding the region.