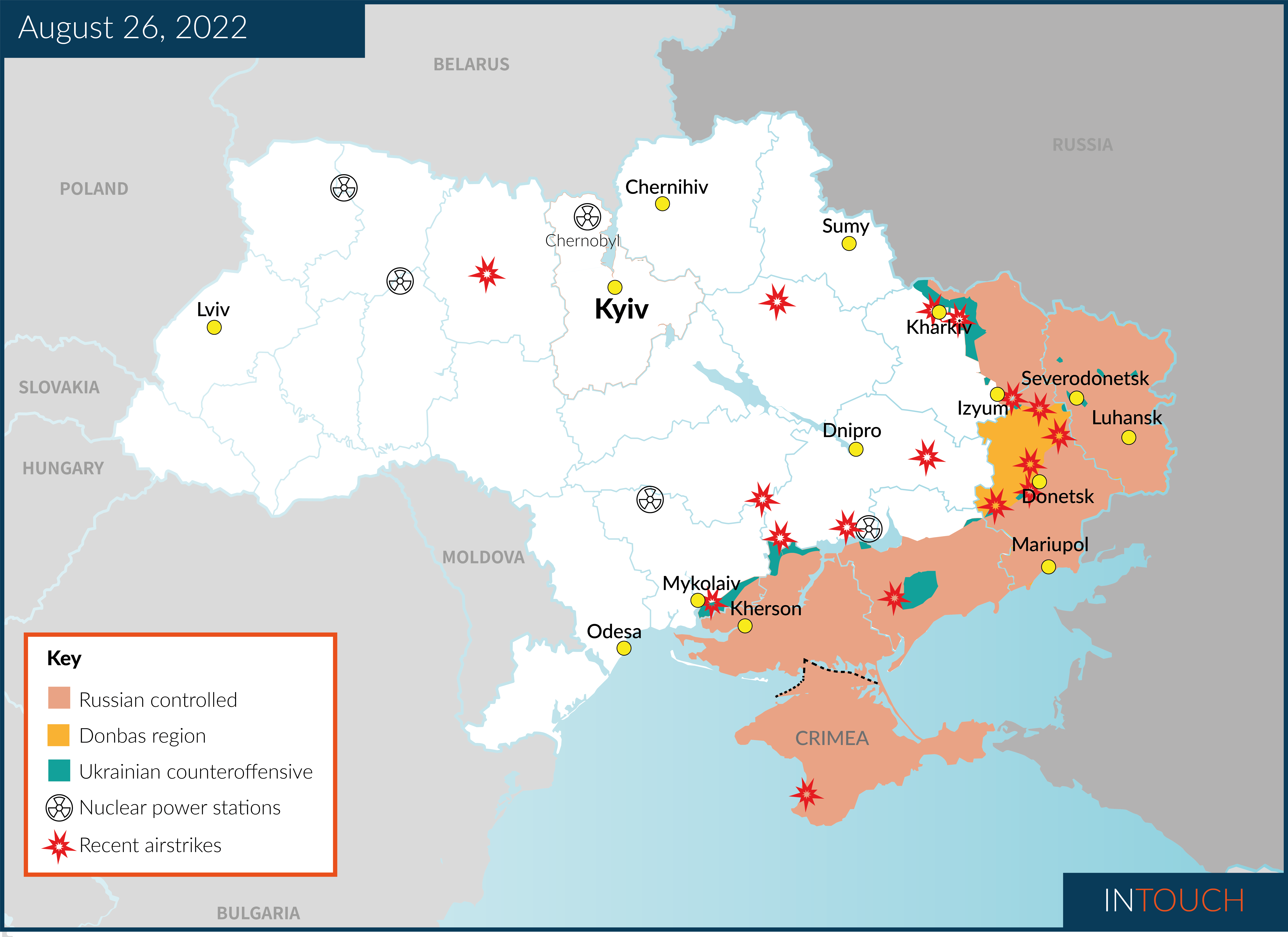 The Zaporizhzhia plant was temporarily disconnected from Ukraine’s national grid – marking the first such disconnection in the plant’s history. Ukraine’s state nuclear company, Energoatom, stated that fires at a nearby coal power plant caused the cut off on Thursday. The energy supply has since been restored; however, further information on the direct cause of the outage has not been made widely available. Ukrainian President Volodymyr Zelenskyy has warned that the world narrowly avoided a radiation disaster amid the outage.

In the neighbouring Dnipropetrovsk region, areas along the Dnieper River, including Nikopol – which sits opposite the Zaporizhzhia power plant – have continued to see increased daily shelling amid ramped up Russian attacks. The strike on Chaplyne city’s central railway station on Wednesday is believed to have resulted in the deaths of at least 25 civilian victims, while dozens more were also wounded. Kyiv claims a Russian-fired missile hit the station, as well as a nearby residential area, which is where most of the casualties were incurred. Russia has responded to reports of the deadly strike, claiming that a military train was struck near Chaplyne station whilst en route to deliver arms to Ukrainian forces on the front lines in eastern Ukraine. The Russian response made no comment regarding the alleged casualties. Elsewhere in Dnipopetrovsk, Russia’s defence ministry claims to have destroyed several Ukrainian warplanes amid raids on airbases. The raids were allegedly conducted on Thursday, targeting multiple Ukrainian bases in Dnipropetrovsk and the neighbouring Poltava region, destroying eight warplanes in total.

Further south, Ukrainian troops have continued to exert pressure on weak points in the Russian defensive lines in Kherson. The occupied city is a vital port and has become the focus of intense ‘Russification’ efforts, which have further fuelled Ukrainian resistance as Kyiv’s troops fight to regain military advantage of the strategically key city. Retaking the city would enable Ukraine to exert extensive control over the Dnieper estuary and much-needed docking capacity, while also providing Ukrainian troops with key arterial routes across the river to launch an offensive to cut off the North Crimean Canal, which connects the Dnieper to Crimea, supplying it with vital water for crop irrigation and industry.

Constant fighting in the southern port city of Mykolaiv is indicative of Moscow’s commitment to its long-term military objective of using Kherson as a base from which to launch an offensive to take Odesa and cut Ukraine off from the Black Sea; however, Ukrainian defence forces have consistently repelled Russian forces back from the city, preventing them from attempting to reach Odesa by land – a necessary prerequisite before Russia’s Black Sea fleet can launch an assault on the city from water.

As Ukraine marks six months of war, some of the key takeaways highlighted by observers have been: Ukraine’s fierce but limited defence; Russia’s military ineptitude despite months of preparation; nuclear awareness and responsibility; the effectiveness of Western arms – particularly the High Mobility Artillery Rocket System (HIMARS); and the increasingly integral role the occupied Kherson and annexed Crimean regions play amid the war. Ukraine has begun to regain some initiative amid the war in recent weeks, but has failed to make significant offensive pushes, remaining largely on the defence with counter-offensives making varied gains and losses along the front lines. Analysts have expressed concerns that, while Western allies have provided Ukraine with enough military aid and assistance to prevent a Russian victory, it has not tipped the odds far enough in Kyiv’s favour to help Ukrainian troops defeat Moscow. As the war teeters on the brink of stalling, a key question remains: what stage of occupation will constitute as a ‘victory’ for Moscow?

Russian President Vladimir Putin has made headlines again this week, as he purportedly signed a critical decree, committing the Kremlin to increasing the size of Russia’s armed forces. The move will see the country’s armed forces grow from 1.9 million to 2.04 million service members by the end of the year. The announcement comes after the daughter of one of Putin’s political allies was killed in a suspected car bombing in Moscow over the weekend. Ukraine has been blamed for allegedly orchestrating the bombing; however, Kyiv has denied responsibility.

The UN has stated that the outage at the Zaporizhzhia plant underlines the high risk of a nuclear accident and the potential for a major disaster amid increased reports of nearby shelling, reiterating calls for the Russian-held site to be demilitarised. The International Atomic Energy Agency (IAEA) – the UN’s nuclear watchdog - has indicated that negotiations to secure a monitoring team access to the site are extremely close to an agreement. IAEA Director-General Rafael Grossi stated his hopes for an IAEA inspection mission to take place “within days” once a deal has been reached.

Meanwhile, tensions have flared further afield in wider eastern Europe, as Poland accused Belarus of deliberately destroying a World War II memorial which contained the graves of Polish anti-communist resistance fighters who died battling Soviet troops. The alleged destruction of the graves come after Poland announced the demolition of a monument to Soviet troops in light of Russia’s invasion of Ukraine. No cemeteries containing Red Army graves have been disturbed in Poland and the demolished monument contained no remains. Nevertheless, its demolition is likely to have upset Belarus – a key Russian ally – as it supports symbolic ‘de-Russification efforts’ in Ukraine, amid an attempt by Kyiv to sever its common history with Russia. Two other Polish wartime cemeteries in Belarus have also been destroyed since July, while the Polish minority are reportedly being discriminated against, with leaders and prominent figures facing arbitrary arrest.