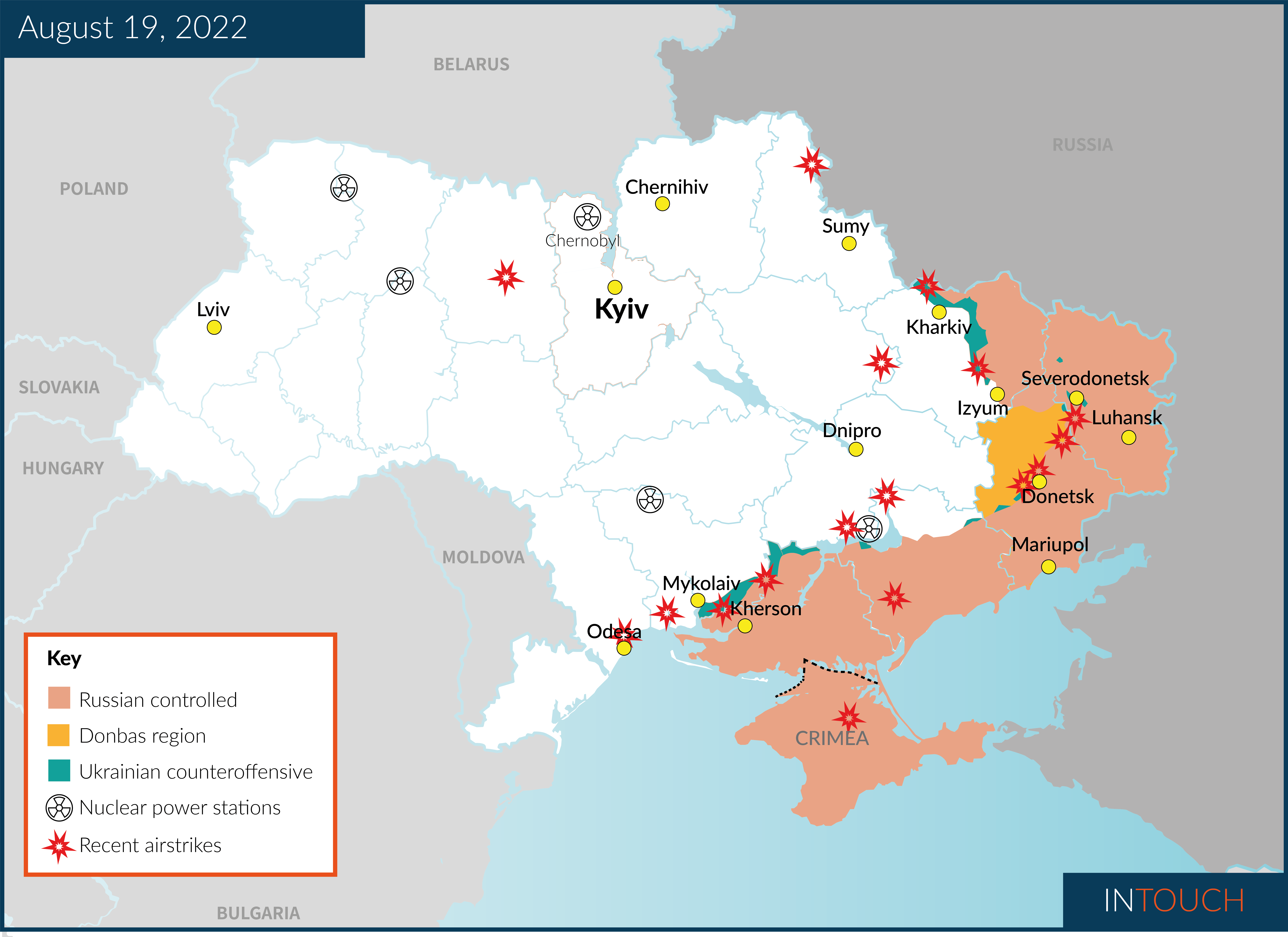 Intense shelling has been reported across parts of the Donetsk region over the past week, with increased fighting affecting frontline areas, such as Bakhmut, Avdiivka, and Sloviansk. There has been a distinctive increase in clashes along the frontline in Donetsk, while Ukraine and Russia continue to trade accusations amid increasing tensions in Enerhodar, Zaporizhzhia – where Europe’s largest nuclear power plant site remains under extreme pressure amid new reports of shelling in the immediate and surrounding area. The Crimean Peninsula has also seen further explosions hit Russian military facilities, leading to heightened tensions in the region.

Ukrainian military officials claim their forces have repelled multiple Russian ground assaults near Sloviansk, Bakhmut, Siversk, Pisky, and Avdiivka in the Donetsk region over the course of the last seven days. Russian claims of capturing Pisky have been dismissed by Ukraine. Russian advances on Lozova, Soledar, and Shyroke were also reportedly defeated. Russian offensives on Horlivka and Zaitseve in Donetsk saw limited success, while Russian forces continue to push outward from the occupied provincial capital city of Donetsk. Kramatorsk has also come under fire, after Russian forces allegedly launched 11 rockets at the city, forcing civilians to flee and damaging residential properties.

In neighbouring Luhansk, regional authorities suggest Ukrainian partisans in the occupied village of Verkhnokamyanska have continued to resist Russian occupation. It’s also been suggested that occupation forces in Luhansk are deploying intimidation tactics on those who have been made homeless by the conflict, forcing them to vote in a referendum held by Russian authorities on the future of the region.

In Zaporizhzhia, tensions continue to mount around the nuclear power plant, with Ukrainian President Volodymyr Zelenskyy stating that the deaths of 13 civilians amid the shelling of Marhanets - located near the nuclear plant – wouldn’t go unanswered. The civilians were allegedly killed amid a barrage of 80 rockets purportedly fired by Russian forces. Ukrainian sources also claim Russian forces shelled the nuclear power plant from the direction of Vodyane, partially destroying the plant’s fire station and the first block of the pumping station at the plant’s thermal underground communications facility. Russian military officials have refuted the claim, instead accusing Ukrainian forces of shelling the power plant and the neighbouring city of Enerhodar. Ukrainian technicians at the plant are said to be under immense pressure to maintain operational stability and security but are understood to be staying on in the interest of preventing a Chornobyl-level disaster. Meanwhile, Ukraine’s state nuclear energy firm, Energoatom, claims its website was attacked by Russian-based hackers. Elsewhere in Zaporizhzhia, UK military intelligence suggests companies in Russian-occupied Melitopol have told workers that Ukraine is being partitioned, referring to ‘west Ukraine’.

In occupied southern regions, Ukrainian military command has reported the alleged destruction of a Russian artillery ammunition warehouse north-west of Kherson city. Russian advances on Novosilka and Osokorivka have allegedly been repelled. Since the beginning of the month, Ukraine claims to have liberated 53 Kherson settlements from Russian occupation. Occupied territories have reported increased efforts by Russian administration to gather census information, while those challenging their authority are reportedly met with intimidation and threats, with healthcare workers reportedly at risk of dismissal unless they accept wages in Russian currency. Further south, in the annexed Crimea Peninsula, further explosions have hit Russian military facilities, including an ammunition warehouse near Dzhankoi, and an airbase in Hvardiiske. Russia’s defence ministry claims the Dzhankoi blast was the result of ‘sabotage’, while Ukraine has neither denied nor confirmed involvement in the explosions; however, officials in Kyiv have called for the destruction of a Russian-built bridge connecting the peninsula to mainland Russia, calling the construction ‘illegal’ – furthering speculation Ukraine aims to retake the annexed territory.

Meanwhile, in the north-eastern regions, Kharkiv and Sumy have continued to see frequent shelling. At least 17 people are alleged to have been killed in two separate Russian attacks on Kharkiv on Friday. Ukraine also claims to have repelled Russian advances on Pervomaiskyi, while a Russian attack on a residential area of the regional capital is said to have killed at least six people on Wednesday. Military officials in Kyiv have indicated they believe the majority of Russia’s fighting force to consist of volunteers on short-term contracts, with most of the original Russian fighting force thought to have been killed, wounded, or withdrawn.

UN Secretary-General Antonio Guterres and Turkish President Recep Tayyip Erdogan have met with the Ukrainian President in Lviv this week to discuss the security situation at the Zaporizhzhia nuclear power plant, as well as the progress of grain shipments under the recently brokered deal with Russia, which has enabled shipments to resume from Ukraine’s Black Sea ports. Guterres has repeated calls for the demilitarisation of the Zaporizhzhia plant, warning that potential damage to the facility would be ‘suicide’; however, Moscow has rejected the call.

Meanwhile, Finland has claimed that Russian MiG-31 fighter jets violated its airspace, triggering an investigation into the alleged aerial incursion. Estonia says it has repelled cyberattacks claimed by Russian hackers following the removal of Soviet-era monuments near the Russian border. The attacks came after Estonia forbade right of entry to Russian nationals with Estonian-issued visas, bar diplomatic, humanitarian, and transportation personnel. Latvia has named Russia a state sponsor of terrorism over its invasion of Ukraine, sparking international debate. Alexander Darchiev, director of the North America department of the Russian foreign ministry, stated that if the US government were to back a similar legislative proposal, it could trigger an unprecedented, complete rupture in diplomatic US-Russia relations – a development which would surpass even the diplomatic fallout of the Cold War.

The US has announced plans to send $800m of additional military aid to Ukraine. The news comes after countries attending the Copenhagen Ukraine 2022 conference collectively pledged $1.55bn in military aid to Kyiv, with Denmark contributing $112m. Further shipments of advanced weaponry to Ukraine from Western countries also come with the warning that Russia may respond by broadening the war in Ukraine. It’s unclear if this means beyond Ukraine’s borders.