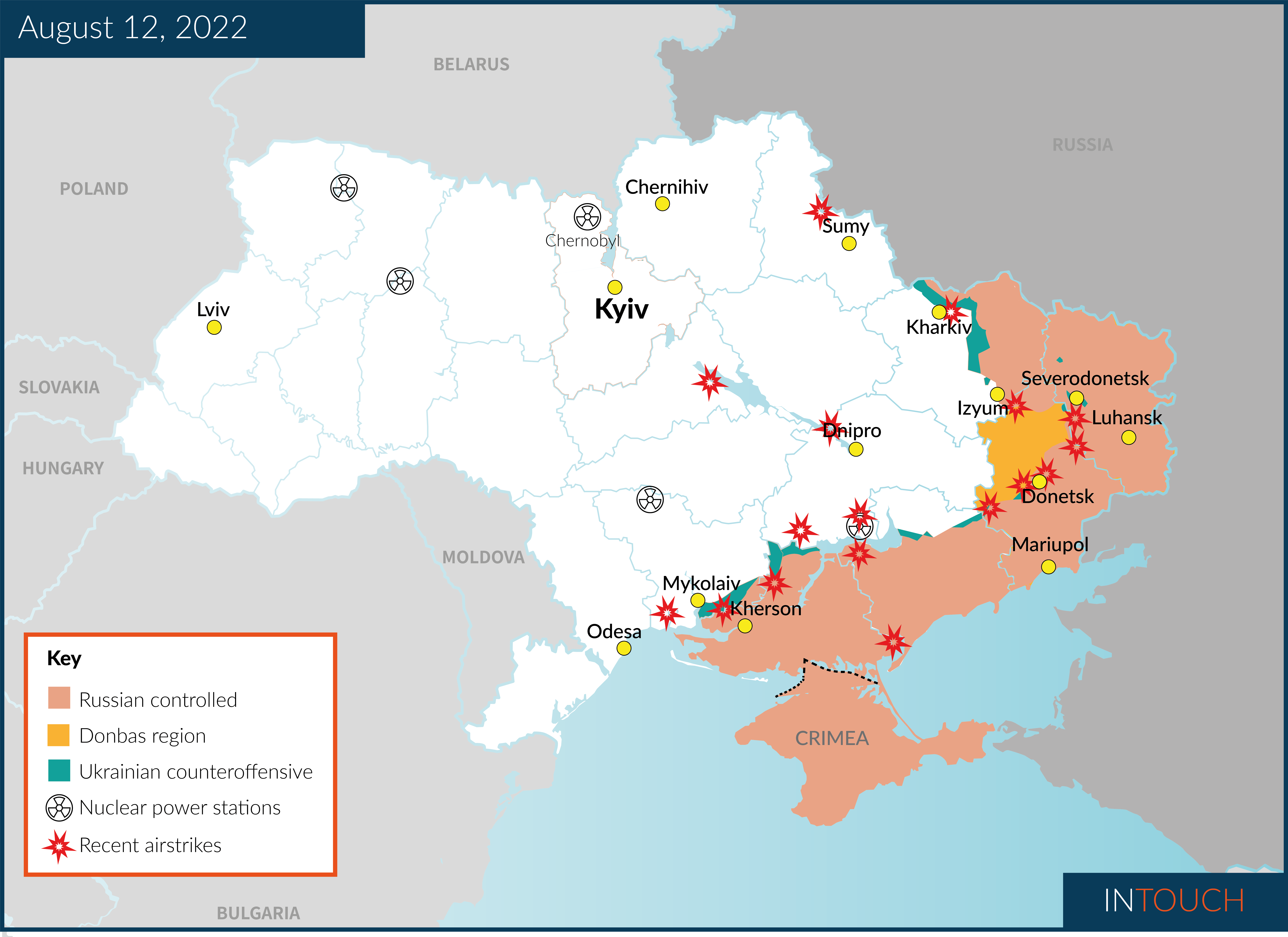 Major developments in Ukraine over the past week include fatal shelling near Europe’s largest operational nuclear site - located in Russian-occupied territory in Ukraine’s central Zaporizhzhia region - which has raised concerns over insecurity and allegations of misuse of the Enerhodar nuclear plant, and a deadly explosion at a Russian military airbase in the annexed Crimea Peninsula, which has drawn attention to the peninsula’s integral role in the origins of Russia’s war in Ukraine. In a statement delivered to press this week, Ukrainian President Volodymyr Zelenskyy called for the liberation of Crimea, in a move indicative of Ukraine’s bolstered determination to launch successful counteroffensives.

Intense fighting continues to be reported along the frontline in eastern Ukraine, with recent Russian claims purporting to have taken control of the town of Pisky. Ukrainian military sources have disputed the Russian claim, insisting the town remains in Ukrainian hands, but has confirmed reports of heavy clashes in the area, as Moscow presses on with its overarching military objective of seizing the entire Donbas region, consisting of Donetsk and Luhansk. Pisky is a heavily fortified town situated on the frontlines, just six miles north-west of the regional capital Donetsk city and is considered key to the defence of Donetsk.

Inland from the frontline, increasing attacks and shelling have been reported in more central regions, including Dnipropetrovsk and Zaporizhzhia. Petro Kotin - Ukraine’s head of state nuclear power firm, Energoatom - has expressed concern over the drastically heightened risk of the Zaporizhzhia nuclear power plant being shelled amid Russian occupation and increased reports of shelling in close proximity to the site. At least three lines connecting the plant to the Ukrainian power grid are understood to have been damaged amid recent shelling and Kotin has warned Russia may attempt to connect the facility to its own grid – a move which could further destabilise operational security at the site.

Ukraine claims that rockets fired by Russian troops from areas near the occupied plant are alleged to have killed 14 people and wounded 10 others on Wednesday. Meanwhile, Moscow claims that Russian anti-aircraft defence systems have thwarted Ukrainian attacks on the power plant, as well as on the nearby occupied city of Enerhodar. Both Russia and Ukraine have blamed each other for recent shelling, with Ukraine accusing Russia of turning the nuclear site into a military shield, having allegedly launched attacks from there, knowing Ukrainian forces are unlikely to retaliate for fear of striking a reactor and triggering a Chernobyl-like nuclear accident. The nuclear complex in Zaporizhzhia is Europe’s largest and has been under Russian occupation since early March.

Further south, the Russian-annexed region of Crimea has also seen a distinct increase in action, following a series of explosions which ripped through a Russian military airbase, leaving one civilian dead and 14 others injured. The blasts came a week after a makeshift drone carrying a small improvised explosive device struck Russia’s Crimea Black Sea fleet headquarters in Sevastapol, leaving six people injured in an unclaimed attack, which Russian-state media suggested Ukrainian fighters were responsible for. The latest blasts to hit Crimea occurred further north, at an airbase near Novofedorivka, where Russian sources claim the explosions were the result of ammunition detonating. Kyiv has denied responsibility; however, Ukraine’s air force has claimed that about a dozen Russian warplanes have been destroyed in the blasts. The airbase is understood to have been used by Russian forces to launch aerial attacks on targets deep inside Ukraine. Also in the south, the neighbouring Russian-occupied region of Kherson has continued to see intense Ukrainian counteroffensive efforts to recapture areas of land north-west of the regional capital. A recent Ukrainian military report indicates that a key bridge in an unspecified occupied part of Kherson has been rendered unusable after being struck by artillery amid a Ukrainian counteroffensive; however, Kyiv’s troops have struggled to make significant territorial advances, sparking fears Ukraine may struggle to retake Kherson before Russia annexes it, while others suspect both sides have reached a military deadlock in the region.

Kyiv has urged Western countries to ban Russian visitors in a move which has already received backing from Estonia, Latvia, and Finland. Calls for Russian visa restrictions are alleged to pose a more effective measure than the sanctions which have been imposed on Russia, which limit travel bans to Kremlin-affiliated officials and Russian airlines. Russia has warned that such a move would be interpreted badly in Moscow, risking retaliatory measures. Latvia has also made moves to designate Russia as a “state sponsor of terrorism”, prompting the Kremlin to condemn Latvia’s alleged “animalistic xenophobia” as a form of neo-Nazi ideology.

Western leaders have also come together in the form of the G7 group of nations, with foreign ministers from member states issuing a joint call for Russia to hand back control of the occupied nuclear power plant in Zaporizhzhia to Ukraine, calling Moscow’s presence at the site a danger to the wider region. While the plant is occupied by an estimated 500 Russian troops, it is still operated by Ukrainian technicians, and concerns for their welfare have also risen recently amid emerging reports of increased shelling in the immediate and surrounding area. In response to escalating international concern, Russia requested an urgent meeting of the UN Security Council (UNSC) in New York to discuss the situation at the power plant. Meanwhile, UN Secretary-General Antonio Guterres has called for an immediate end to all military activity near the Zaporizhzhia plant, calling on both Russian and Ukraine forces not to target its facilities or surroundings.