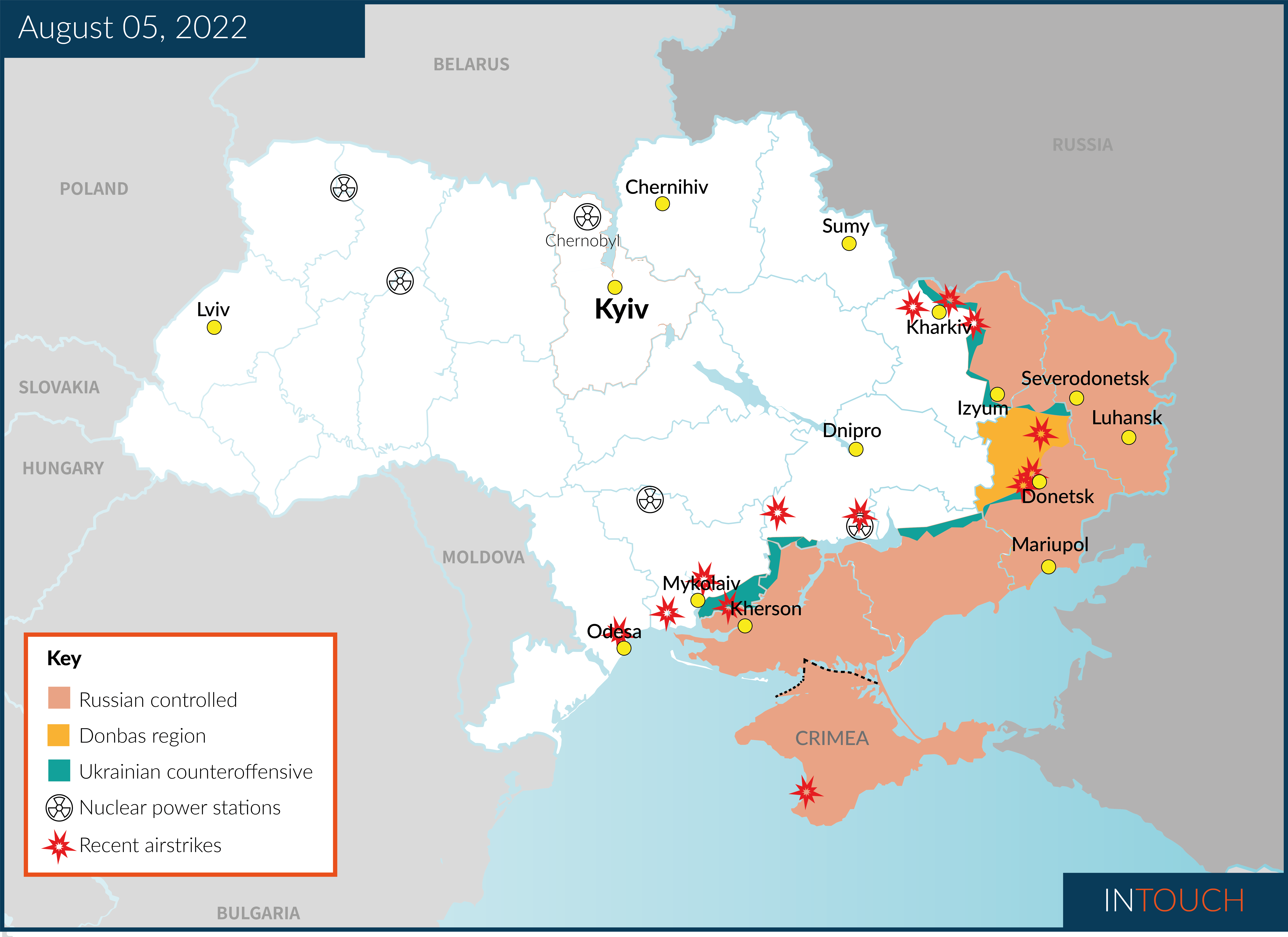 Russian and pro-Russian forces continue to pursue efforts to realise their main operational objective of taking control of the largely Russian-speaking Donbas region in eastern Ukraine, comprised of the Luhansk and Donetsk provinces. The last week has seen the frontline face increasing pressure in Donetsk, with both sides claiming to have captured more territory. A key grain export deal, brokered by Turkey and the UN, has seen the first few grain ships leave Ukrainian ports, signalling cause for optimism amid heightened concerns surrounding the impact of Russia’s war on Ukraine on an emerging global food crisis.

In eastern Ukraine, Russian forces have made small but calculated gains, including allegedly capturing the village of Pisky, on the outskirts of the regional capital city of Donetsk. Ukrainian forces have yet to confirm the capture of Pisky, although military officials did state on Thursday that Russian forces had mounted two assaults on the village – both of which were purportedly repelled. Ukrainian forces claim to have recaptured two villages near the eastern city of Sloviansk; however, Kyiv’s troops were apparently pushed back to the outskirts of the town of Avdiivka after being forced to abandon a coal mine which had been regarded as a key defensive position.

Meanwhile, in Zaporizhzhia, the security and safety of operations at a major nuclear power plant in the region is thought likely to have been significantly compromised by five months of Russian occupation. Moscow’s forces seized the plant earlier this year and recent intelligence released by the British Ministry of Defence suggests actions taken by the Russian forces – such as exploiting the protected status of the plant to rest forces in the wider area and avoid Ukrainian attacks - are likely to have undermined the safety of the plant’s normal operations. The intelligence update also indicated that Russia’s intentions with the plant still remain unclear, although Moscow’s troops are known to have based artillery units in adjacent areas to target Ukrainian positions on the western banks of the Dnieper River.

Russia is anticipated to launch an offensive in the southern Kherson region, as part of a suspected bid to gain momentum amid a stalled war. Moscow’s troops are believed to have been accumulating in strategic positions poised for reinforcements. This building up of forces in the region comes as Ukrainian troops have been launching various counteroffensives in parts of Kherson.

Over the past few days, much of the international attention surrounding developments in Ukraine has focused on the status of a fragile grain export deal brokered between Russia, Ukraine, Turkey, and the UN. The deal has seen the first grain ships leave Ukrainian ports via safe corridors established in the Black Sea, to be inspected in Istanbul. Three more ships carrying a collective 58,000 tonnes of grain departed from Chornomorsk port and Odesa port on Friday morning, heading for Turkey, Ireland, and the UK. The ships had been stranded in the Ukrainian ports since the start of Russia’s invasion.

Following on from the initial success of the grain export deal, Russian President Vladimir Putin has planned a meeting with Turkish President Recep Tayyip Erdogan in Sochi on Friday. The trip follows a three-way meeting between Putin, Erdogan, and Iranian President Ebrahim Raisi held in Tehran last month. The meetings are significant as Ankara aims to cement its good relations with Moscow, with regional and global developments on the agenda for the Sochi meeting. While Turkey is likely motivated by seeking to establish Russia’s position on Turkish troops presence in northern Syria, if, as a NATO member, Ankara holds substantial lobbying power with the Kremlin, this could stand to benefit Ukraine and the West in negotiations with Putin amid the war in Ukraine.

Also in the news this week, has been Ukrainian President Volodymyr Zelenskyy accusing Amnesty International of victim blaming. Zelenskyy has dismissed a report by the group suggesting that Ukrainian forces have endangered civilians by establishing bases in residential areas and hospitals and effectively making such areas targets for Russian strikes. The Ukrainian president accused Amnesty of abetting Moscow’s unprovoked attacks on Ukraine and allegedly seeking to offer amnesty to “the terrorist state” by shifting responsibility “from the aggressor to the victim”. Zelenskyy continued to state that under no circumstances could any Russian strike on Ukraine become justified, labelling Moscow’s aggression as “unprovoked, invasive, and terrorist”.