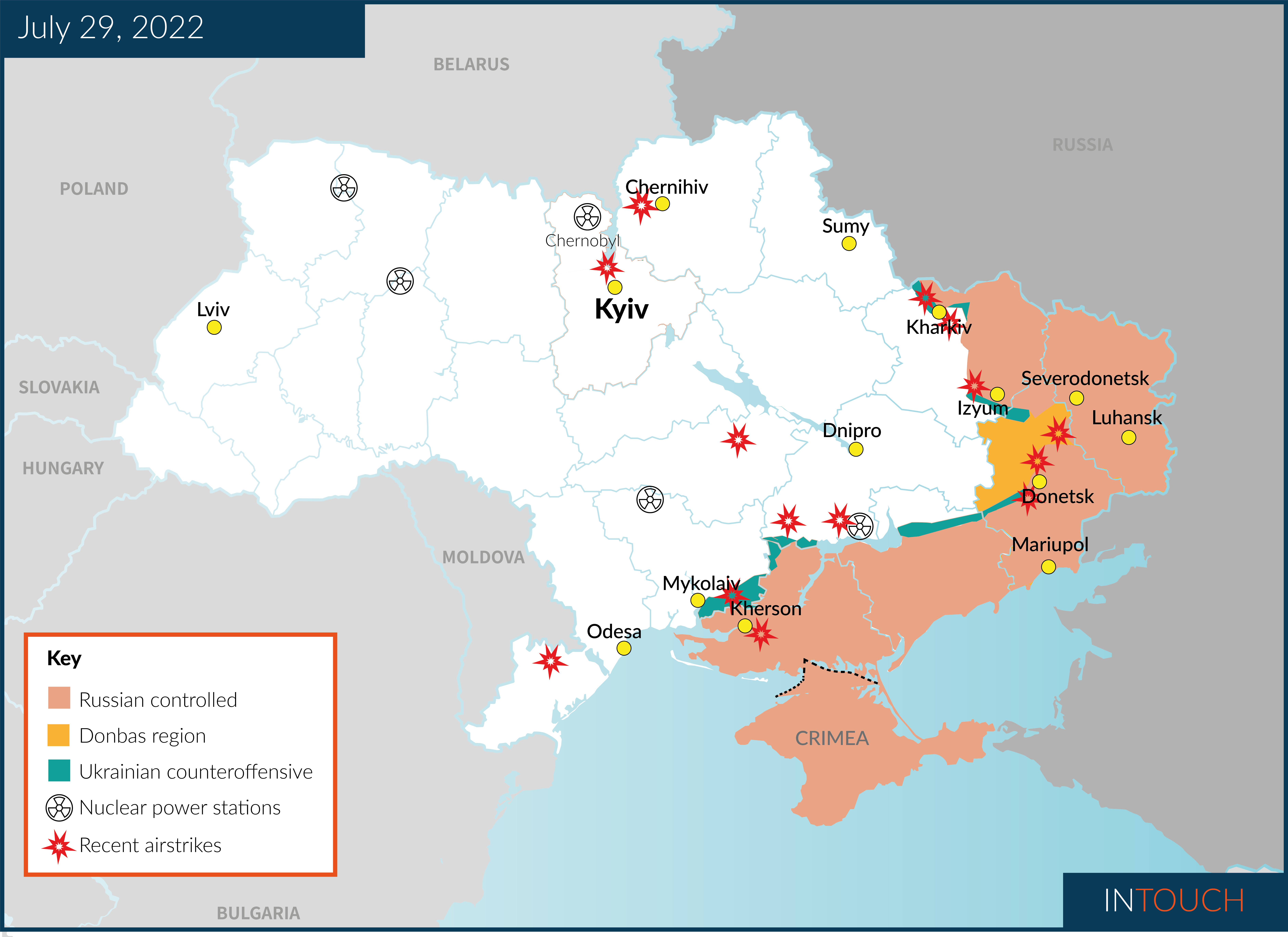 Moscow has been carrying out increasingly deadly strikes across wider parts of Ukraine, targeting parts of central and south-western regions in major attacks. In the central city of Kropyvnytsky, a Russian missile strike killed five people, while at least 15 casualties were reported following a missile strike on a Ukrainian military base north of Kyiv. The ramped up Russian strikes come as Kyiv has stepped up its efforts to retake the occupied southern Kherson region. Meanwhile, Moscow claims 40 Ukrainian prisoners of war have been killed in a Ukrainian strike on a prison in occupied Donetsk.

Among major strikes to be reported this week include that in Kropyvnytsky – which killed five and injured 26 when a flight school was targeted by two Russian missiles on Tuesday, as well as the strike on the Liutizh military base just north of Kyiv, which left at least 15 people injured. Six Russian Kalibr missiles were used in the Liutizh strike. Over 10 Russian missile strikes also hit the city of Chernihiv, in the north of the country. In the east, three deaths were reported, while another three people were also injured amid Russian shelling which hit 12 residential buildings in Bakhmut. Strikes have also increasingly targeted parts of the central Dnipropetrovsk region. Ukraine's northern and southern regions have also been targeted by deadly strikes within the last week.

The escalated Russian attacks come as Ukraine has been seeking to isolate Russian troops in the south of the country, as part of a wider bid to retake the occupied Kherson region. A Ukrainian strike hit a key bridge – the Antonivsky Bridge - used by the Russian forces in Kherson, taking the route out of action and thereby making it impossible for Russia to send reinforcements, weaponry, or further deployments via that land route. The move has effectively cut off the occupied regional capital city of Kherson from other occupied territories. Control over the Kherson region is considered critical for Russia, as it connects the annexed Crimea region to Russia’s forces in the east of Ukraine via a land corridor. Recent military intelligence suggests that Moscow is likely to redeploy forces from eastern Ukraine to defend the rest of the Kherson region, with reports already emerging of Russian troops attempting to build a replacement pontoon crossing near the destroyed Antonivsky Bridge.

Russian redeployment has also been reported in the Melitopol and Zaporizhia regions in response to a recently launched Ukrainian counteroffensive to retake the occupied areas. In occupied parts of the Donetsk region, Moscow and pro-Russian separatist officials have reported the deaths of at least 40 Ukrainian prisoners of war who were captured during the fighting for Mariupol following purported Ukrainian shelling in the town of Olenivka. It’s alleged that a Ukrainian strike hit a pre-trial detention centre in the town, which was being used to house captured Ukrainian soldiers. While unconfirmed reports claim 40 Ukrainian prisoners of war have been killed, a further 75 others have allegedly been wounded, along with at least seven prison staff. Ukraine’s military has denied carrying out the attack.

Meanwhile, Russian private military firm Wagner has apparently been allocated responsibility for some sections of the front line in eastern Ukraine. The employment of the firm marks the first known instance of Moscow using private military contractors for missions associated with overt, large-scale Russian military operations. The development has been reported by the British defence ministry, which indicated the deployment of Wagner forces was deemed unlikely to make a substantial difference to the trajectory of the Russian invasion of Ukraine – suggesting the move may be motivated by a need to fill gaps in Russia’s defence. The UK’s Defence Minister Ben Wallace has also released an assessment that the Russian army is thought to be failing in “many areas”, potentially prompting Moscow to rejig its invasion strategy once again.

Western allies have continued to stand by Ukraine and condemn Russia’s aggression, five months on from the launch of Moscow’s invasion of Ukraine. Acting through the Organisation for Security and Cooperation in Europe (OSCE), the US, Canada, and 36 European countries have confirmed aims to establish an expert mission to review allegations of a deteriorated human rights situation within Russia itself following reports of a major decline in freedoms since Russia launched the war in Ukraine. Moscow stands accused of increasingly suppressing dissenting voices, while the OSCE has also expressed concern over reports of torture in detention centres based in occupied Donetsk.

Evidence of this suppression can be seen in recent events from the past week, as a court in Moscow ordered Russian TV journalist Marina Ovsyannikova to pay a fine for allegedly discrediting the Russian army after she denounced Russia’s intervention in Ukraine during a live TV broadcast. Meanwhile, Russian officials in the Kremlin have begun to adopt an aloof approach to international relations, with Russian Foreign Minister Sergey Lavrov indicating he viewed a US request for a call between Lavrov and his US counterpart, Antony Blinken, as incredibly low priority. This approach is likely driven by a desire by Moscow to portray the West’s condemnation of Russian aggression as much ado about nothing. This type of narrative has been seen before in Russia and is typical of the Kremlin’s domestic propaganda campaign, which seeks to overtly influence Russian public opinion by manipulating the perspective of news reports covering external commentary on Russia’s war in Ukraine. In the last week, Kremlin spokesperson Dmitry Peskov denounced figures cited by the US on Russian military casualty figures in Ukraine as ‘fake’, based on the fact that they had been reported by Western media outlets – indicating the Kremlin views any news reported by Western media as intrinsically false.