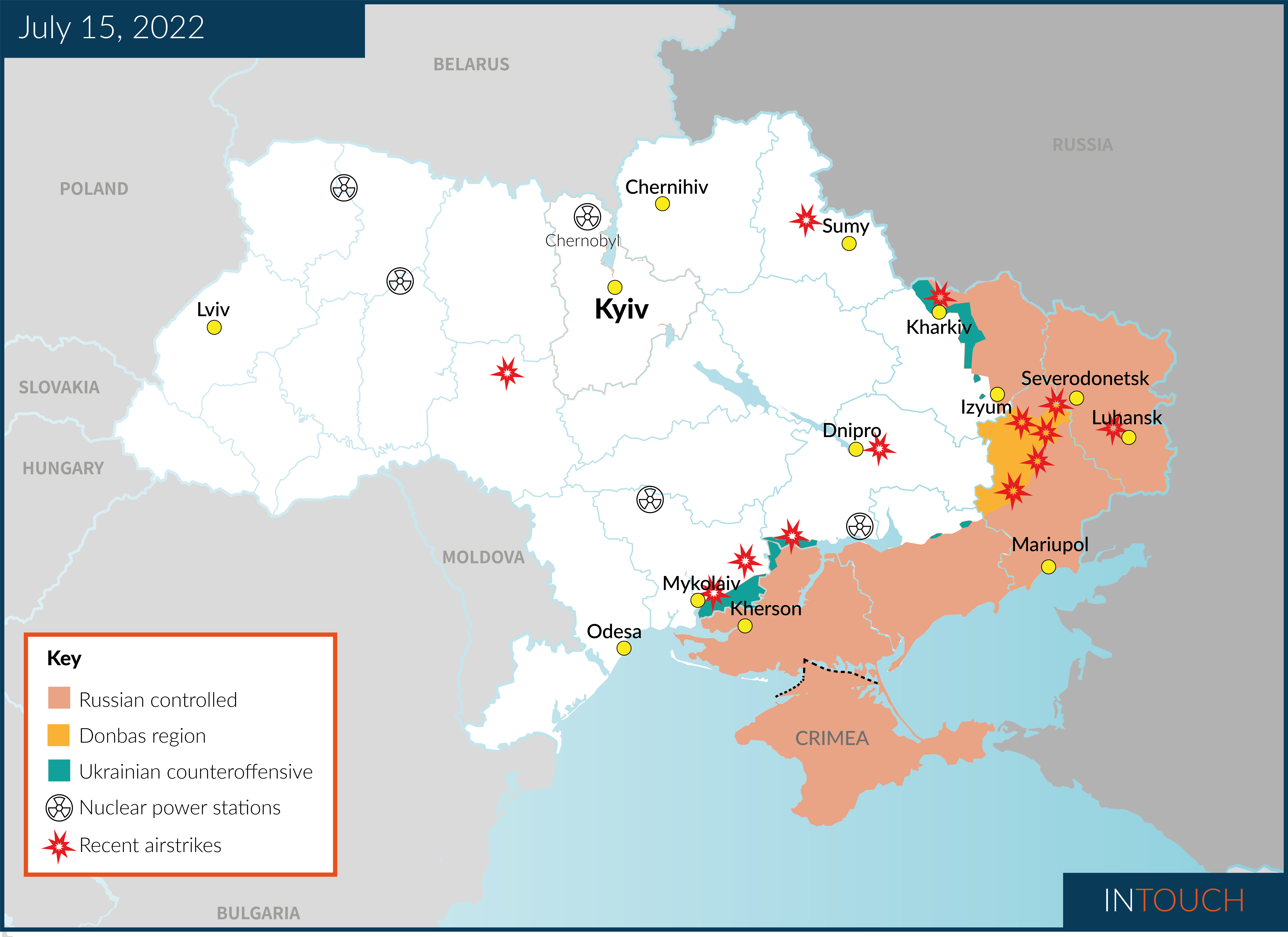 Developments in Ukraine over the past week have seen a major escalation in Russia’s offensive as Moscow continues to build up troops and equipment near the frontline in Donetsk and Luhansk. Russian missile strikes have been conducted with increased frequency and range, with cities far from the frontline coming under fire. At least 23 confirmed fatalities have been reported after three Russian missiles hit an office building in the central city of Vinnytsia. The strike has sparked international outcry, with Kyiv labelling it an “open act of terrorism”.

On the ground in Vinnytsia

The attack in Vinnytsia struck the car park of a nine-storey office block – the Jubilee building – located in the city centre shortly before 11:00 local time on Thursday 14 July. A number of residential buildings and a nearby concert venue were also affected in the strike, which has made headlines for targeting a city far from the eastern frontline in the Donbas region, where the majority of fighting between Ukrainian troops and Russian and Russian-backed separatist forces has been concentrated in recent weeks. Among the 23 people killed in the strike include three children, while over 100 others have also been wounded. Major damage has been sustained to buildings surrounding the impact site, and many cars have been destroyed by fire.

Vinnytsia is located some 200km south-west of Kyiv, shattering any fragile illusion of safety in areas which have typically seen little conflict so far. Throughout the course of the Russian invasion of Ukraine, central-western and western regions have experienced relative safety from deadly attacks in comparison to the southern, eastern, and northern border regions. Air raid sirens have been sounded in the city of Vinnytsia many times before, but until now had never been followed by an actual strike. It’s believed many residents had grown complacent and dismissive of the air raid, resulting in higher casualty figures. As firefighters continue to search the wreckage of the site, hopes of finding any more survivors have rapidly diminished.

Moscow has yet to comment on the strike but has continually denied targeting civilians in response to similar strikes, claiming instead Russian strikes are always aimed at military targets. The strike on Thursday used Russian Kalibr cruise missiles, which had been launched from a submarine in the Black Sea. The missiles’ journey would have covered a substantial distance, requiring increased accuracy to ensure missiles hit their target. The strike in Vinnytsia has highlighted the fact that Moscow can launch deadly attacks targeting anywhere in Ukraine at any time.

The attack on Vinnytsia came as EU foreign and justice ministers convened in the Netherlands, for a conference on alleged Russian war crimes in Ukraine. Forty-five countries met at the International Criminal Court (ICC) headquarters in The Hague to investigate suspected war crimes by Russian forces in Ukraine, resulting in leaders pledging to coordinate international efforts to bring Russia’s military to justice. Some 23,000 alleged war crimes are set to be investigated, with credible evidence to be collected and organised by investigative teams in Ukraine.

The international reaction to the strike in Vinnytsia has been almost uniformly one of outrage. The EU has called the attack an atrocity, stating that civilians continued to pay the ultimate price the war, "due to Russia's fundamental disregard of international humanitarian law". Kyiv officials have accused Moscow of committing another war crime in Vinnytsia, with Zelenksyy claiming that by carrying out such an attack amid the conference on Russian war crimes, Russia has “shown its attitude to international law, to Europe, and to the entire civilised world”.

In other developments, it was confirmed on Friday that British man, Paul Urey, who was detained by Russian-backed forces whilst fighting in eastern Ukraine and faced the death penalty, has died in detention. Urey was detained in the self-proclaimed Donetsk People’s Republic (DPR) alongside another British national in April and had been accused of being a mercenary, meaning he would face trial without the protections granted to prisoners of war as per the Geneva Convention - arguably violating international law. His death in detention raises questions over his treatment and whether or not he was tortured by his captors. News of Urey’s death comes as reports emerge of hundreds of Ukrainian civilians and politicians allegedly being forcibly detained and facing torture. Over 270 cases of forced detentions have been verified, with many of those seized being subjected to torture, including Ukrainian politician Oleh Pylypenko, who claims he was waterboarded, electrocuted, frozen, and beaten up after being seized by Russian paratroopers near Kherson in March.

Meanwhile, talks aimed at resuming Ukrainian grain exports blocked by Russia in the Black Sea have seen success in reaching a provisional deal. Turkish defence minister Hulusi Akar stated that an agreement to ensure the safety of shipping routes for grain ships had been reached, with a deal to be signed next week. The deal would end a standoff over grain exports from Ukraine, which accounts for a major proportion of global grain supply, threatening a worldwide food crisis. While the deal marks critical progress, observers remain cautiously optimistic, as Russia has proven to have a sketchy track record in upholding its end of promises made amid the war so far – particularly when it comes to ensuring the safety of supposed conflict-free corridors, whether they be for transporting goods or evacuees.