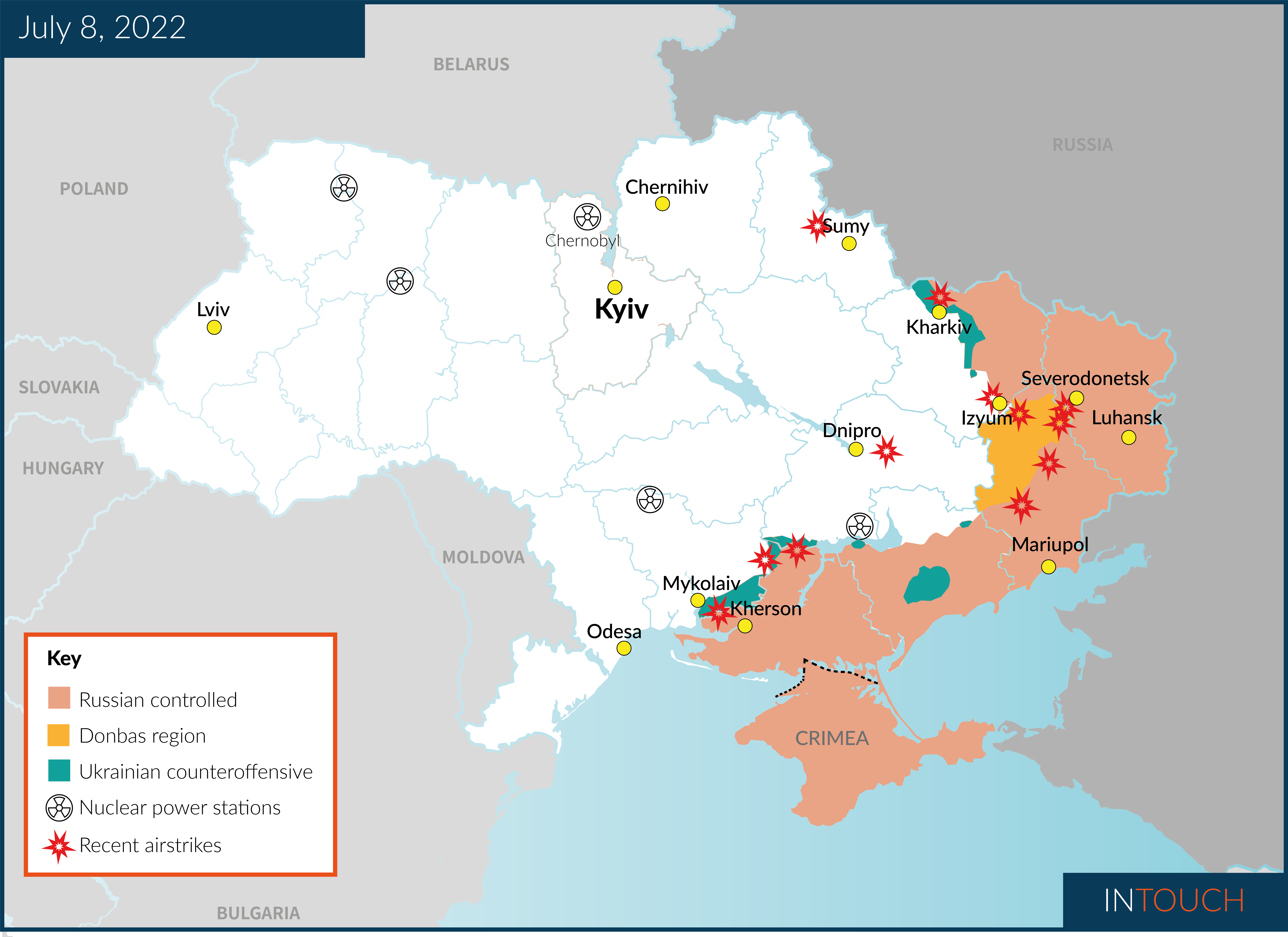 Russia’s recent capture of Lysychansk has seen Moscow’s forces take a firmer hold of the Luhansk region, and throughout the past week, the main focus of the Russian military objective in the eastern Donbas region has shifted towards Sloviansk, and its twin city of Kramatorsk, in Donetsk. Moscow has warned Kyiv and its Western allies that Russian troops have yet to launch their full military campaign in Ukraine with all their strength – a message to which Ukrainian President Volodymyr Zelenskyy responded with defiance in his nightly address on Thursday, warning the Kremlin that Ukraine would not be broken.

The Russian offensive in eastern Ukraine has pivoted towards the south-eastern Donetsk region, where Moscow hopes to seize what remains of the Donbas region, which is claimed by Russian-backed separatists. Kyiv indicated earlier in the week, that Ukrainian troops had little alternative but to focus on defending against and repelling Russian advances as the battle moves from Luhansk to Donetsk. Ukrainian forces which retreated from the now captured city of Lysychansk are understood to be holding positions between Sloviansk and Makhmut. Residents in Sloviansk were urged to evacuate, or go to shelters, ahead of major Russian shelling anticipated to hit the area. A central market which was hit in the city on Tuesday caused a large fire to break out and resulted in the deaths of at least two people. Dozens of residential areas in the city have already come under fire, as have areas near Kramatorsk – the administrative capital of the Donetsk region. An airstrike on Kramatorsk reportedly left one person dead and several others injured on Thursday.

Despite both Sloviansk and Kramatorsk coming under increasingly heavy bombardment, the UK Ministry of Defence has released a recent intelligence report suggesting Moscow’s more immediate tactical objective amid fighting in Ukraine’s eastern region may be to capture the town of Siversk, before taking the twin cities of Sloviansk and Kramatorsk. It’s also been speculated that Russia may be temporarily easing its offensive in eastern Ukraine to reassemble forces and re-supply troops – much like it did after withdrawing from northern Ukraine to re-convene for the major offensives in Luhansk and Mariupol. According to recent analysis by the Institute for the Study of War, Russian forces made no claimed or assessed territorial gains in Ukraine for the first time in 133 days on Wednesday, leading observers to suspect an ‘operational pause’. On Thursday, the Kremlin appeared to confirm that some combat units had been granted a rest period amid Russia’s so-called ‘special military operation’ in Ukraine.

Meanwhile, Ukrainian counter-offensives in the south of the country reportedly aim to target thinly spread Russian forces. Air raid sirens were heard across most of Ukraine on Tuesday night amid escalated Russian attacks, which targeted multiple areas including the Khmelnytskyi region in western Ukraine, the central Dnipropetrovsk region, the north-eastern border region of Sumy, and the Black Sea port of Mykolaiv in the south. On Thursday, Russian missiles also struck Snake Island (aka Zmiinyi Island) – an island from which Moscow withdrew its forces last week as an apparent ‘gesture of goodwill’ amid an escalating dispute over Russia’s alleged blocking of grain exports leaving Ukrainian ports. Also in the Black Sea, a drifting, crewless Moldovan-flagged oil tanker was hit in another Russian missile strike in the Black Sea. Kyiv has blamed the fact that the drifting vessel represents a so-called ‘ecological bomb’ threat on the Russian blockade of Ukrainian ports.

The north-eastern regions of Kharkiv and Sumy have also come under increased fire in recent weeks as Russian troops seek to advance on territory near the Russian border. Frequent attacks have been reported on a daily basis throughout both regions, including in the populated areas of Chuhuiv, Izyum, and Bohodukhiv.

The last week has seen yet another flurry of diplomatic events take place, with the war in Ukraine topping the agenda of the G20 summit being held in Indonesia. The two-day joint summit of G20 foreign ministers got underway on Thursday, with Russia’s Foreign Minister Sergey Lavrov in attendance. Lavrov accused the West of levying “frenzied” criticisms at Moscow over the Russian invasion of Ukraine. Meanwhile, Brazilian President Jair Bolsonaro has criticised the Western economic sanctions on Russia as ineffective. Russia’s blockade of grain exports from Ukraine has positioned Moscow in an important negotiating role, with Russia said to be ready to discuss a potential deal with Turkey on Ukraine grain. UN Secretary-General Antonio Guterres has re-iterated the critical impact of the situation in Ukraine on the global economy, while European Commission President Ursula von der Leyen has also called for Russia’s Black Sea blockade to come to an end.