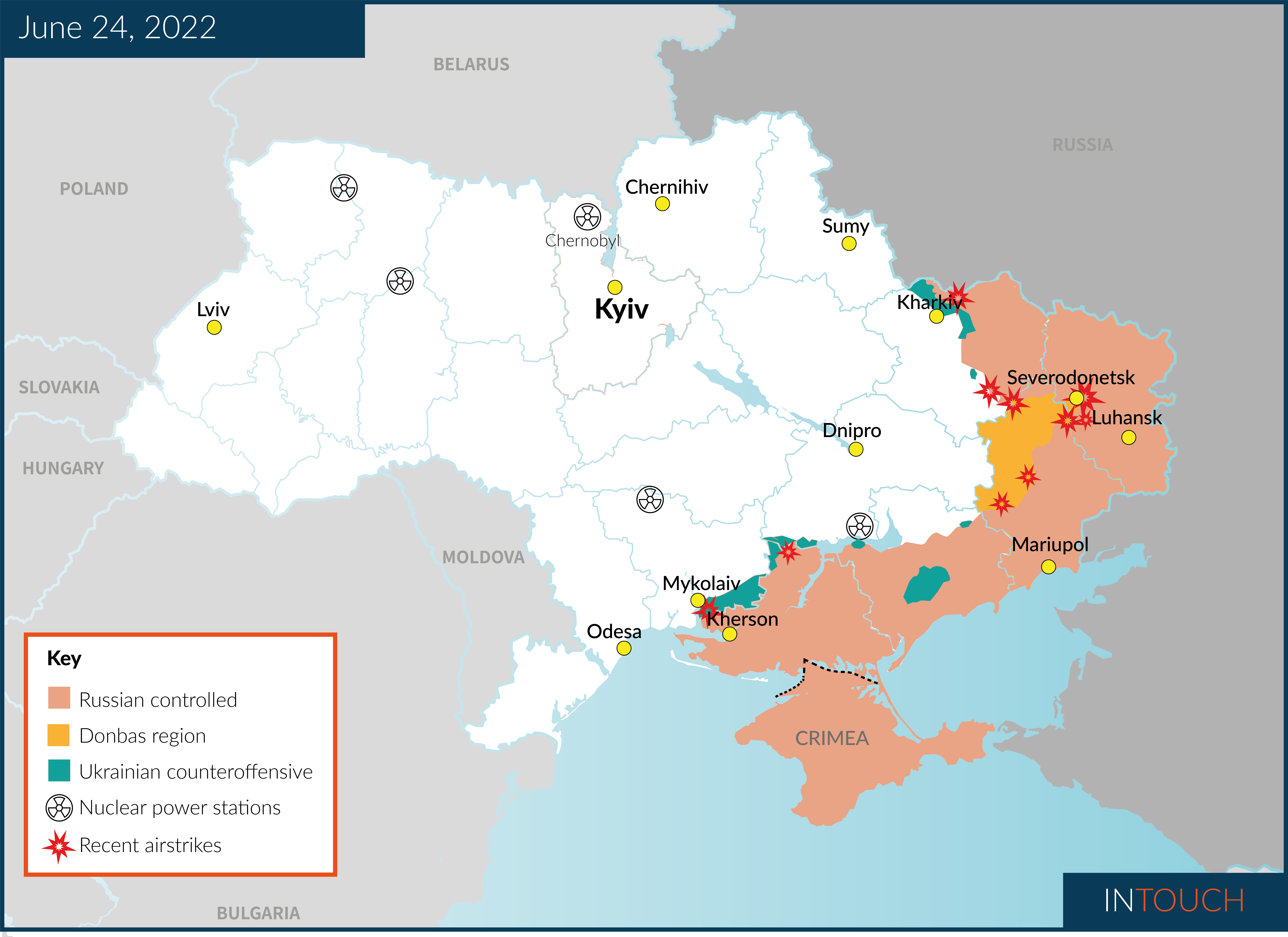 The Russian invasion of Ukraine has escalated in recent weeks, with the focus of the main Russian offensive now predominantly on the ongoing battle for the twin cities of Severodonetsk and Lysychansk in the eastern Luhansk region. As Ukrainian forces retreat from Severodonetsk, the fate of Lysychansk has become more and more dependent on artillery strength, as Russian forces capture more towns south of the city, threatening to encircle it. Ukrainian President Volodymyr Zelenskyy has again re-iterated urgent appeals for high-artillery weapons and ammunition to be sent to Ukraine by Western allies. On Thursday, Zelenskyy hailed a decision by the EU to make a historic offer of candidacy status to Ukraine and neighbouring Moldova.

The offer of candidacy is significant to the war in Ukraine for several reasons; however, the most pertinent is the message it sends to Russia. Ukraine applied for EU candidate status in the immediate days after Russia launched its invasion of Ukraine in February. It can still take years for the membership process to complete – meaning Ukraine is still a way off securing all the benefits and assurances associated with membership, which could make a real and substantial difference in the war. Candidacy is only the first official step and holds no guarantee of success. What is significant in terms of the process at this stage, is the rapid speed with which the initial candidacy applications have progressed. Although being granted candidacy status holds no immediate tangible benefits, it sends a strong message of Western unity to Moscow.

Brussels’ backing of Ukraine will come as no surprise to Russian President Vladimir Putin, with the Kremlin already attempting to downplay Ukraine’s status as an EU candidate. Putin claimed to have nothing against Ukraine joining the EU, saying it was their “sovereign decision to join economic unions or not”. The statement has failed to land as sincere however, considering Moscow has repeatedly insinuated it doesn’t view Ukraine as a sovereign nation in its own right. Furthermore, while initially founded on the principles of economic unity as the European Economic Community (EEC) in the 1950s, the EU has long moved on from its EEC days and has since evolved into a major political and economic union. By describing it as purely an ‘economic union’, Putin undermines the extent of political influence the bloc holds on the continent and thus downplays the wider political significance of Brussels backing Ukraine and challenging Putin’s vision of a ‘new world order’.

Putin is also likely aware that Ukraine’s candidacy means little in the short-term, as the road from candidate status to membership is a long one, riddled with hurdles – such as qualifying criteria which Ukraine may struggle to meet, given its current need to prioritise efforts on resisting the Russian invasion. The accession process to the EU is merit-based and the president of the European Commission Ursula von der Leyen has made it clear that Ukraine’s process has to be as ‘by the book’ as any other candidate country’s accession would be, despite the unusual set of circumstances posed by the ongoing war. This means that formal negotiations cannot begin until conditional reforms are carried out, including fighting corruption and bolstering the rule of law. "Ukraine will do everything necessary, fulfil all the conditions and pass the necessary laws. Because otherwise our state has no future. Indeed, our best defenders are dying for it”, said the Mayor of Kyiv Vitali Klitschko. Currently, the European Commission is set to review Ukraine’s progress on this front by the end of the year.

Zelenskyy has been keen to voice his desire for Ukraine to be granted EU candidacy status, mentioning Ukraine’s application frequently in his speeches. By starting down the path to EU membership, Zelenskyy hopes to permanently steer Ukraine away from the Russian sphere of influence in eastern Europe – a route, he says, which is Ukraine’s only hope for a future. Ukraine has already been described as being “part of the European family” by von der Leyen, who also stated that the decision to grant candidacy to Ukraine strengthened the EU as a whole in the face of “Russian imperialism”. Lithuanian President Gitanas Nauseda stated that the EU’s political for Ukraine represented “the least we can provide for them” amid the war.

Ukraine’s potential accession to the EU is also significant for historical reasons – ones which pertain to the origins of Russia’s involvement in Ukraine’s southern and eastern regions. Russia has led the current invasion of Ukraine off the back of supporting separatist groups in Donbas, which have been fighting Ukrainian troops in the Donetsk and Luhansk regions since the separatist uprisings which emerged following the annexation of Crimea in 2014. These events are seen in Ukraine as having ignited the country’s path to war with Russia and were in turn triggered by the pro-EU protests which ousted the Russian-backed Ukrainian ex-President Viktor Yanukovych from power in February 2014. Russian interference in Ukraine is irrevocably and intrinsically linked to Moscow’s goal to retain influence in the country despite Ukraine’s aspirations to join the EU and NATO. For the best part of the last decade, Ukraine has been in the precarious position of teetering on the brink of becoming more closely affiliating with either the West or with Russia, and Putin has a clear track record of seeking to disrupt Ukraine’s goals to align itself with Brussels, by attempting to forcibly tip Kyiv into the clutches of the Kremlin.