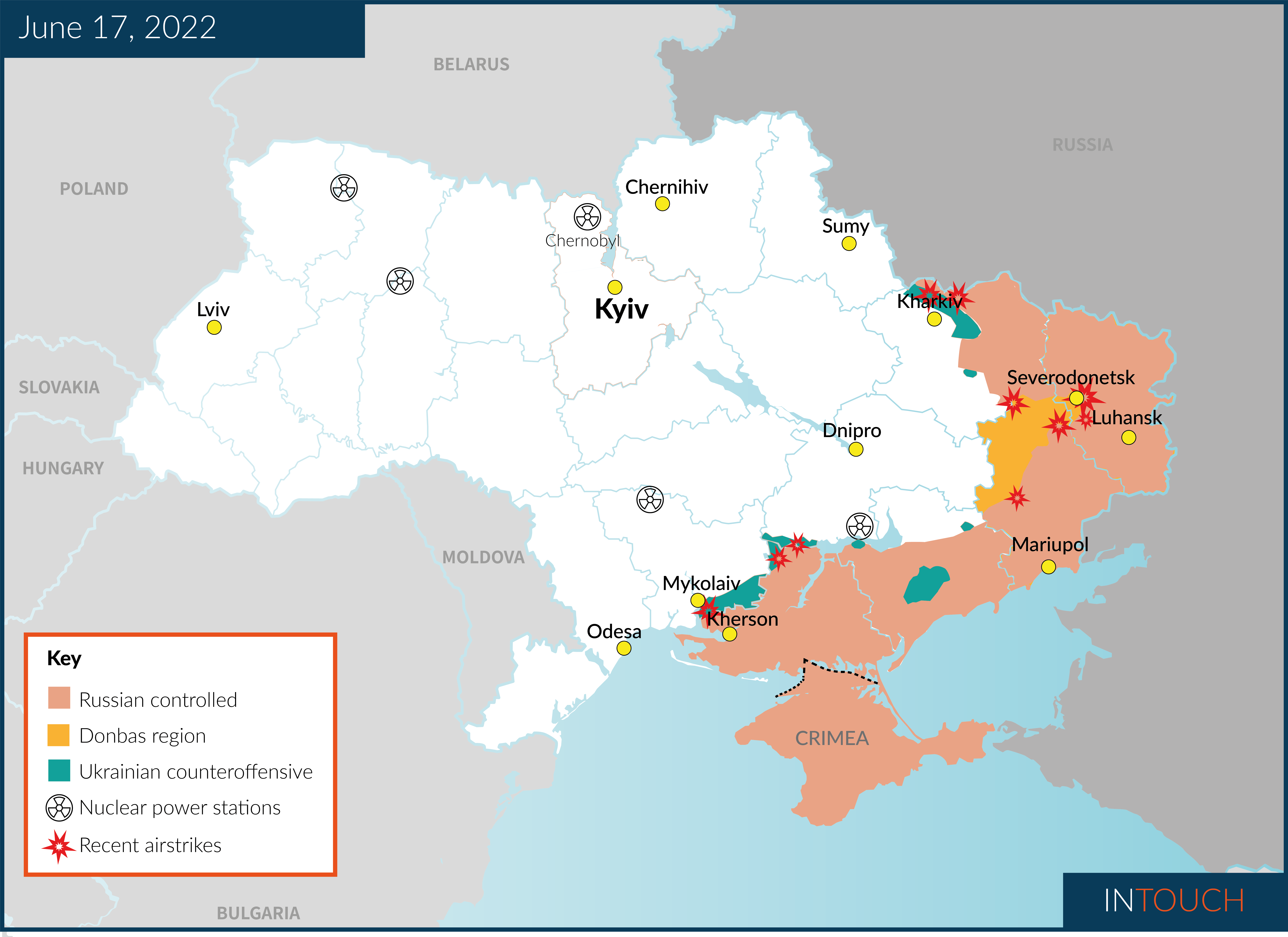 Russian forces have continued to bear down on the eastern city of Severodonetsk in Luhansk over the past week. The war in eastern Ukraine has evolved following the fall of Mariupol in the south, leading to Russian forces refortifying in the northern parts of the Donbas region, where they have since geared up to take large swathes of territory around Severodonetsk. Located along the eastern banks of the Siverskyi Donets River, opposite its western twin – Lysychansk - the city of Severodonetsk has now become the pivotal in the fate of the rest of the region, as both sides battle for control. The last of a handful of key access bridges connecting Severodonetsk to the rest of Ukraine was destroyed amid fighting this week, isolating the Ukrainian fighters in the city, and potentially tipping the scales in Moscow’s favour.

Evacuation efforts to extract hundreds of sheltering civilians from the Azot chemical plant in the city have sparked fears of a repeat situation of Mariupol. So far, only one humanitarian corridor has been successful, which was opened by the Russian forces on Wednesday, allowing several hundred Ukrainian civilians a safe route to separatist-held territory. Ukrainian fighters in the plant were also urged to lay down their arms and surrender; however, the ultimatum was ignored by Ukrainian soldiers. While the corridor enabled some to escape the immediate danger of intense fighting in the city, it’s feared that by transporting the evacuated civilians to Russian-held areas, they may not be allowed to move out of them. Such concerns have been furthered by Russian state media reports claiming the civilians were being held in the plant by Ukrainian forces, to be used as “human shields”.

Russian-backed separatists in Luhansk have said they, together with the Russian Federation, are prepared to discuss opening further humanitarian corridors from the plant if Ukraine agrees to a ceasefire. Separatist leaders in Luhansk have alleged that Wednesday’s humanitarian corridor was disrupted by shelling from Ukrainian “militants”. On Friday, the Luhansk regional governor indicated that plans to evacuate a further 568 civilians (including 38 children) sheltering in the bunkers underneath the plant were "impossible" given the current state of clashes, with ongoing shelling and heavy fighting reported throughout the area.

The United Nations (UN) has warned that thousands of civilians are still thought to be trapped in the city, as essential supplies begin to run out. With the destruction of the last bridge leading out of the city amid fighting earlier this week, the remaining 12,000 residents have effectively been trapped inside the city. The UN’s Humanitarian Affairs office stated that a widespread lack of water and sanitation is a major cause for concern, while food supplies and health provisions are also rapidly depleting. The destroyed bridges and continued fighting have made UN efforts to safely deliver aid to the city’s residents impossible.

Capturing the city has been a top military goal for Moscow for several weeks and the Russian army has ramped up offences as it nears taking control of almost all of the city. Taking Severodonetsk would give Moscow control of almost the entire Luhansk region – much of which is now held by Russian-backed separatists. As of Friday 17 June, Ukrainian forces are understood to still be in control of Severodonetsk’s eastern district, with defensive efforts aiming to push Russian forces back towards the city centre, describing the operation as one of a series of “partial success and tactical retreat”. Ukraine’s rapid loss of territory in the area is largely thought to be down to Russian troops being backed by vast weapons and artillery supplies, allowing them to bombard Ukrainian positions around the clock.

As the situation in Severodonetsk continues to worsen, Ukrainian President Volodymyr Zelenskyy has warned European leaders that Moscow’s invasion of Ukraine amounted to aggression towards all of Europe as he urged the West to send more weapons and ammunition. Zelenskyy stated weapons received by the West are a major factor in improving Ukraine’s chance of survival, saying Ukraine’s artillery limitations could not hold against the massive firepower of the Russian forces. “There is a direct correlation: the more powerful weapons we receive, the faster we can liberate our people, our land”, said Zelenskyy on Friday. His appeal comes amid rising concern in Kyiv that Western support has faltered in recent weeks as the economic impacts of the war take a toll on global growth. The situation in Severodonetsk proves Russia’s invasion of Ukraine shows no signs of abating as the seemingly open-ended war rages into its 17th week, prompting Zelenskyy to make a concerted effort to double-down on emphasising the decisive and critical importance of the West’s support in the hope that Western interest in the war doesn’t ebb just as an outgunned and fatigued Ukrainian defence begins to falter.