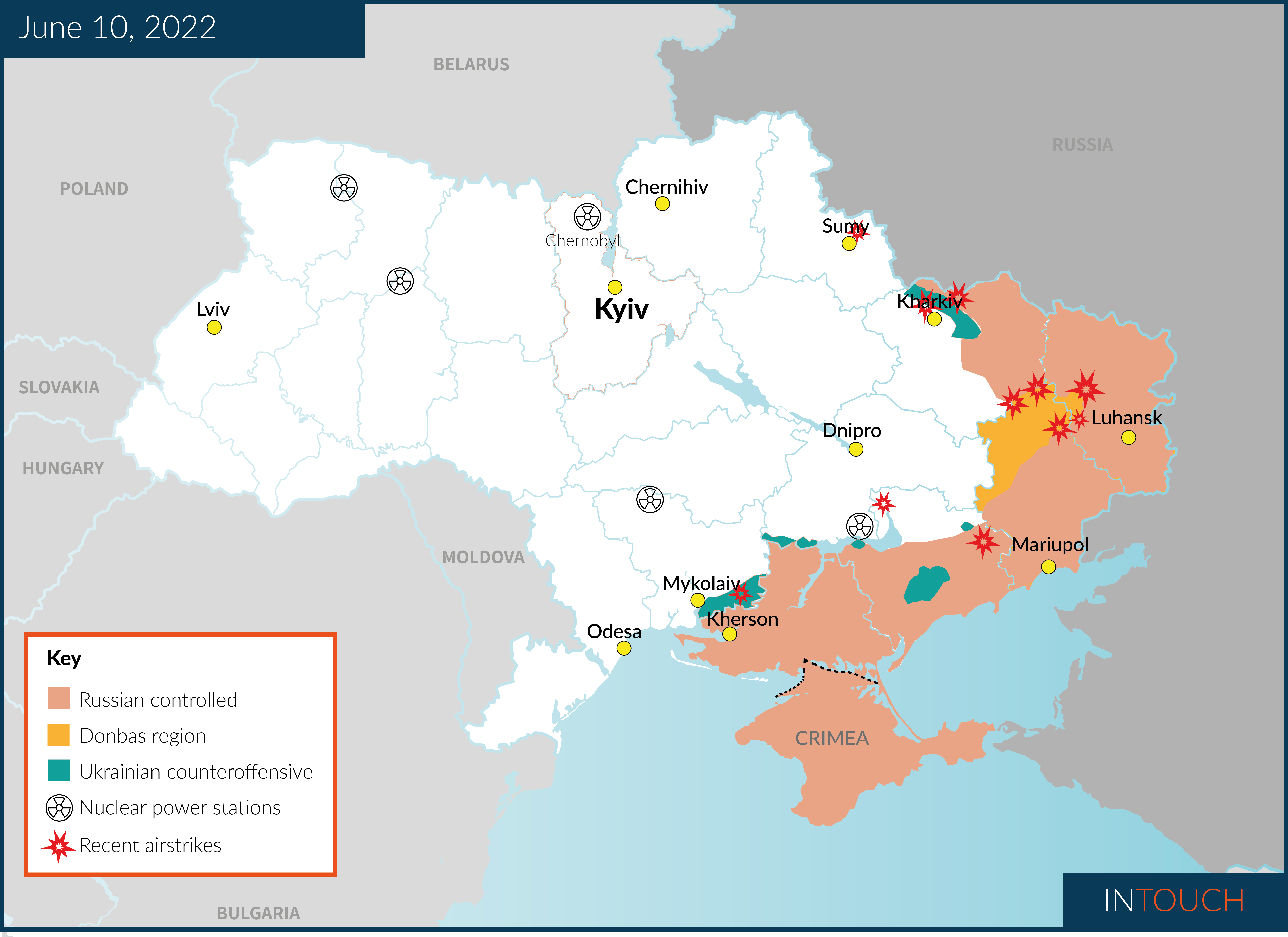 This week, the eastern city of Severodonetsk, and its twin city of Lysychansk in the Luhansk region have been at the forefront of the battle between the Ukrainian forces and the Russian forces fighting in Donbas. Ukrainian President Volodymyr Zelenskyy has described the intense fighting there as decisive for the rest of the contested region, where Russian forces and Russian-backed separatists have taken swathes of territory in recent months. In other developments, two British nationals and a Moroccan national who fought alongside Ukrainian forces and were captured by Moscow have recently been handed death sentences by a Russian proxy court, sparking international controversy – quelling fears of the West losing interest in the conflict as the war drags on, entering its fourth month.

Officials in Kyiv have recently expressed concerns that “war fatigue” could work against Ukrainian interests, by eroding the West’s resolve to help Ukraine defend itself against Russian aggression. Earlier this week, Zelenskyy stated that as fatigue grows, international pressure for Kyiv to concede territory to end the war has mounted, implying European nations have begun to favour outcomes more beneficial for the stability of the continent than that of Ukraine. Some observers have speculated that Moscow has deliberately drawn out the war in the hope of wearing down the West on the assumption that Western leaders will gradually shift towards a policy of appeasement. Recent cost-analysis of the war by think-tank Penta estimated that every month of fighting costs Ukraine around $5bn – making Kyiv immensely dependent on the consolidated position of the West. The concerns are peaking alongside oil prices throughout Europe, as European leaders worry that an EU embargo on Russian gas imports will have detrimental effects on bloc members' economies. However, Moscow’s move to prosecute foreign fighters by handing down death sentences this week has further hardened the resolve of affected countries to push against Russian occupation, as the UK seeks to prevent two of its citizens from being executed.

There has been a notable increase in fighting in parts of north-eastern Ukraine – mostly in and around the Kharkiv and Sumy regions, particularly areas near the Russian border. Russian forces have continued to hold their defensive lines north of Kharkiv city and have been conducting regular artillery and rocket attacks on surrounding settlements. It’s claimed that the Ukrainian forces have had some success in gradually advancing in Kharkiv.

Luhansk governor  Serhiy Haidai has indicated that Moscow’s forces are largely in control of Severodonetsk – a strategically important city connecting the eastern Donbas region to the north-eastern Kharkiv and Sumy regions via Izyum. However, Ukrainian military officials have claimed the Ukrainian army continues to frustrate Russian attempts to take the fiercely contested city thus far, while the president has confirmed that Ukrainian troops came under sustained attack again in the city on Friday. Elsewhere in the east, the Ukrainian army are said to have made some gains amid fighting in the south-eastern Zaporizhzhia region.

Meanwhile, the occupied breakaway eastern Ukrainian region of Donetsk has said it will soon aim to start shipping grain to Russia, according to Russian state media sources. Russian analysts have also suggested that the West has been exaggerating the issue of grain exports, claiming recent drops in production and export levels should be attributed to seasonal variation instead of the impact of Russia’s invasion. The remarks come as Kyiv re-iterates warnings that the fall in Ukrainian exports could contribute towards a global food crisis.

Also in Donetsk, the sentencing of three foreign citizens to death by a proxy court on behalf of Moscow has triggered a flurry of diplomatic action. The UK’s Foreign Secretary, Liz Truss, has opened talks with her Ukrainian counterpart in a bid to further negotiations. Both the UK and Ukraine have condemned the sentencing as a violation of the Geneva Convention. The three foreign nationals were tried by the proxy court as mercenaries instead of prisoners of war for fighting alongside Ukrainian forces. Kyiv has said the death sentences should be considered null and void.

The captured city of Mariupol is said to be at major risk of a cholera outbreak amid reports of water and medicine supply shortages. Russian forces are believed to be struggling to provide basic services to residents in the occupied city. The city’s exiled mayor has warned that an estimated 100,000 Ukrainian citizens are understood to still be trapped in the city, with no feasible means of leaving without outside intervention.

Along the coast, in the occupied region of Kherson, Western diplomats have highlighted concerns surrounding reports that Moscow seeks to annex the region, which is situated next to the annexed Crimea region. It’s also been claimed that Russian proxy authorities in Kherson have been abusing the rights of civilians, as well as suppressing the activities of local politicians.

The southern city of Mykolaiv has yet to fall, despite continued Russian efforts to take the city, which lies in a strategically key position between the southern region of Kherson and the south-western Odessa region. Recent reports suggest Russian attacks in the area have been targeting grain exports from port terminals. The Ukrainian forces are said to be holding defence lines in the region.

The western city of Lviv recently held a memorial in Rynok Square for some 243 children who reportedly died amid the war. The school buses memorial was titled “excursion that will never happen”, featuring empty vehicles with stuffed toys strapped into seats to represent each lost child. Amid the memorial, Zelenskyy also acknowledged International Children’s Day during a nightly video address to the nation, claiming as many as 200,000 children have been forcibly taken to Russia. The streets in Lviv have seen signs saying “Caution! Children!” erected in protest against the alleged violation of children’s right during the war. The memorial has come as authorities in Lviv continue to focus efforts on aiding refugees, with a new initiative aiming to integrate refugee housing needs with sustainability goals.