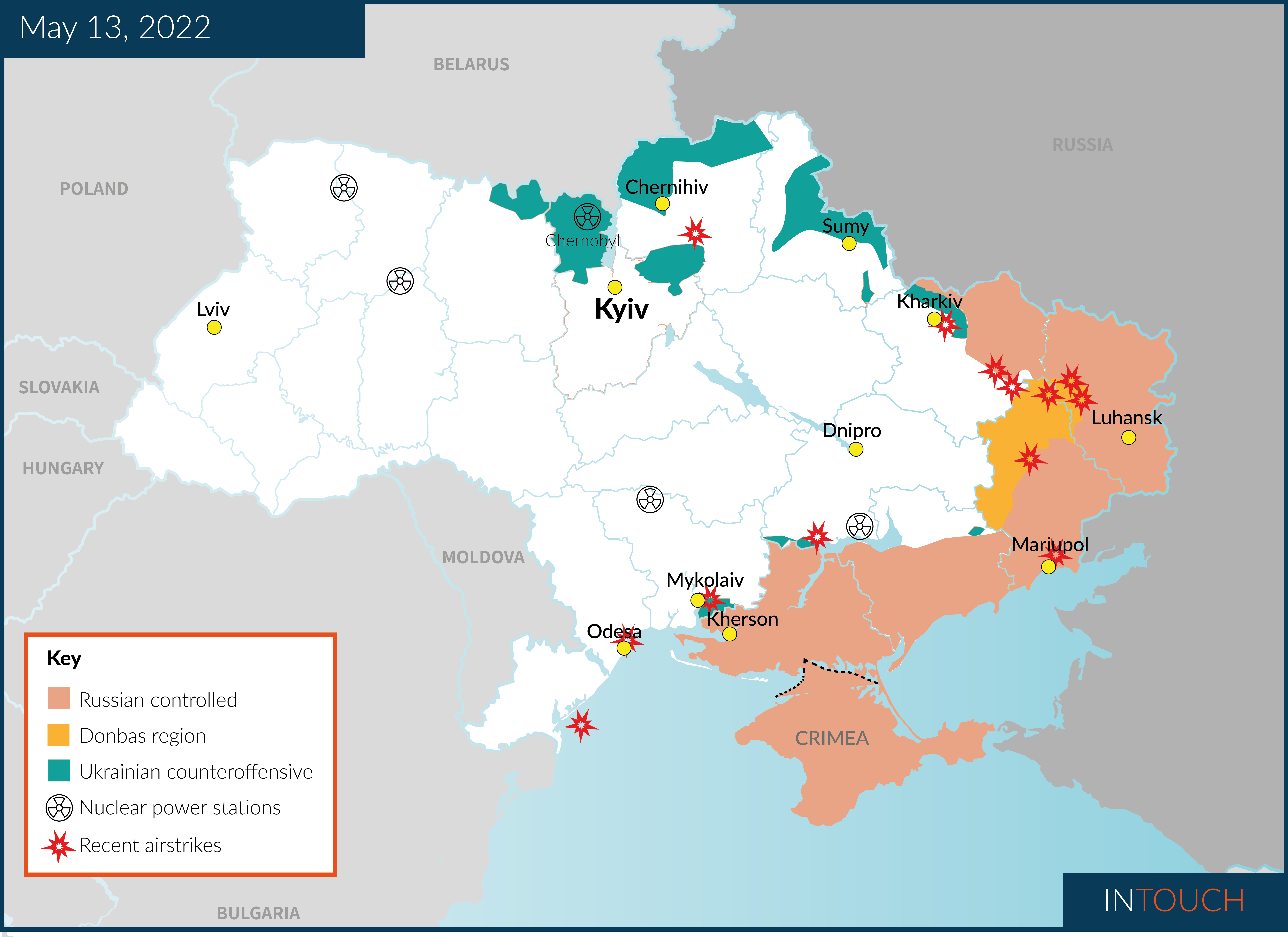 As the last remaining Ukrainian defence in Mariupol’s Azovstal steel plant continues to hold up despite near-constant Russian bombardment, experts and international observers are increasingly noticing the same thing: a distinct lack of Russian progress along the frontline in the eastern Donbas region. Last week, it was feared that Moscow would celebrate its May 9 Victory Day by announcing major battle wins; however, no such victories were reported, despite ramped up Russian offensives, as Ukrainian defensive positions successfully repelled most advances. Instead, Russian President Vladimir Putin further fed the Russian war propaganda machine, claiming that the West had instigated the war by provoking Russia into taking military action in Ukraine. Meanwhile, a Russian soldier is scheduled to go on trial for allegedly killing an unarmed Ukrainian civilian in the north-east Sumy region. The trial marks the first time a member of Russian military personnel will be prosecuted for a war crime since Putin ordered the invasion of Ukraine.

Increased Russian attacks have been reported in the Chernihiv region over the past week, including deadly Russian attacks on a school and dormitory on Thursday. Recent intelligence updates suggest that the Russian forces are also transferring additional artillery units to border areas near the region. Russian airstrikes were reported in the Novgorod-Seversky area of Chernihiv overnight on Thursday. The strikes were confirmed by local Ukrainian officials and were described as having resulted in an undetermined number of casualties, having targeted critical infrastructure, such as schools and administrative buildings, as well as residential properties. Other areas to report increased shelling over the last week include the Gorodnya area of Chernihiv and the Shostka area of the Sumy region.

Russian attempts to push through parts of northern Luhansk, including Kramatorsk and Sloviansk, are ongoing. It’s believed that Russian forces have managed to take control of almost all of Rubizhne and are set to launch a new ground assault on Severodonetsk from recently gained territory in Rubizhne within the next week. Meanwhile, Ukrainian forces have been preventing and repelling Russian efforts to cross key rivers in the eastern Donbas region, largely by blowing up multiple bridges. Russian attempts to cross rivers in contested areas around Izyum and Severodonetsk come as part of Moscow’s wider aim to break through to Sloviansk and Kramatorsk.

The UK defence ministry has stated that the primary Russian objective in these areas is to encircle the Ukrainian forces and isolate them from reinforcements and support by Ukrainian military units stationed in the west. Typically, attempts to cross rivers in highly contested areas such as these are considered risky military manoeuvres. Moscow’s ramped up efforts to cross the rivers suggest that their frontline is under intense pressure to gain ground in eastern Ukraine following weeks of limited progress, even though the bulk of the Russian military force is concentrated in Donbas after withdrawing and redeploying units from the northern Chernihiv and Kyiv regions last month.

Elsewhere in Luhansk, dozens of people were killed in a Russian airstrike on a school in Luhansk’s Bilohorivka. Some 90 civilians had been sheltering in the building when it was struck by Russian shelling over the weekend. Initial death toll figures placed the total number of fatalities at around 60.

Russian forces have continued to conduct artillery strikes and air raids on the besieged southern port city of Mariupol, focusing efforts on blocking Ukrainian fighters in at the Azovstal steelworks. Most of Mariupol has been razed to the ground and is now under Russian control. Meanwhile, off the coast, Ukrainian forces claim to have hit a Russian navy logistics ship near Snake Island (aka Zmiinyi Island), in the Black Sea. The Russian vessel had been carrying an air defence system from Russia's northern fleet to Snake Island when it was hit and sustained serious damage. Moscow has not confirmed details of the incident or reported any casualties thus far. As of Friday 13 May, the ship reportedly remains afloat. Snake Island is situated south of Odesa, in the north-west of the Black Sea. The port city of Odesa has also been hit by multiple missile strikes within the past week, prompting warnings from Ukrainian President Volodymyr Zelenskyy that Russia’s blockade of Ukraine’s Black Sea ports threatens global food supplies.

Evacuation trains bound for the western city of Lviv continue to leave major towns and cities still under Ukrainian control in other parts of the country, including the capital city of Kyiv. Regional authorities in war-torn parts of the country have continued to urge residents to flee to western regions, which have seen significantly fewer Russian attacks, although they have not escaped the violence altogether. Lviv continues to be at the heart of evacuation and humanitarian efforts operating both in and out of Ukraine.

Further evidence has surfaced this week of the Russian offensive in eastern Ukraine having stalled – particularly in the Donetsk region, although some limited progress has been made by Russian advances in northern Luhansk, where Moscow has recently been concentrating efforts in a bid to take swathes of territory near Severodonetsk and Izyum. Russian offensive efforts in Kharkiv also appear to have been ramped up, in a likely attempt to encircle areas surrounding Izyum, and subsequently, Kramatorsk. The Ukrainian counteroffensive is expected to continue in areas surrounding Kharkiv, with the prospect of a further expansion in a southerly direction towards Izyum. Civilian deaths and casualties continue to be reported throughout the Donbas region on a daily basis due to frequent shelling by the Russian forces.

On the international scene, Russia has lashed out at the West again over the past week – first accusing the West of warmongering before threatening to retaliate over Finland potentially joining the North Atlantic Treaty Organisation (NATO). In response to Finland confirming plans to submit an official application for membership to the alliance, Moscow stated that it would be forced to take “retaliatory steps” and that neighbouring Finland’s bid to join NATO would seriously damage bilateral relations, as well as the wider security and stability of northern Europe. Finland has, until now, stayed out of NATO to avoid antagonising Russia. NATO Secretary General Jens Stoltenberg has said that the membership process for Finland and Sweden would evolve quickly, with the US promising its backing to both countries if they apply. Russia described retaliatory measures as being both “military-technical and other nature, in order to neutralise the threats to [its] national security that arise from this”.