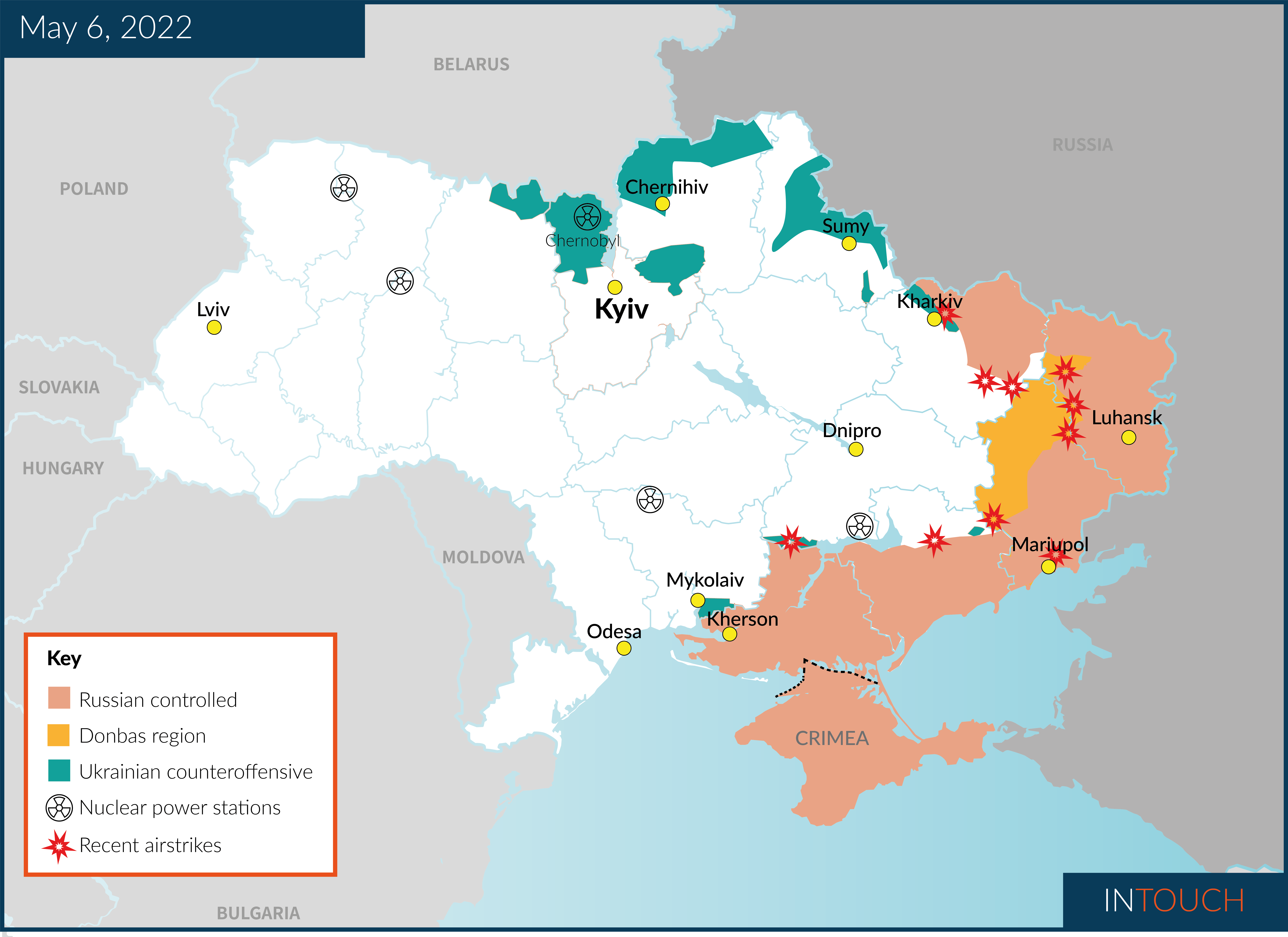 Russian military efforts are being ramped up in the lead-up to Moscow’s annual 9 May Victory Day celebrations as Russian President Vladimir Putin reportedly hopes to make serious gains on the battlefield. Meanwhile, reports have emerged indicating the US may have helped the Ukrainian military target and kill several Russian generals, and that the US also provided intel which helped Ukraine sink the Russian warship Moskva. Ukrainian estimates place the approximate number of children who have died since the start of Russia’s invasion of Ukraine at 223, while a further 408 others are also understood to have been injured. Of these, over half have been reported in the Donetsk region, closely followed by Kyiv, Kharkiv, Chernihiv, and Kherson. The latest figures come as the UK’s ambassador to the UN told the Security Council that Russia is deliberately targeting civilians in clear violation of international humanitarian law, calling Russia’s war one which had been “designed to terrorise and kill”.

Kyiv has shifted from being at the heart of the fighting in Ukraine to returning to a political base for Ukraine leadership. Over the last month, since Russia withdrew forces from the northern regions, more and more international leaders have travelled to Kyiv for clandestine talks with government officials as they continue to navigate the best course out of conflict. A senior presidential adviser in Kyiv is understood to have indicated that – due to a shortage of weapon supplies - the Ukrainian forces are unlikely to launch a large-scale counter-offensive against Russia before mid-June. During a conference recently held in neighbouring Warsaw, international donors pledged $6.5bn in aid for Ukraine, with German officials committing to a further $130m in humanitarian aid. Berlin is also set to send Ukraine seven self-propelled howitzers, while the Netherlands has pledged five artillery systems.

Moscow is alleged to have made several failed attempts to advance in the eastern Kharkiv and Donetsk regions. Despite limited progress, US President Joe Biden, along with German Chancellor Olaf Scholz, have both refused to recognise Russian territorial gains in Ukraine. Recent analysis suggests Russian forces have struggled to take much ground along the eastern frontline due to heavy losses disrupting their momentum. Fighting remains most intense in the eastern city of Izyum.

The Ukrainian armed forces are said to be preparing themselves for stronger Russian offensives over the next three to four days in the Luhansk region, with Russia’s expected aim to break through to Severodonetsk or Popasna. Regional governor Serhiy Haidai stated that the city of Popasna has already been destroyed, describing the situation there as round-the-clock bombing. The UK defence ministry has also indicated that Russia is likely to attempt to recapture Severodonetsk and Kramatorsk in a bid to consolidate Moscow’s military control in north-eastern Donbas. As of Friday morning, Russia’s defence ministry claims to have struck a large ammunition depot in Kramatorsk with missiles. Moscow has also alleged that two Ukrainian warplanes were also shot down by Russian air defence in Luhansk.

Russia is understood to be stepping up efforts in Azovstal in what appears to be a push for a symbolic military success by 9 May; however, Ukrainian resistance has reportedly led to significant Russian losses and has frustrated Moscow’s operational plans in southern Donbas. While most of the southern port city of Mariupol has been seized by the Russian forces, the battle still rages in and around the Azovstal steel plant, where the last 2,000 Ukrainian troops holed up there have vowed to “stand till the end”. Russian forces stormed the plant earlier this week, sparking violent fighting inside the complex, despite Russian statements claiming they would only seal the site off. Russian President Vladimir Putin has called on Kyiv to order its fighters holding out in the steel plant to surrender.

UN Secretary General Antonio Guterres has confirmed that a UN envoy is en route to Mariupol to evacuate more civilians – so far, around 500 people have now been evacuated from the steel plant and the city, as well as surrounding areas. Reports on the ground describe how occupying Russian forces have turned the city into a “concentration camp”, with anyone out on streets required to present two sets of paperwork. Unconfirmed reports claim over 2,000 men were forcibly taken to a so-called filtration camp in Russia’s regional area of Bezymyannoye. Meanwhile, Russian forces are apparently readying the occupied city of Kherson for May 9 celebrations, with plans to import participants from the Crimea and other regions.

In the news this week are reports that US intelligence helped sink the Russian warship Moskva – the flagship of Russia’s Black Sea Fleet. The Moskva sank on 14 April after being hit by two Ukrainian Neptune anti-ship missiles. Recent reports claim the attack took place after Kyiv asked Washington to identify and confirm the location of a suspected Russian warship in the Black Sea, just south of Odesa. US officials have confirmed the provision of intelligence to Ukraine but stated the US didn’t participate in Kyiv’s decision-making process and that it received no advance warning that the ship would be targeted. Pentagon spokesperson John Kirby denied reports the US had provided information on the whereabouts of senior Russian generals on the battlefield so that Ukrainian forces could kill them. The developments are significant, as they beg the question: to what extent can the West support Ukraine from afar before Russia accuses the US of effectively declaring war?

While things remain relatively quiet in the north and west of the country, intense fighting continue to rage in the east and south, where Russian forces are thought to be preparing for a new major offensive. Evacuation efforts continues to prioritise Mariupol, with international backing, while Ukrainian forces along the eastern frontline largely appear to be aiming to hold their ground as they ready themselves for a counter-offensive next month.

As Russia cements its hold on gained territory in Donbas and Kherson, increased reports of civilian resistance in occupied areas continues to mount. While the situation is said to remain calm in the city of Kherson, surrounding areas are understood to paint a very different picture, with villages along demarcation lines almost entirely blocked off in places. Ukrainian President Volodymyr Zelenskyy has accused the Russian troops of destroying or damaging nearly 400 healthcare institutions throughout the country, while areas under Russian occupation are feared to be facing a “catastrophic” situation in terms of dwindling medical supplies. In the occupied towns of Zaporizhzhia and Mykhailivka, Russian authorities are also said to be imposing new taxes and are forcing locals to re-register businesses.