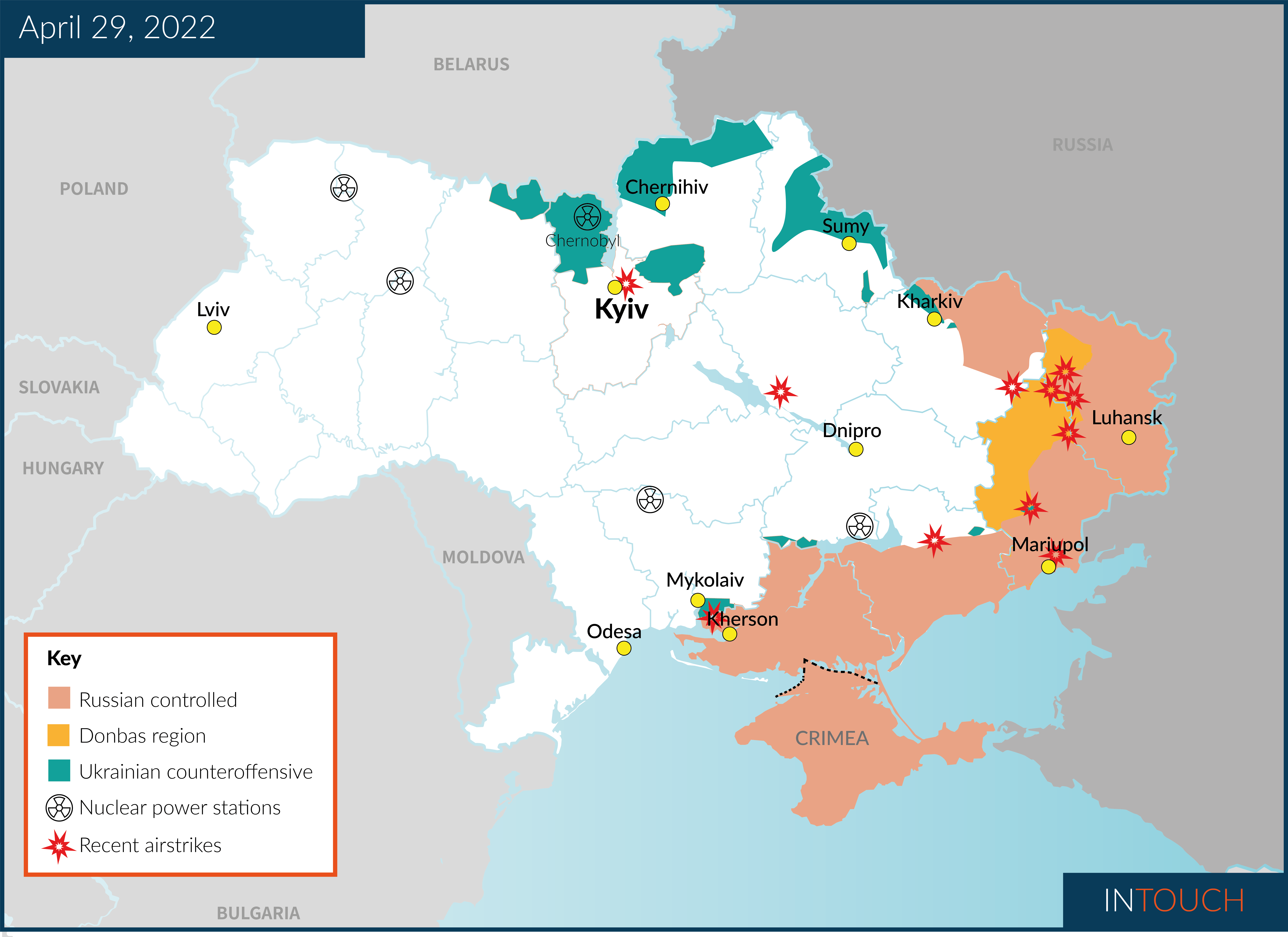 As intense fighting continues along the main frontline in the east of Ukraine, Moscow has continued to ramp up pressure in Mariupol amid a blockade on the metal works plant where the last of the Ukrainian defence forces are holed up. Elsewhere, reports of explosions in a breakaway region of neighbouring Moldova have sparked fears of the conflict spreading outside of Ukraine. This comes as Russia reports more fires and alleged strikes in Russian bordering areas of Belgorod which Moscow has blamed Ukraine for. Meanwhile, a Russian missile attack on Kyiv has resulted in several civilian casualties, including a Kyiv-based journalist who died. The attack came as UN chief Antonio Guterres visited the capital, renewing concern surrounding the safety of high-profile diplomats and political figures visiting Kyiv for talks.

Large areas around Kyiv which were retaken by Ukrainian troops in early April following the Russian retreat remain under Ukrainian control due to successful counterattacks. Kyiv now controls all areas towards the country’s northern borders with Belarus and western Russia; however, the aftermath of violence in the region has left a lasting impression and Russian strikes continue to target parts of the north. Recently, Russian missile strikes are alleged to have caused two explosions in the capital city of Kyiv, coinciding with a visit to the city by UN chief Antonio Guterres.

Russia has claimed the strikes, saying they were among several missile strikes to be carried out on Ukraine on Thursday 28 April using “high precision” missiles. The strikes allegedly aimed to destroy space-rocket production facilities in the capital, along with 10 Ukrainian “military assets” and three power substations across the country. The residential block which was struck in Kyiv was situated opposite a large military factory.

Fighting in the east has intensified over the past week as Russian forces continue their offensive with the apparent goal of achieving “complete liberation” in Donbas. Russian troop numbers have substantially increased in Russian-controlled territory according to latest Western intelligence, with satellite imagery indicating a build-up of Russian forces along the Ukraine-Russia border region as large convoys travel towards the frontline.

Moscow’s gains in the east have been limited so far due to well-established Ukrainian defences which have been in place in the region since fighting first broke out there in 2014. However, Ukrainian troops in Donbas are estimated to be outnumbered by a three-to-one ratio and are expected to concede more ground in the weeks to come as they focus the bulk of their defensive capabilities on key cities, where Russian troops will face more difficulties in taking territory. Russian troops are reported to have had some success in pushing south from the city of Izyum towards Slovyansk and Barvinkove.

Russia has been targeting the south throughout the war, with the apparent aim being to secure full control of the region. Having initially made rapid gains in Kherson during the first few weeks of the war, Russian forces were forced to shift their approach from offensively taking new territory to holding the region, having fulfilled their main objective of creating a land corridor between Crimea and the Donbas region. Strong resistance from Ukraine has prevented advances past Mykolaiv, while the siege of Mariupol has also depleted Russian troops and military equipment in the south-east.

The southern port city of Mariupol is now mostly under the control of Russian forces, with the exception of Azovstal steel plant, where several hundred Ukrainian troops remain holed up, surrounded and blockaded by Russian troops as the industrial complex continues to come under heavy aerial bombardment. Calls have been made for evacuation efforts to clear the site of Ukrainian forces, while Moscow is also facing further accusations of war crimes amid its intense shelling of the city, with the local mayor claiming the loss of at least 20,000 civilians.

Two independent British humanitarian volunteers are reported to have been captured by Russian forces in the Zaporizhzhia region. The pair were apparently coordinating with the non-profit Presidium Network to provide humanitarian assistance when they were allegedly detained at a checkpoint near the regional capital earlier this week. It’s believed the volunteers had been trying to evacuate a Ukrainian civilian family at the time. Unverified sources suggest the civilian family were subsequently subject to a Russian military raid and have allegedly been accused of espionage.

Russia continues to attempt to push its forces towards the south-western port city of Odesa, with the aim of cutting off Kyiv’s access to the Black Sea; however, advances remain stalled at Mykolaiv, where a fierce Ukrainian resistance has been repelling Russian attacks for several weeks now.

Meanwhile, in the bordering Russian-backed breakaway Transnistria region in neighbouring Moldova, a series of explosions have been reported over the last week which have prompted the Russian-backed regional government there to accuse Ukrainian forces in the Odesa region of striking Transnistria. Kyiv has dismissed the accusations, claiming the strikes are so-called ‘false flag’ operations as part of a Russian attempt to destabilise the region and spread conflict. It’s believed the Russian military objective in the region is to take full control of Ukraine’s southern coastline and to establish a land corridor with Transnistria – where hundreds of Russian troops are already based.

As clashes in the east continue to occupy Ukrainian forces with marginal Russian gains, international attention has turned to the south-west, where recent activity in Moldova’s Transnistria region has come alongside reports that Russian-speakers are being oppressed in Moldova – a narrative which sounds suspiciously similar to Moscow’s justification for backing separatist groups in Donbas before it launched its invasion of Ukraine. A red “anti-terrorism” alert is now in force in Transnistria, prompting widespread fears the region is about to be at the heart of another major Russian offensive, one which would effectively see Russian troops establish another frontline in south-western Ukraine to advance on Mykolaiv and Odesa from two sides. If Transnistria is used as a launchpad to get Russian troops into parts of western Ukraine, it will seriously compromise the integrity of evacuation and humanitarian efforts operating in and out of Lviv and could irreversibly change the nature of the war in Ukraine.