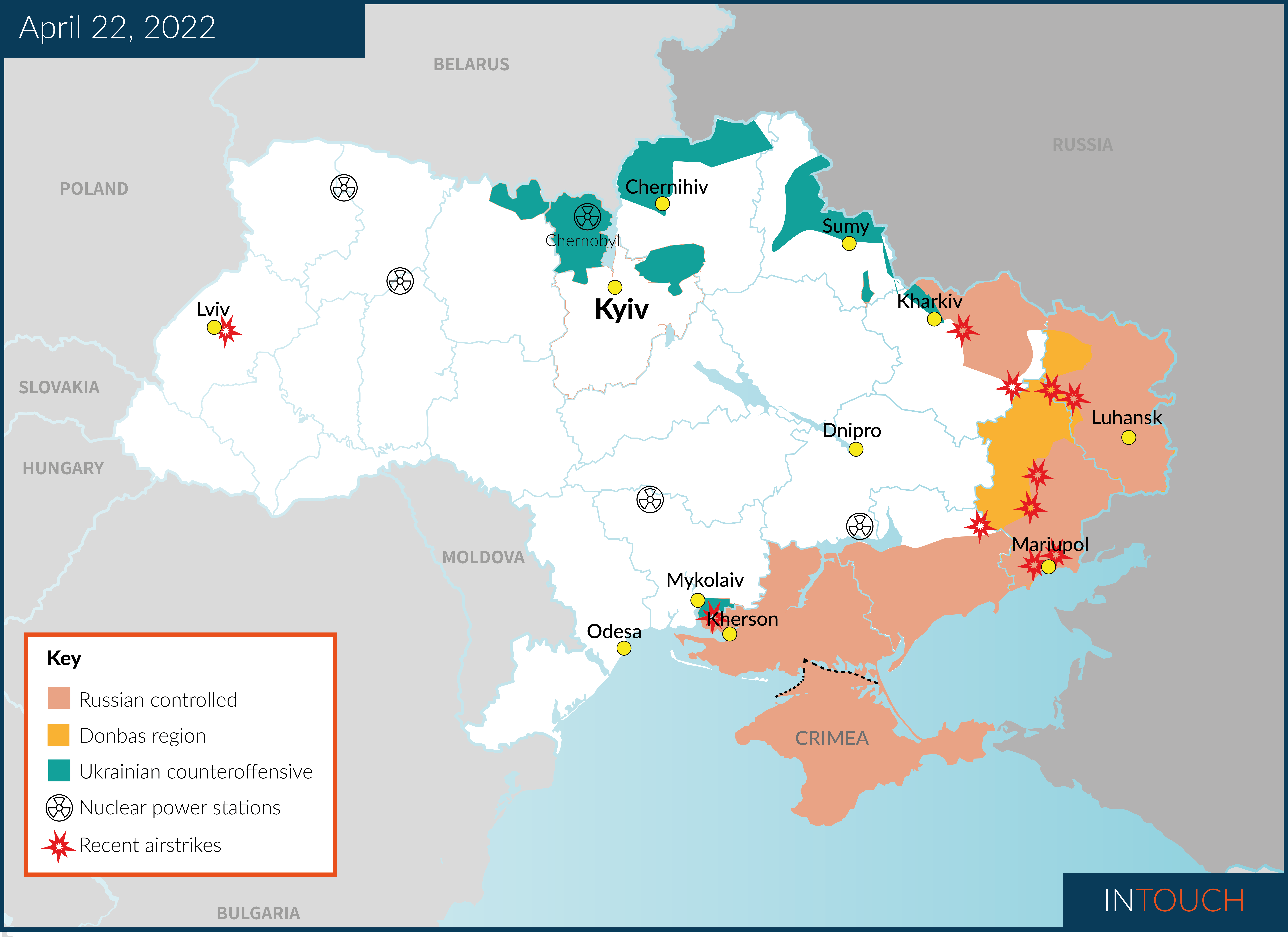 This week’s situational report for Ukraine will mostly focus on the recent developments in the eastern regions of Donetsk and Luhansk, following the launch of Russia’s new large-scale military offensive in the Donbas region – an area in eastern Ukraine which has been at the heart of war between Ukraine and Russia for almost a decade. Moscow’s strategised move to concentrate efforts on progressing the eastern frontline in Donbas has come alongside calculated military manoeuvres and withdrawals in the south and north of the country, which have largely served the purpose of enabling the Russian forces to reinforce and double-down in Donbas whilst holding captured territory in the southern Kherson region and maintaining pressure on the south-eastern port city of Mariupol.

While fighting has significantly decreased in recent weeks in the north of Ukraine, shelling continues to target key cities, including Kharkiv, which sits near the eastern reaches of the northern region. It’s suspected the Russian forces hope to launch a new offensive towards the Kharkiv region from parts of northern Luhansk. Ukrainian military intelligence officials have indicated Moscow is expected to push troops in the direction of Zavody – taking first Rubizhne in the east, before connecting up with troops in Izyum. The Russian military is understood to have concentrated 25 battalion tactical groups and several airborne units in the strategic area of Izyum, which links Donbas to the northern region.

Moscow has claimed near total control of the besieged southern port city of Mariupol – a claim which has yet to be independently verified. The blockade of the Azovstal steel plant in Mariupol is thought to be a strategy by Moscow to free up Russian troops. On Thursday, Putin called off plans to storm the plant, where the last remaining Ukrainian forces are said to be holed up. Instead, troops were ordered to blockade it – to contain the last dregs of resistance in Mariupol whilst freeing up Russian forces to be deployed elsewhere without incurring the inevitable Russian casualties which would come about if Russian troops were to storm the site.

Meanwhile, in Kherson, civilians were unable to leave occupied villages in the region via an agreed humanitarian corridor on Thursday due to near-constant Russian shelling. It’s also claimed Russian soldiers detained the evacuation column at a checkpoint and forced vehicles to turn around. It has also been reported that Russian troops plan to mobilise the local population in the city of Kherson. Ukrainian military sources claim Moscow seeks to "forcibly mobilise" residents to fight for Russia.

This week, the western city of Lviv recorded its first civilian deaths since the war began. The deaths came after Russian strikes hit the city on Monday, killing seven people and injuring a further 11. Meanwhile, civilians continue to flee fighting as hoards of refugees travel to Lviv from Zaporizhzhia. Trains to Lviv continue to be in high demand amid the mass internal displacement in Ukraine, as more and more evacuees seek to reach the western city in order to make connections to flee to neighbouring countries.

The East and Donbas

Heavy shelling and intense fighting continue to be reported in the eastern Donbas region amid the renewed Russian offensive. On Thursday, Russian troops reportedly took 40 villages in the east of the country, although Ukrainian officials claim the gains are temporary. Moscow aims to advance further towards central Ukraine, targeting the Buhayivka, Barvinkove, Krasnyy Lyman, Lyman, and Popasna areas. Kreminna and Rubizhne, both located just outside of Severodonetsk, have also been identified as key areas the Russian forces are driving towards. It’s believed Russia’s limited progress amid its new offensive so far could be in part attributed to Moscow’s inability to fully recover from major military losses suffered during the first few weeks of the war. It’s estimated that Russia has around 70,000 troops now stationed in eastern Ukraine. Unlike fighting in and around Kyiv, the battle for Donbas is expected to resemble the type of conventional warfare seen in World War Two, with on the ground combat, trenches, and more widespread use of heavy military weaponry and equipment such as artillery fire and tanks.

The Russian-backed separatist rebels in the Donetsk and Luhansk regions (collectively known as ‘Donbas’) have been fighting the Ukrainian forces since 2014 and the bulk of Ukraine’s best military forces have long been stationed and trained in the region. The Donbas region encompasses Ukraine’s old coal and steel-producing areas, running from outside Mariupol up towards the country’s northern border, near Kharkiv. The Donbas region is largely Russian-speaking, and prior to the siege on Mariupol, the southern port city was among the most pro-Russian areas in Ukraine.

The rebellions in Donbas started out as pro-Russian and anti-government protests, which were part of a wider pro-Russia movement across southern and eastern Ukraine. The self-declared Donetsk and Luhansk People’s Republics (DPR and LPR) controversially held referendums on the status of Donbas in 2014, with an overwhelming majority allegedly voting for independence. The referendum was dismissed as illegal and undemocratic by Ukraine and the wider international community, bar Russia - which falsely claimed Russian speakers in the region were being persecuted. Prior to Russia’s military backing and intervention in the region, there was little credible evidence of widespread support for separatism in Donbas, and even less evidence of public backing for an armed rebellion.

It's widely suspected that Russia exploited what was originally a marginal pro-Russian separatist movement and manufactured a false pretext under which to intervene, with the goal of establishing a pro-Russian autonomous government in the region through which it could influence Ukraine. During 2014 – 2015, the conflict in Donbas triggered a mass exodus, with approximately 1.6 million people internally displaced, while another million fled to neighbouring Russia. Frequent low-intensity ceasefire violations became the norm in the region for many years. The resulting ‘frozen conflict’ deterred pro-Ukrainian residents from returning to occupied territory. A de facto frontline emerged, separating Russian-backed separatist-held territory and Ukraine-controlled areas. On Kyiv’s side of the line, the vast majority were against Russian military intervention and an even larger majority believed there was no discrimination against Russian-speakers. The difference between the phrases ‘pro-Russian’ and ‘Russian-backed’ is a subtle but incredibly important one, as neither the DPR nor the LPR actually seek to install a Russian-controlled Donbas territory, but rather view it as a necessary means to an end to reach their main goal of eventual independence.

By officially recognising the independence of the republics in February 2022, Moscow effectively nullified ceasefire agreements ahead of launching its invasion under the false pretext of protecting the separatist Russian-speaking population of Donbas. Unfounded accusations of genocide in the east of Ukraine have been manufactured as part of a broader Russian propaganda campaign to create the illusion of overwhelming pro-Russia sentiment on the ground, despite growing evidence to the contrary. Having driven out pro-Ukrainian residents, to what extent the remaining inhabitants of Donbas actively support Russian intervention no longer matters to Moscow, as the Kremlin’s web of propaganda has been weaved so tight, even the separatist leaders in Donbas can’t escape it. Moscow’s end game is thought to be, not hand over captured territory to the DPR and LPR, but to install puppet leaders and annex Donbas, as it did with Crimea in 2014.