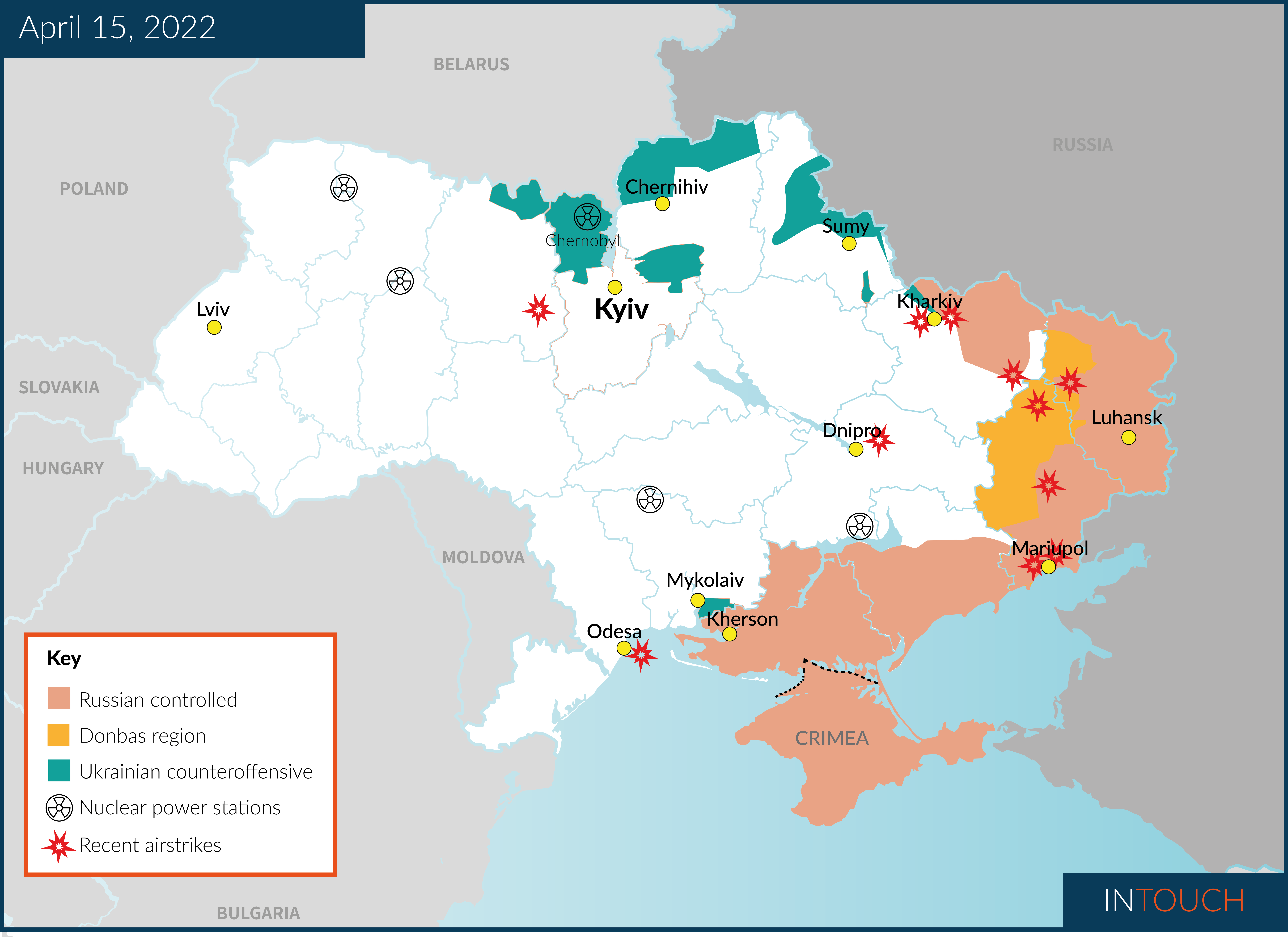 Russia has continued to beef up its forces for a new assault in the eastern Donbas region of Ukraine. Defensive positions throughout the Donetsk and Luhansk regions have been reinforced with redeployed Ukrainian forces, while civilians are urged to flee towards central Ukraine. The upcoming battle for control in eastern Ukraine is widely anticipated to be critically decisive. Meanwhile, the wider world has been escalating diplomatic measures to ramp up pressure on Russia following the uncovering of alleged atrocities and war crimes committed by Russian soldiers in occupied areas of northern Ukraine. The International Criminal Court’s chief prosecutor described parts of the country as a crime scene during a recent visit to Bucha, near Kyiv. The Organisation for Security and Cooperation in Europe (OSCE) has also found evidence of war crimes and crimes against humanity by Russian forces in Ukraine, although Moscow has repeatedly denied targeting civilians. The usage of chemical weapons in Ukraine continues to be a prominent concern, as does the focus on securing agreements on civilian evacuations and aid deliverance.

The aftermath of Russia’s withdrawal from the northern region continues to be felt, as Ukrainian forces retaking captured areas uncover thousands of mines. Ukrainian President Volodymyr Zelenskyy described Ukraine as one of the most mined areas of the world, with more than half the country’s land now thought to be laced with explosives. Reports indicate Russian forces have planted a large range of explosives throughout occupied areas as they retreated in an alleged bid to maximise casualties. Sources on the ground describe civilian residential properties and vehicles being unnecessarily mined, with the apparent intention being to target civilians as they returned to their homes. Ukrainian authorities have reiterated that recently retaken areas are not safe to return to yet.

With a major Russian military offensive mounting in the east, it’s feared more areas in eastern and central-eastern Ukraine are set to face attacks, which are predicted to be increasingly indiscriminate in their nature. In the Donetsk region, the towns of Kramatorsk and Kostiantynivka have been identified as two areas likely to be hard-hit. The train station in Kramatorsk was the site of a rocket attack earlier this month which killed dozens of civilians trying to flee fighting. Recent intelligence indicates Russian forces are said to be targeting the rail infrastructure in central Ukraine, with another, separate attack on a smaller railway station disrupting 17 train routes throughout the region, severely impacting evacuation efforts out of eastern Ukraine.

In Dnipro, officials have claimed that more than 1,500 Russian soldiers have been killed amid fighting and that their bodies were now being kept in the city's morgues. It’s been stated that no effort has been made thus far by the Russian side to retrieve the bodies. Meanwhile, in Kharkiv, there has been a major uptick in attacks, as the city faces increased bombardment and shelling. On Thursday, the deaths of four civilians were confirmed due to Russian shelling.

Mariupol is said to be in the final throes of battle, as Russian troops encircling it double down on efforts to take control of the city. Ukrainian sources insist the city remains in Ukrainian hands, with officials in Kyiv disputing a recent claim from Moscow that Russian forces had taken full control of Mariupol following the alleged surrender of over 1,000 Ukrainian soldiers on Wednesday. Ukraine's defence ministry has rejected the Russian claim in a statement, saying it knew of no such surrender, but that a number of Ukrainian troops had been redeployed in the area. Mariupol’s mayor claims that 21,000 civilians have been killed in Mariupol since the Russian invasion began, and that more than 100,000 people are still awaiting evacuation from the city. Kyiv has also reiterated claims that Russian forces have used banned phosphorus bombs in Mariupol. Zelenskyy described Russia’s alleged use of the bombs as "terror tactics" against civilian whilst addressing the Estonian parliament on Thursday.

Along the coast in Russian-occupied Kherson, a local district council deputy has allegedly been taken captive by Russian forces from the town of Skadovs’k. Reports also emerged on Thursday of an apparent explosion at the Chornobaivka airfield in Kherson. Meanwhile, off the coast, a fire has broken out on a Russian warship in the Black Sea following a large explosion. The blast prompted the crew’s evacuation of the ship, Moskva – understood to be the flagship vessel of the Russian fleet. Ukrainian officials in Odesa claim to have hit the vessel with two cruise missiles, allegedly causing seriously damage. Russia has confirmed damage to the ship and the evacuation of the crew due to fire but claims the cause was an ammunition explosion.

In the western city of Lviv, hoards of people continue to amass as they flee fighting. The city is at the centre of massive internal displacement, with daily air-raid sirens sounding as intense fighting continues throughout rest of the country. Some 60,000 people arrived in the city per day for the first three weeks of the war, now, as a new Russian advance builds up in the east, numbers are estimated to be at around 10,000 a day. While Lviv has not been as directly affected by active fighting as other parts of Ukraine, the war has reshaped the city and now serves as the main international focus point for those wishing to leave the country, as well as those wishing to get aid and relief supplies in. Volunteers have also leant a hand to help make and distribute essential military supplies to the Ukrainian forces, including making camouflage nets. Wounded Ukrainian civilians are also being transported to Lviv for treatment. Many of them have been injured amid Russian shelling in Donbas.

Russia’s shift in military focus, although clearly observable, has been a carefully deliberated and drawn-out process which has enabled Russian troops to be withdrawn, resupplied, and redeployed with deliberated precision and optimum military strategy. Instead of weakening their offensive by attacking on three separate fronts, Moscow has moved to concentrate the bulk of their efforts in the east, while holding gained territory in the south and the Crimean Peninsula. Should Mariupol fall, the Russian forces will have total control of the south-eastern coast, freeing up critical offensive military units to be re-equipped and redeployed away from Mariupol towards the new frontline in Donbas. It makes sense that Russia would double-down on its efforts in the region, as the Russian-backed separatist republic forces in Donetsk and Luhansk have long fought the Ukrainian forces over disputed territory, and Russia’s declaration of recognition of independence for the two regions arguably acted as the false premise under which Moscow launched its invasion of Ukraine in the first place.