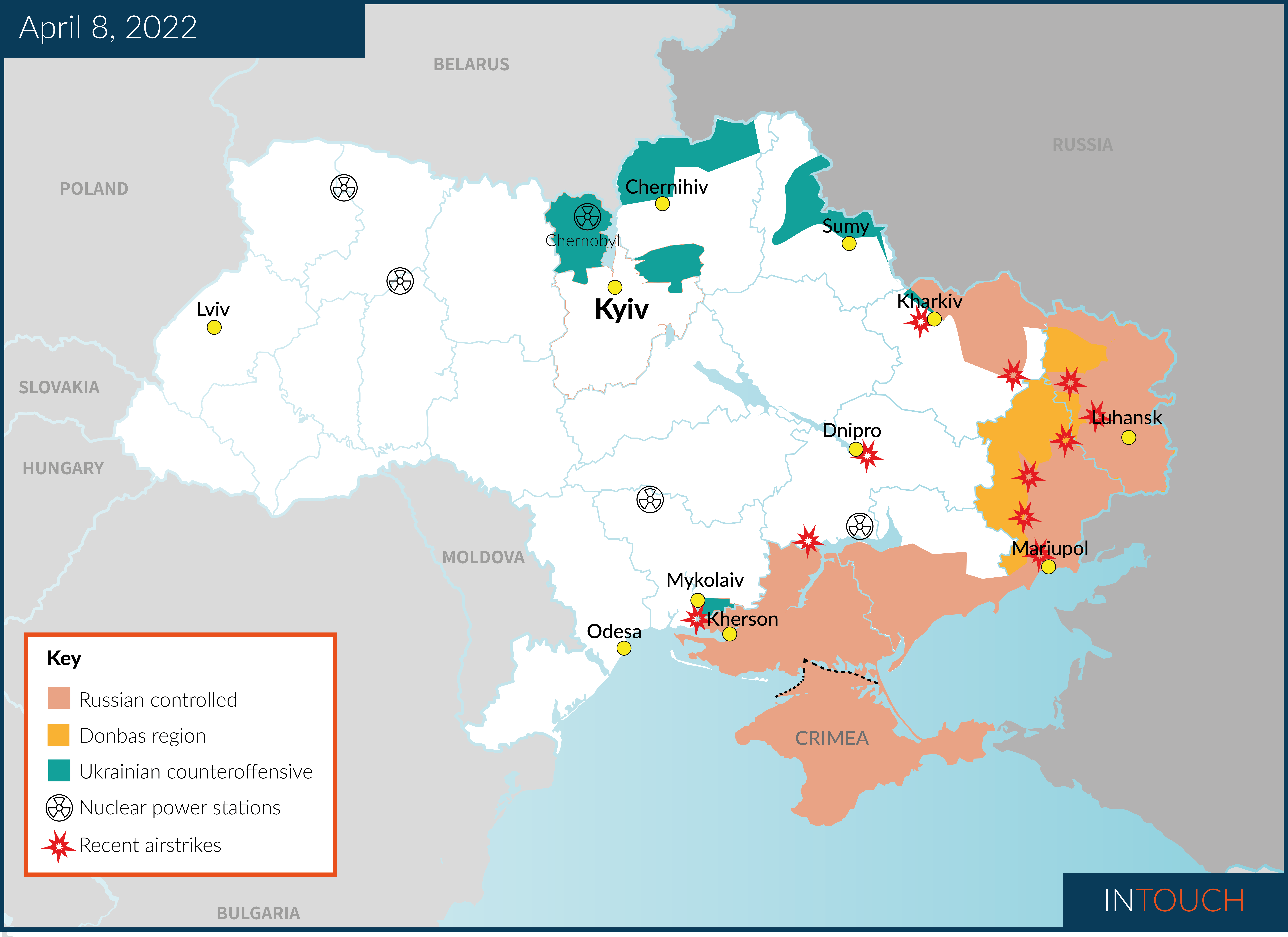 As the Russian invasion of Ukraine enters its 44th day, international attention continues to focus on alleged war crimes and atrocities purportedly committed by Russian troops after hundreds of civilian bodies were found in areas near Kyiv. Emerging evidence of mass civilian killings has led to an increase in sanctions on Russia, while the US, France, Germany, and other EU members have also expelled Russian diplomats. The EU has imposed a fifth round of sanctions, including: import bans on coal, wood, and chemicals; measures to prevent Russian vessels and trucks from accessing the EU; and a ban on transactions with four major Russian banks. On Wednesday, Russia was suspended from the Human Rights Council in a UN vote over the alleged war crimes. Meanwhile, Kyiv has asked NATO to provide weapons to Ukraine, saying help is needed in “days not weeks”.

Russian forces have now fully withdrawn from areas of northern Ukraine, with troops drawn back to neighbouring Belarus and Russia, where it’s expected they will be resupplied before redeployment to eastern Ukraine. As Russian troops have withdrawn, Ukrainian forces have launched counteroffensives to retake previously occupied territory. It is in these areas that mass civilian graves have been uncovered – many bodies showing signs of torture. First-hand accounts have also begun to emerge from those who survived the apparent purges, further fuelling global outcry and accusations of genocide. Human Rights Watch claims to have documented war crimes by Russian forces in the areas of Kyiv, Kharkiv, and Chernihiv, including a case of repeated rape and at least two cases of summary execution.

The situation in the towns of Bucha and Borodyanka, in the north-western outskirts of Kyiv, has been described by Ukrainian President Volodymyr Zelenskyy as “dreadful”, with at least 300 civilians thought to have been killed amid the mass slaughter. Evidence has also been found of Russian troops rounding up civilians in and around Obukhovychi – a village north-west of Kyiv – where it’s been reported that Russian soldiers used Ukrainian civilians as human shields. Russia has repeatedly denied all allegations.

It's estimated that any mass redeployment from Ukraine’s northern border areas is likely to take at least a week to organise and carry out, as it’s believed many of the Russian units which were recently withdrawn will be in need of significant replenishment. Russian forces already in the eastern Donbas region have continued their push westwards. Heavy shelling continues to be reported along most parts of the frontline in the region. Regional authorities in Donetsk and Luhansk have urged civilians to evacuate to safer areas in the centre or west of the country. Evacuations have been hindered though by the destruction of a key section of railway amid shelling on Thursday – leading to long queues at Kramatorsk train station while emergency repair work was conducted. Kramatorsk station has since been hit by a twin Russian rocket strike on Friday, resulting in dozens of casualties. Over 30 civilians have been killed and more than 100 others have been wounded. Thousands of people were at the station at the time, in what appears to have been a deliberately targeted attack on civilian evacuation efforts.

Evidence has recently emerged of three civilians having been tortured, killed, and their bodies burned in the eastern region of Kharkiv. It’s claimed Russian troops used car tyres to burn the bodies in a basement. The incident prompted suggestions from rights groups that the torture and arbitrary killing of Ukrainian civilians by Russian forces has been much more widespread than previously reported. Meanwhile, in the city of Dnipro, the mayor has urged all vulnerable citizens - including women, children, and the elderly – to leave the city amid growing fears of intensified fighting in areas to the east of it.

The International Committee of the Red Cross (ICRC) has been heavily involved in efforts to get aid in, and people out of, the besieged southern port city of Mariupol. It’s estimated that around 90 percent of the city has now been destroyed amid near-constant bombardment by Russian forces. Recent witness accounts from those still on the ground in the city have described it as a graveyard. Efforts by Kyiv to establish temporary ceasefire agreements with Moscow to enable humanitarian corridors to be set up for the safe evacuation of civilians have repeatedly failed, with Deputy Prime Minister Iryna Vere indicating civilians hoping to flee the city must do so in their own vehicles for the time being.

President Zelenskyy has recently issued a warning of alleged plans by Russian propagandists to use the corpses of Mariupol victims to stage a murder scene to be blamed on Ukraine. Zelenskyy called the alleged plans a “mirror response” to the atrocities uncovered in Bucha.

Over the past week, missile strikes have increasingly targeted infrastructure in the western port city and regional capital, Odesa. Russian forces have apparently launched a number of strikes on the city from positions in the Black Sea over the last 24 hours alone. Russia claimed on Friday morning to have destroyed a training centre for ‘foreign mercenaries’ near Odesa. A Russian defence ministry spokesperson released the following statement: “High-precision missiles of the Bastion coastal missile system destroyed a foreign mercenary assembly and training centre near the village of Krasnosilka, northeast of Odesa”. An oil refinery on the outskirts of the city has also been targeted over the past week. It's suspected Russian forces will soon move to take the port city of Odesa, sparking concern Moscow aims to partition Ukraine along the Dnieper river with an occupied eastern side, as well as control over Black Sea ports.

A major Russian military offensive is expected to be launched in eastern Ukraine over the next few days, with Ukrainian forces preparing defensive positions along the frontline. It’s likely Moscow may also ramp up attacks on Mariupol, which is coming ever closer to falling to the Russian forces which have encircled it. Should this be achieved, it will further enable the movement of Russian troops between key parts of eastern and southern Ukraine – allowing reinforcements to travel westwards along long stretches of Russian-occupied coastline towards Mykolaiv, with the aim to take more of western Ukraine, including Odesa.

The missile attack in Kramatorsk is the third major incident to spark accusations of Russian war crimes, following the Bucha massacres and the Mariupol theatre bombing - begging the question, how many more such incidents must occur before Moscow acknowledges a spade as a spade? Moscow has repeatedly met allegations with propagandistic rhetoric with an aim to warp the narrative for the Russian audience. Russia has denied responsibility for the strike on Kramatorsk railway station, alleging the missile was of a type only used by Ukrainian forces. Ukrainian accusations of mass civilian murders and extra-judicial killings by Russian troops in Bucha have also soured the mood amid online peace talks. Moscow has repeatedly denied targeting civilians and has claimed the deaths in Bucha are a “monstrous forgery” staged by the West in an alleged bid to discredit Russia as part of a wider ‘anti-Russia’ agenda.