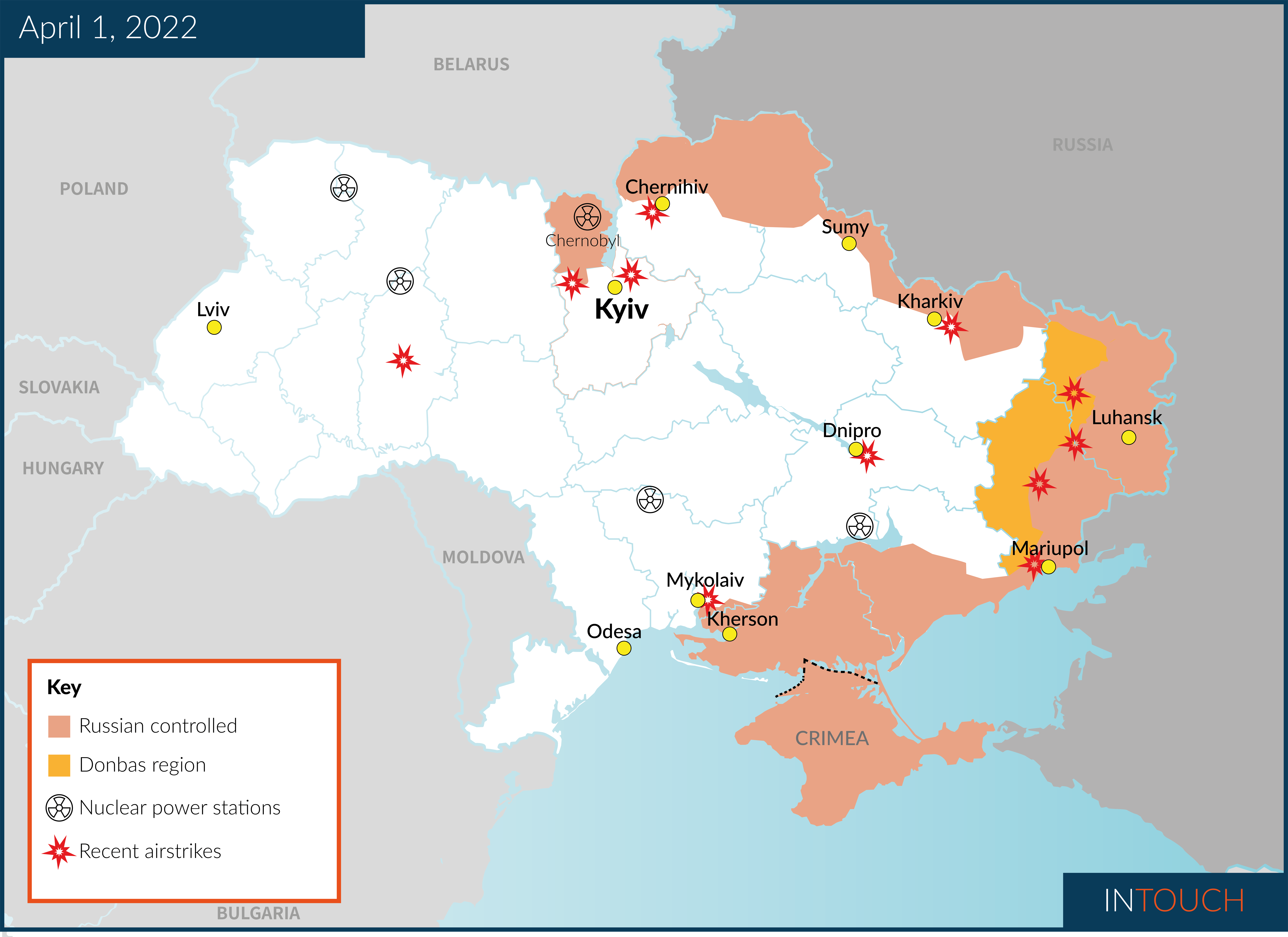 Over the past week, the attention in Ukraine has been on Russian promises to de-escalate fighting in the northern region around the capital city, Kyiv. The pledge from Moscow came in exchange for a potentially ‘neutral’ Ukraine with third-party security guarantees - the first sign of real progress to emerge from peace talks. Officials in Kyiv initially reported little or minimal difference on the ground throughout the first half of the week, with more substantial signs of withdrawal only confirmed in the last few days, as convoys near Kyiv redirect themselves to eastern Ukraine. On Friday, Ukrainian authorities also confirmed that Russian troops occupying the former nuclear power plant at Chernobyl have left the facility, seemingly retreating to the Belarussian border.

Ukraine’s state nuclear company, Energoatom, has also confirmed reports that Russian troops had dug trenches in the most contaminated part of the Chernobyl exclusion zone and are thought to have received significant radiation doses. It’s unclear whether or not the radiation was severe enough to require hospitalisation; however, unverified reports indicate some Russian troops are believed to be receiving treatment for radiation in Belarus. Radiation levels at the plant itself are said to be within the normal range. The International Atomic Energy Agency is in consultations to send a mission to the plant over the next few days.

Elsewhere in the north of Ukraine, there has been a reported withdrawal of Russian forces from the town of Hostomel near Kyiv, next to a strategically important airfield. While Russian forces have been pulled back from the town, troops are also said to be digging in nearby, to cement positions in the town of Bucha. Ukrainian forces are understood to have made successful, but limited, counterattacks to the east and north-east of the capital. Meanwhile, near Chernihiv, two villages situated along a main supply route between Chernihiv and Kyiv have allegedly been retaken by Ukrainian forces; however, air and missile strikes have continued to target both cities despite Moscow’s promises to reduce military activity in the area.

While news of a Russian withdrawal from Chernobyl has been welcomed internationally, NATO Secretary General Jens Stoltenberg has echoed the concerns of Ukrainian President Volodymyr Zelenskyy that Moscow is simply repositioning, rather than retreating. It’s feared promises of de-escalation may have been offered with the hidden agenda of regrouping, resupplying, and reinforcing the Russian offensive in the eastern Donetsk and Luhansk regions. Ukraine is bracing for a renewed Russian offensive, with Zelenskyy warning of new Donbas attacks.

Increased shelling has been reported along nearly all main positions along the frontline in Donetsk, and residential areas have allegedly been increasingly targeted by Russian shelling in Lysychans’k of Luhansk. Intensified shelling has also been reported in the Severodonetsk area, resulting in the deaths of at least two people and causing major damage to buildings. Meanwhile, in the central-eastern Dnipro area, a Ukrainian military facility was reportedly hit by a missile strike on Thursday, killing another two people.

A major missile strike hit a regional administrative building in Mykolaiv, killing dozens of people. A revised death toll on Friday indicated that at least 24 fatalities had been reported as rescuers continued to search the debris for survivors. Much of the focus in the south of Ukraine over the past week has been on securing humanitarian access to Mariupol, where an estimated 170,000 people are trapped with no power and rapidly dwindling supplies. Fresh efforts have continued to seek ways to evacuate civilians but have encountered difficulties as Russian forces continue to attack key routes and prevent buses from reaching the city. A convoy of 45 Ukrainian buses was said to be on its way to Mariupol on Thursday but was allegedly intercepted and blocked by Russian troops at a checkpoint near Vasylivka – three hours away from Mariupol. Teams from the International Committee of the Red Cross (ICRC) are understood to be ready to help extract civilians out of Mariupol towards Zaporizhzhia via the Russian-controlled port of Berdyansk, if Moscow and Kyiv can agree on ceasefire terms.

Russian forces have struggled to push much further past the Kherson region since last week, with troops seemingly stalled near Mykolaiv. Concerns had risen last week that should Russian forces gain ground near the city it could enable troops to sweep down towards Odesa, which continues to be sporadically targeted by missile strikes. Lviv continues to serve as a main base for those seeking to flee intense fighting throughout the rest of the country. Recent UN figures indicate more than four million Ukrainians have fled the country, with the majority doing so via borders to the west. Around 6.5 million Ukrainians are thought to have been internally displaced.

The term ‘de-escalation’ is a specific one, which doesn’t commit Russian forces to a retreat or total withdrawal from any areas mentioned. Moscow’s tactical use of the term hints at a strategy of deliberate misdirection. From the perspective of Kyiv and the West, ‘de-escalation’ was hoped to come with humanitarian recessions – such as reducing Russian attacks and shelling to the extent that more temporary ceasefires and humanitarian corridor civilian evacuations could be established and carried out. However, from a Russian perspective, the term means offensive operations have been scaled down to a degree which enables remaining troops to maintain pressure and hold carefully chosen areas – neither gaining nor losing key frontline positions. Meanwhile, the troops being withdrawn can be resupplied and redeployed to concentrate the bulk of Russia’s offensive force in the east, where doubled down Russian forces increase the likelihood of Moscow taking major swathes of territory, including Mariupol.

This very precisely sustained military pressure from Russia has made it difficult for Ukrainian forces to make more substantial gains in retaking lost territory. Ukraine has also struggled to agree more civilian evacuation routes due to deep mistrust hindering temporary ceasefire agreements from being reached. The outcome of peace talks held online on Friday 1 April is thought to be minimal, due to heightened tensions after Moscow accused Ukraine of attacking an oil depot in Belgorod, and one of the main takeaways from events of the past week is that there has been no observable change in Moscow’s overall objective in Ukraine, which is to pursue a military outcome, rather than a diplomatic solution.