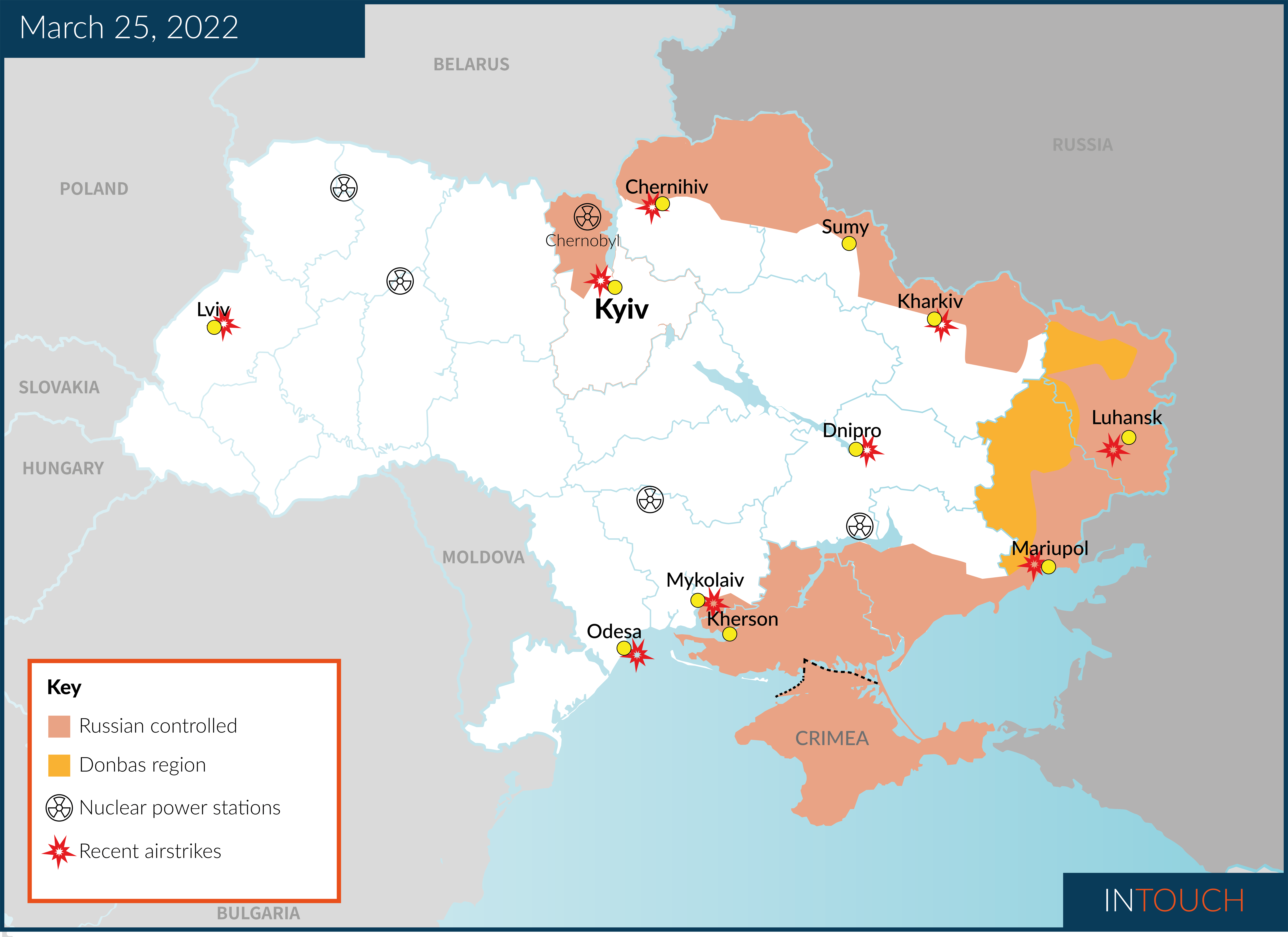 A month on, Russia’s invasion of Ukraine continues to see intense fighting spread throughout parts of Ukraine. Russian advances have slowed, with Ukrainian counterattacks successful in pushing back troops in some areas surrounding Kyiv. While the main frontlines remain situated in the north, east, and south of the country, aerial bombardment has begun to target more western areas over the past week, including Lviv and Odesa. There has been increased concerns surrounding the possible use of chemical and/or nuclear weapons by Russia, as well as increased reports of the use of banned phosphorus bombs by the Russian forces. The bombs were banned by the 1977 Geneva Convention and the use of them would constitute a war crime.

The US has warned Russia that NATO will respond if Moscow uses a chemical weapon in Ukraine. The statement came on Friday, after Western leaders agreed to provide Ukraine with more military and humanitarian aid following an unprecedented trio of summits on Thursday, as NATO, G7, and EU members convened in Brussels. G7 nations released a joint statement, saying they are appalled by Russian attacks in Ukraine and have backed an International Criminal Court (ICC) investigation into alleged war crimes. NATO confirmed the deployment of 40,000 troops to Slovakia, Hungary, Bulgaria, and Romania in a bid to bolster the strength of its eastern flank amid rising concerns the war in Ukraine may spread across eastern Europe. Whilst addressing European nations on Thursday, Ukrainian President Volodymyr Zelenskyy suggested sanctions imposed on Russia had been too little too late and urged them not to be too late in approving Ukraine’s request to join the EU. Meanwhile, the UN General Assembly has voted overwhelmingly to adopt a resolution demanding Russia end its war in Ukraine. Western leaders have accused Russian President Vladimir Putin of being uninterested in pursuing the prospect of genuine peace.

Reports have emerged that Ukrainian civilians are allegedly being arbitrarily detained and held against their will, and in some cases, subjected to enforced disappearances. The purported abductions are supposedly taking place in Russian-controlled areas. The UN has verified at least 36 cases of civilian detentions in which families have been denied information surrounding the fate of those being held. The reports come amid rising concern surrounding an escalating campaign of kidnappings and intimidation directed at civilians as Russian forces assert control over captured areas.

A small fire at an oil depot in Kalynivka, just south of Kyiv, has been contained. Russia claims to have destroyed the fuel depot, which was used to supply Ukrainian forces in central Ukraine. Dozens of fires have broken out across parts of Kyiv, caused by Russian shelling. Meanwhile, some 20,000 people have been evacuated from Boryspil, 30km east of Kyiv, as Ukrainian forces prepare to push back Russian advances on the city. Ukrainian counterattacks have reportedly been successful in retaking towns and defensive positions east of the capital. It’s understood the recapturing has in part been possible due to Russian forces having to fall back on overextended supply lines. Ukrainian forces also aim to further push Russian forces back in areas north-west of the capital, towards Hostomel.

Areas surrounding Kyiv continue to see frequent shelling. A Russian journalist is confirmed to have died amid Russian shelling in Kyiv’s Podil district earlier this week. As of Friday 25 March, the besieged northern city of Chernihiv has reportedly been fully cut off by Russian forces. Local officials indicate the city has now been surrounded and was under intense fire from artillery and warplanes. A key bridge in the city was destroyed amid shelling on Wednesday. In the Sumy region, Russia claims to have taken control of Izyum, while a huge fire has also broken out in Sumy and missile strikes have been reported in Okhtyrka.

In Luhansk, Russian shelling has struck more than 30 buildings, including several tower blocks, houses, and utilities, among other key infrastructure. Two children were killed amid fierce clashes in the city of Rubizhne in Luhansk, while another two children were also injured amid Russian shelling in Novomykhailivka, Donetsk, on Thursday. It’s estimated that as many as 135 children have died since the Russian invasion began. Regional authorities have also claimed the use of banned phosphorus bombs in the area by Russian forces, echoing similar allegations made by Zelenskyy in an address to NATO on Thursday.

On Friday, police officials in Kharkiv confirmed the deaths of four civilians in a Russian strike on a medical centre in the city’s Osnovyansky district. Three other civilians were also injured. Russian forces have been trying, unsuccessfully, to encircle Kharkiv, but have been hampered by low ammunition supplies. Dozens of fires have also been tackled throughout parts of Kharkiv, including at least six in the city – all of which have been caused by Russian shelling.

The besieged city of Mariupol continues to come under continuous heavy fire, with near-constant shelling as Russian forces surround the city. Efforts to agree safe evacuation routes for civilians have encountered more difficulties over the last week, with no humanitarian corridors or temporary ceasefire agreements reached for several days in a row. Instead, civilians have been urged to make their way to the occupied port city of Berdyansk, where evacuation measures have been agreed. A Russian ship docked in Berdyansk was allegedly destroyed in a strike on Thursday. Ukrainian Deputy Prime Minister Iryna Vereshchuk indicated there were hopes a humanitarian corridor could imminently be agreed to take citizens from Mariupol to Zaporizhzhia.

Last week, Russian forces struck a theatre in Mariupol which was being used as a makeshift bomb shelter. On Friday, local officials released an initial death toll estimation, stating that around 300 people are believed to have died in the bombing. It remains unclear whether emergency services have finished excavating the site – meaning the death toll could rise further still. Over 1,300 people had been sheltering in the building.

The south-western port city of Odessa has come under increased fire over the past week as Russian forces appear to be manoeuvring themselves into position to launch a full-scale offensive in the region. Most strikes have been fired by Russian naval forces and have targeted areas in the outskirts of the city. It’s believed an assault on the city led by ground troops has been held off by the success of Ukrainian forces in Mykolaiv and Voznesensk, where Russian advances have been repelled within the past week, preventing Moscow from advancing into the western regions. Should Mykolaiv fall, it could enable Russian forces to sweep down along the south-western coast and effectively cut off Odessa from the rest of Ukraine – disrupting major supply lines and isolating Kyiv’s last major Black Sea port.

Ukraine and the West

Following a flurry of Western diplomatic activity over the last week, with major summits being held in Belgium, here’s a reminder of which countries in Europe are members of the EU and NATO. 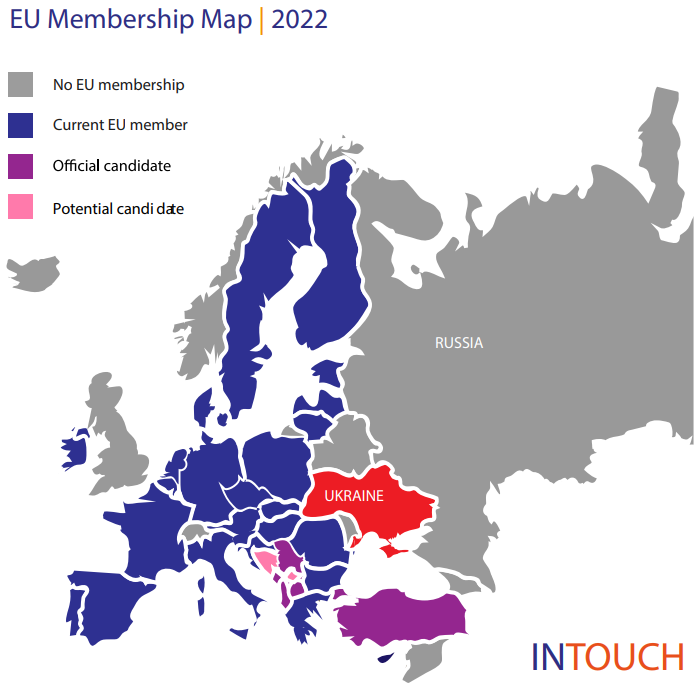 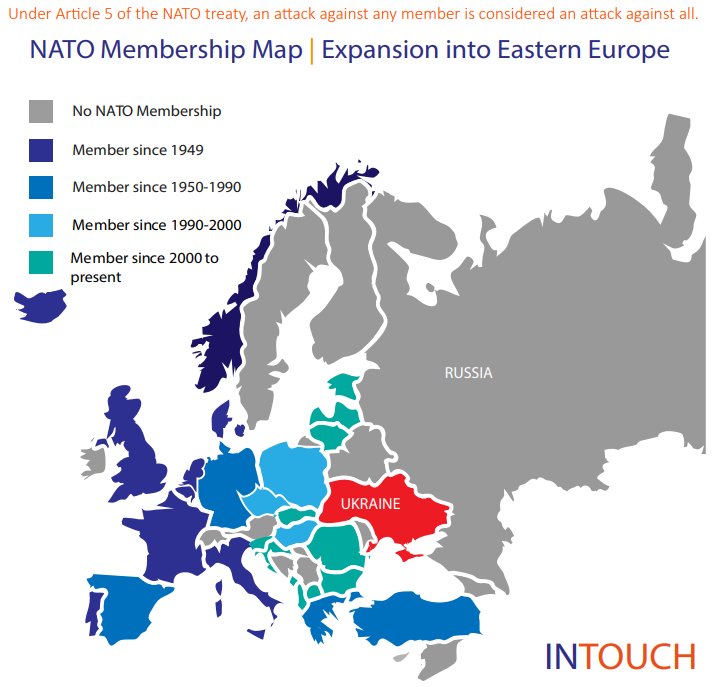