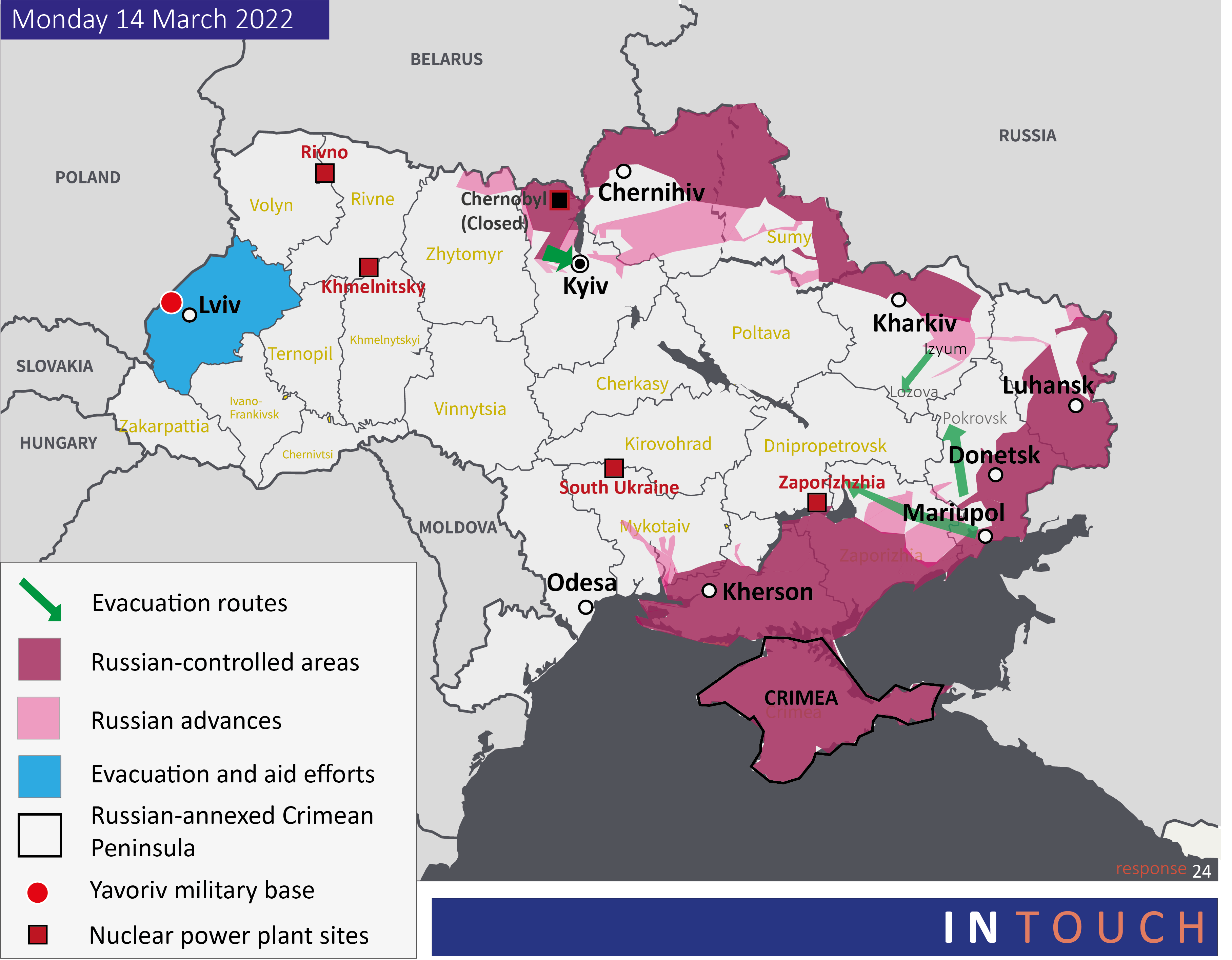 Despite reports of constructive progress during weekend negotiations between Russian and Ukrainian representatives, the Russian military assault in Ukraine has intensified over the last few days, with high death tolls reported following strikes on military bases, residential areas, and other key infrastructure. While talks focus on establishing a ceasefire and the withdrawal of Russian troops, Russian strikes have continued to target major cities in the north-east, east, and south of the country, where humanitarian corridors have been set up on a daily basis in a bid to help civilians flee bombardment. However, new strikes have been increasingly targeting more places, including a military base near Ukraine’s border with Poland, and in the Zhytomyr region – a strategically key region for aid delivery.

At least 35 deaths have been confirmed following a Russian missile strike on a military base near Poland on Sunday. Some 2.7 million people are now estimated to have fled Ukraine since the war began – the vast majority of which (1.75 million) have fled to Poland. Poland’s deputy foreign minister, Marcin Przydacz, has claimed the attack was an attempt to intimidate and threaten NATO forces. The Yavoriv training base is located around 20km from the Polish border, near Lviv, and the attack on it is the closest major strike to a NATO member to be reported amid the war so far. In the aftermath, Ukrainian President Volodymyr Zelenskyy has warned that Russian attacks could expand to neighbouring countries and has re-iterated calls for NATO to impose a no-fly zone above Ukraine – a move which Western leaders have already said would amount to a declaration of war, risking fighting spreading throughout Europe. Meanwhile, Moscow has released a statement insisting the “special military operation” in Ukraine presents no need for UN peacekeepers to be deployed, as Russia claims to be in control of the situation.

Meanwhile, hits near the capital, Kyiv, have also been getting closer to the city centre. Strikes have hit residential areas near the capital, with at least one person killed and a dozen others wounded on Monday after a block of flats was hit in the Obolon district – just a mile out from central Kyiv. Some 63 residents were evacuated from the building, while another 15 residents have since been rescued from the rubble. An aircraft manufacturing plant near Hostomel airport on the outskirts of Kyiv has also been hit, killing two people and injuring seven others. A US journalist has also reportedly been shot dead by Russian troops amid fighting in Irpin, near Kyiv. Filmmaker and journalist Brent Renaud’s vehicle is said to have come under fire at a checkpoint on Sunday.

In the south, the besieged city of Mariupol has reported an estimated death toll of more than 2,500 residents, while many more remain trapped in the city as Russian shelling disrupts the evacuation of civilians via humanitarian corridors and fragile temporary ceasefire agreements. Mariupol officials state the city faces worsening food and water shortages and remains without power, as bodies are being piled into mass graves. Reports have also emerged of mass looting, with pharmacies being particularly badly hit as medical supplies begin to run low. The International Committee of the Red Cross (ICRC) has warned the city is on the brink of a “worst-case scenario” unless a more substantial and sustainable ceasefire agreement is reached soon to ensure evacuations and humanitarian access. On Monday, 10 humanitarian corridors have been opened, including from towns near Kyiv and in the eastern Luhansk region, where heavy fighting continues. No evacuation route has been laid out for the besieged north-eastern city of Sumy for Monday.

Elsewhere, Russian troops have cracked down on anti-occupation protests in the Russian-controlled city of Kherson, while in the city of Rivne, a missile strike has damaged a TV tower. Russian naval forces have also now cut the rest of the country off from maritime trade by taking control of most its Black Sea access points in the southern coastal region. The development will have a major impact on supply routes and the provision of humanitarian aid, which will now be almost entirely limited to land travel within Ukraine. A Ukrainian counteroffensive is said to be underway in areas surrounding the city of Kharkiv, which has seen intense fighting. Ukraine’s armed forces also claim to have conducted strikes on Russian airfields, shooting down four Russian planes over the last 24 hours.

On Monday, China responded to claims which emerged over the weekend that Russia had requested military assistance from Beijing, calling the reports false. It was claimed that Moscow had asked for military help and aid in evading global sanctions, prompting a warning from the US advising Beijing against helping the Russian war effort in Ukraine, or it would face harsh consequences. Chinese officials initially denied any knowledge of such a request, before releasing a statement calling the assertions “malicious” falsehoods and “disinformation”. The development comes as Russia and Ukraine have met for a fourth round of high-level talks on Monday. It’s understood both sides have laid out their positions and have expressed willingness to engage in further negotiations, although core differences in political goals continue to present an obstacle to a lasting ceasefire which could see the war end.