The Rise of A New Era 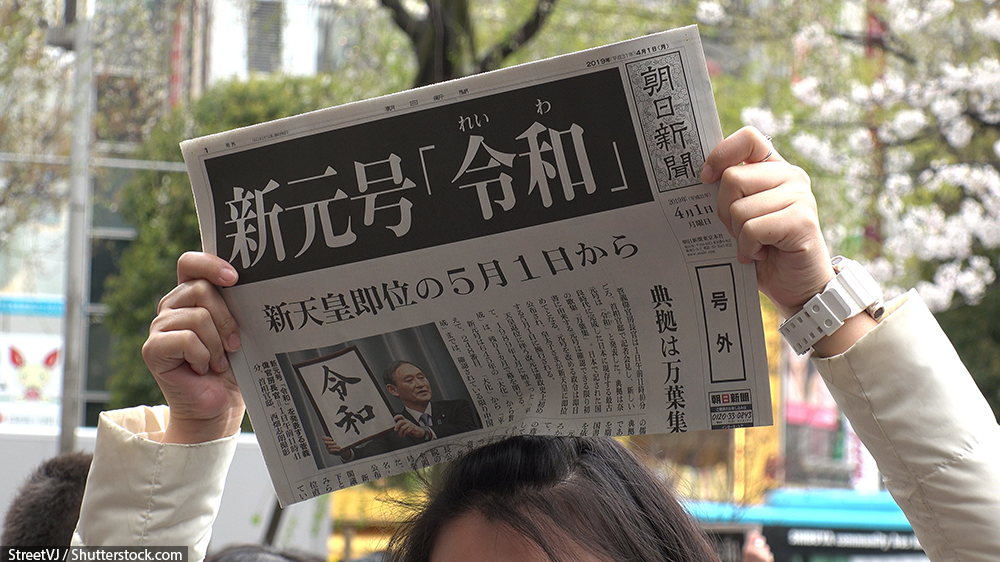 A new imperial era has begun in Japan, following a historic abdication. The previous era, Heisei, came to an end at midnight on Wednesday morning – marking the start of the new Reiwa era as the crown prince ascended the Chrysanthemum Throne.

Japan’s new sovereign, Emperor Naruhito, officially began his reign on Wednesday in a symbolic ceremony at the Imperial Palace, succeeding his father, Akihito – who will now be known as Emperor Emerius. The 85-year-old was granted permission to abdicate in light of his age and declining health, which prevented him from fulfilling the role. Akuhito is the first Japanese emperor to abdicate in more than 200 years, making for an unusual start to the Reiwa era, in that the public knew what the next era would be called in advance. The beginning of a new imperial era in Japan is typically brought about by the death of an emperor; however, with no mourning period, the abdication has been treated as a festivity in Japan, with the annual spring holiday extended to a record 10 days this year to mark the ascension of a new emperor. In Japan, the era dictates the year according to the imperial calendar scheme. Therefore, the first four months of 2019 refer to Heisei 31, which came to an end on 30 April, with Reiwa 1 starting on 01 May 2019. Working alongside the Gregorian calendar, Reiwa 2 will start on 01 January 2020.

The official translation of the name 'Reiwa' is ‘beautiful harmony’. The two-character term can be further broken down, with Rei meaning ‘commands’ or 'order', as well as ‘auspicious’ or ‘good’, while Wa can mean 'peace' or 'harmony'. Unlike previous eras, the new era's name has been taken from an old anthology of Japanese poems, instead of a Chinese one. The decision to refer to a Japanese text is seen as an attempt by Prime Minister Shinzo Abe to please his conservative Japanese supporters. The meaning behind a new era’s name is highly significant in Japanese culture because it sets the tone for upcoming decades. In his first public address as emperor on Wednesday, Naruhito recognised the burden his father bore and the responsibilities of the role as he pledged to fulfil his role as a "symbol of the state and unity” and to “bear in mind the path trodden by past emperors”.

Well-loved by the Japanese public, Akihito endeared himself to many during his reign and is attributed with opening up the monarchy to bring the Imperial family closer to the Japanese people. Emperor Naruhito paid tribute to his father’s compassion in his address, vowing to follow the same course of devotion to his people. The Chrysanthemum Throne represents the world’s oldest continuing hereditary monarchy, believed to date back as far as 660 BC. Once considered a divine leader, the modern emperor is categorised as a constitutional monarch, holding no real executive power. Although the role of emperor is now entirely ceremonial, with the constitution closely defining its function to serve as a representative symbol of state, the Japanese monarchy is still held in high regard by the Japanese public. The new emperor and his wife Masako Owada, a former diplomat, are expected to have a more modern outlook, suggesting potential changes within the structure and role of the imperial family as Japan enters its new era.

One topic of change which could re-emerge might be the issue of women inheriting the throne. Under current law, only male heirs are allowed to succeed – thereby preventing Emperor Naruhito’s only child, Princess Aiko, from ascending the throne. Instead, Naruhito’s younger brother, Prince Fumihito is second in line to the throne, followed by his son Prince Hisahito. The Japanese government were prepared to consider revising the law in the early 2000s to allow for an empress; however, the revision was shelved after Prince Hisahito was born in 2006 – providing a male heir to preserve the hereditary line of succession. The pressure on Naruhito’s wife to produce a male heir, along with the strain of imperial life, led to her developing stress-related “adjustment disorder”, and she is said to have suffered from depression and anxiety as a result. The couple took an active role in raising Princess Aiko and Naruhito has been his wife’s strongest advocate, defending her against criticism that she has at times neglected her imperial duties. The Emperor’s strong family values are something he has carried forward from his own upbringing, which strayed from traditional imperial practice. Gradually breaking from outdated traditions and making the imperial family more relatable endeared Naruhito’s father to the Japanese people and is likely to do the same for the new emperor. Although the emperor is constitutionally barred from making political statements, there is a certain pressure on Naruhito to continue to push for change to keep the imperial dynasty up with modern times.