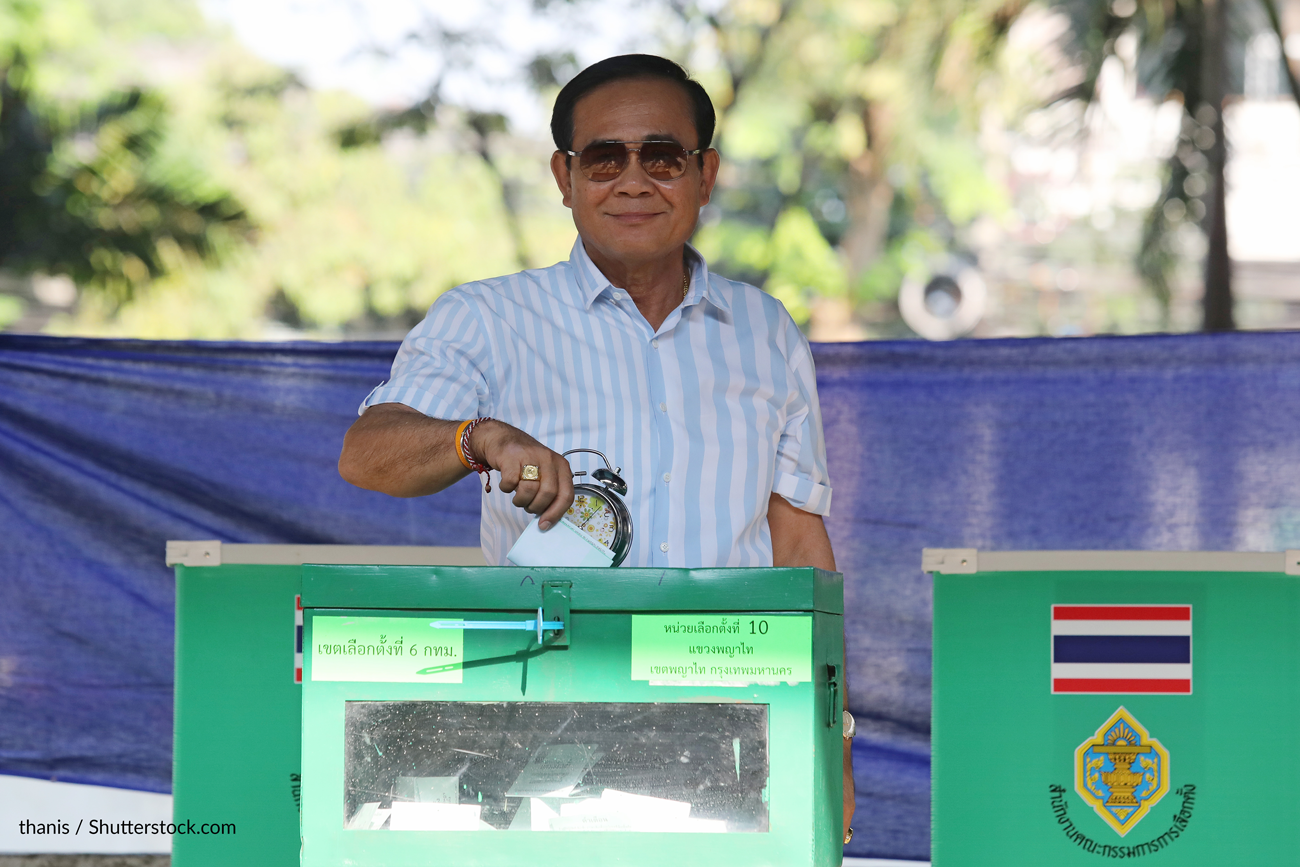 Sunday’s election was supposed to mark Thailand’s return to democracy after the military took power in a 2014 coup; however, the full results of the highly-anticipated and long-delayed election have been postponed, spreading confusion as political turmoil breaks out over contested results.

With 94 percent of the votes counted on Sunday evening, the pro-military Palang Pracha Rath Party (PPRP) was leading the popular vote with 7.6m. The opposing Pheu Thai party – linked to ex PM Thaksin Shinawatra – had approximately 7.1m votes. However, in a confusing turn of events, it appears that Pheu Thai may have won more seats overall. The Election Commission delayed a final results announcement with no explanation, stating there will be no official results until Thursday 09 May. Parties are expected to launch negotiations in the interim as they try to arrange coalitions, with parties against the military junta already banding together. The situation has prompted many to question discrepancies in the election, including published turnout figures, voter counts, and what appear to be contradicting results.

Officials have claimed human error may have played a role in the confusion; however, many critics have pushed back, suggesting instead the military government rigged the election in support of the PPRP. It’s been reported that the PPRP’s proportion of the vote jumped suddenly from third to first place in some constituencies, arousing suspicion. If the election was rigged, it would be especially damning for the EC – an institution dedicated to upholding the country’s democratic electoral standards. The EC was appointed by the junta-appointed National Legislative Assembly and has been accused of bias and incompetency, with calls for the institution to be dissolved.

The new constitution was drafted and introduced by the military junta in 2017, in a move which many have criticized as being motivated by self-interest. Among the changes brought in included a new voting system, a new selection process for the role of PM, and changes to constituency boundaries. The number of constituencies was reduced from 400 to 350, with new district boundaries drawn up by the EC in 2018 following a controversial delay. The Pheu Thai and Democrat parties accused the military junta of gerrymandering, having re-drawn constituency boundaries in such a way to better distribute areas expected to support the PPRP. Broadly speaking, the PPRP enjoys more support amongst the urban middle class and upper class, while the opposition parties are more widely supported in poorer rural areas, with Thaksin Shinawatra rising to power in 2001 by mobilising these very areas. The former PM now lives in self-imposed exile, but voiced concerns that the election had been tainted by irregularities and inconsistencies. The election was the country’s first since the 2014 military coup which removed Thaksin’s sister, Yingluck Shinawatra, from power.

The military junta made it impossible for any party found to be linked to the former PM to run in the election race, barring Thaksin’s name and image from the campaign altogether. The loyalist Pheu Thai party is unofficially associated with Thaksin and has widespread support in rural areas as a result. The Pheu Thai party is the third incarnation of Thaksin’s original political party, Thai Rak Thai, which was dissolved after he was ousted from power by the 2006 military coup. Following that, Thaksin assisted in the founding of the People’s Power party as a replacement, which held power again for a couple of years before being made defunct in 2008. By 2011, the Pheu Thai party had been formed and was led by Thaksin’s sister until 2014. Since then, the military junta has held power, with conservative backers working hard to purge Thaksin from Thai politics to little avail. According to the results published so far, Pheu Thai has only won half the votes it secured in the 2011 election and far fewer seats - hardly reflective of the widespread support amongst the electorate for Thaksin.

While it remains unclear if the election was rigged or not, it’s no secret that the entire electoral system was heavily weighted to favour the pro-military PPRP. The Asian Network for Free Elections noted that the electoral system was undeniably tilted to benefit the junta, with 2017 constitutional reforms, constituency border boundary changes, and a new vote-counting process all designed to retain the military’s power. That - combined with a poor effort to educate the electorate and heavy restrictions on opposing parties - means the election can’t be described as free and fair and was indisputably deeply flawed. The new counting process lacked transparency and arguably contributed towards much of the confusion, while there have also been allegations of vote-buying in the Northern and Central regions, with the EC allegedly turning a blind eye. Issues were also recorded with many overseas votes, with at least 1,500 ballots from New Zealand not included in the vote count after an air cargo mix up meant they couldn’t be counted by the deadline.

Pheu Thai is only one of many anti-junta political parties which competed in the election. Out of the 77 parties which campaigned, only 14 have managed to secure seats in parliament so far. Of these 14, at least eight are against the military retaining power, with talks underway for possible coalitions and alliances. In recent years, many anti-junta parties have been forcibly dissolved under the constitution, including the predecessors of Pheu Thai and the Bhumjaithai Party. More recently, the Thaksin-allied Thai Raksa Chart Party was dissolved for violating the constitution last month when they announced Princess Ubol Ratana as their candidate for prime minister. In a military-ruled country with the public fiercely loyal to the royal family, the move threatened political chaos. The princess’ unprecedented bid for political power broke with the royal tradition of staying out of politics and was ultimately denounced by her brother, King Vajiralongkorn. In an emergency royal decree, the King opposed his sister’s candidacy, describing it as ‘unconstitutional’. The EC stated that they had decided to honour the King's opposition, disqualifying the princess from running for PM and dissolving Thai Raksa Chart. Had the party been allowed to run, it could have contributed significantly to efforts amongst opposition parties to get rid of the military from power.

On Wednesday, it was announced that opposition parties, led by Pheu Thai, had formed a seven-party alliance, demanding that the military junta step aside. The opposition 'democratic front' claims to have won a majority in the 500-seat lower house of parliament following the recent election, entitling the alliance to form a government. Despite holding the majority of parliamentary seats, the alliance would not be able to elect a prime minister due to restrictions written into the constitution by the military junta, which require backing from a majority of upper and lower houses combined. The 250-member upper house of parliament is entirely appointed by the junta and, when the time comes, is expected to support the PPRP’s candidate for PM. In theory, a PM from a Thaksin-aligned party at this stage is highly improbable, as it would require at least a 75 percent majority in the lower house to outweigh the upper house. As it stands, the opposition alliance would control a 51 percent majority in the lower house. If the political gridlock continues, tensions are increasingly likely to turn into civil unrest on the streets of Thailand, which could lead to potentially violent clashes with the security forces.