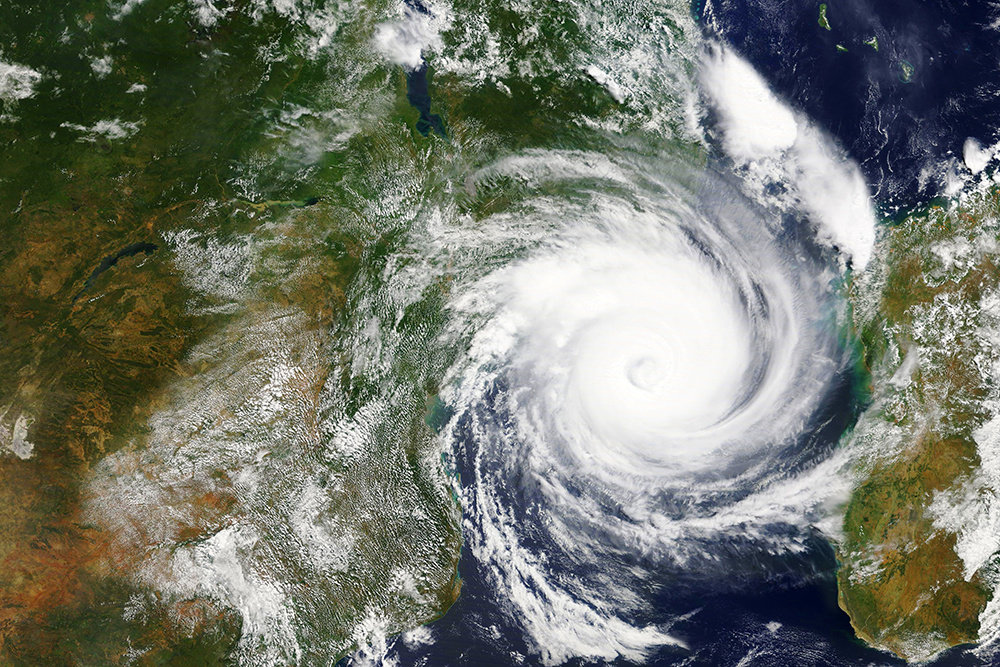 President Filipe Nyusi declared three days of national mourning on Tuesday as the scale of the destruction caused by Cyclone Idai became clear. More than 350 people are confirmed dead, and the death toll is expected to rise significantly over the coming days. Meanwhile, the UN has stated that the storm was one of the worst weather-related disasters to ever hit the southern hemisphere, adding that millions of people could be impacted across the region.

The storm made landfall last Thursday in the city of Beira in Sofala province with winds of 177kph and causing torrential rain. Buildings, bridges and powerlines were destroyed and most of the city was submerged by floodwater. The Buzi river burst its banks and a dam collapsed, cutting Beira off completely and leaving people stranded in trees and on rooftops. When the first aid teams from the International Federation of Red Cross and Red Crescent Societies (IFRC) reached the scene, they estimated that 90 percent of the city - home to more than half a million people - had been destroyed. This week satellite images showed a body of water measuring 125km by 25km surrounding Beira.

The humanitarian crisis is likely to be the worst in Mozambique’s history. Hundreds of thousands of people are homeless and aid teams are struggling to reach many rural areas. The environment minister, Celso Correia, said on Thursday that 15,000 people still need to be rescued in Beira, adding that the biggest fight is against the clock. Multiple agencies, including the World Food Programme and Red Cross, are using boats and helicopters to deliver food and medical supplies to those affected. However, the scale of the area is making the operation extremely difficult and the region has been hit by further rainfall this week, with more forecast over the coming days. The National Meteorological Institute in Mozambique has issued warnings that a further 75mm of rain could fall over the next 24 hours. There are already fears over the increased risk of water-borne diseases such as typhoid and cholera, especially in areas where supplies of drinking water have been cut. “Waterborne diseases can increase in the aftermath of a disaster such as this due to the contamination of the water supply and disruption of usual water treatment. Outbreaks of viral gastroenteritis, hepatitis, cholera and other diseases could follow as a result,” said James LeSueur from the IFRC.

There had already been torrential rain across southern Africa earlier in the week as Idai moved up through the Mozambique Channel, causing flooding which had killed more than 100 people across Mozambique, Malawi and Zimbabwe. After hitting Beira, the storm moved west into the eastern and southern parts of Zimbabwe. Around 200,000 were affected in the Chimanimani district and the government said at least 98 people have died. President Emmerson Mnangagwa cut short a state visit to the UAE and declared a state of disaster in the affected areas. He also praised citizens for their help in the relief effort. “I am deeply moved by the generosity & love shown in recent days. The sheer weight of donations has been overwhelming & provided comfort & assistance to those in need,” said Mnangagwa on Twitter. In neighbouring Malawi 56 deaths have been confirmed and President Peter Mutharika declared a state of disaster in the southern Nsanje district, where around 11,000 people have been displaced by flooding.

The devastating impact of Idai has already prompted much discussion about the impact of climate change. “Cyclone Idai is a clear demonstration of the exposure and vulnerability of many low-lying cities and towns to sea-level rise as the impact of climate change continues to influence and disrupt normal weather patterns”, said Mami Mizutori, UN Special Representative for Disaster Risk Reduction (UNISDR). Researchers at the Geophysical Fluid Dynamics Laboratory (GFDL) said the high number of major hurricanes and cyclones over recent years (Irma, Maria, Harvey, Michael, Haiyan) were caused by warmer sea temperatures, adding that the trend for more frequent and more powerful storms is likely to continue. “Tropical cyclone rainfall rates will likely increase in the future due to anthropogenic warming and accompanying increase in atmospheric moisture content. Modelling studies on average project an increase on the order of 10-15 percent for rainfall rates averaged within about 100km of the storm for a 2-degree Celsius global warming scenario,” said the GFDL. Idai has shown that regions without effective early warning systems and resilient infrastructure are extremely vulnerable when tropical weather systems hit. If they become more common, and more intense, then poorer communities will remain stuck in a cycle of disaster-response-recovery.