The People vs Omar al-Bashir 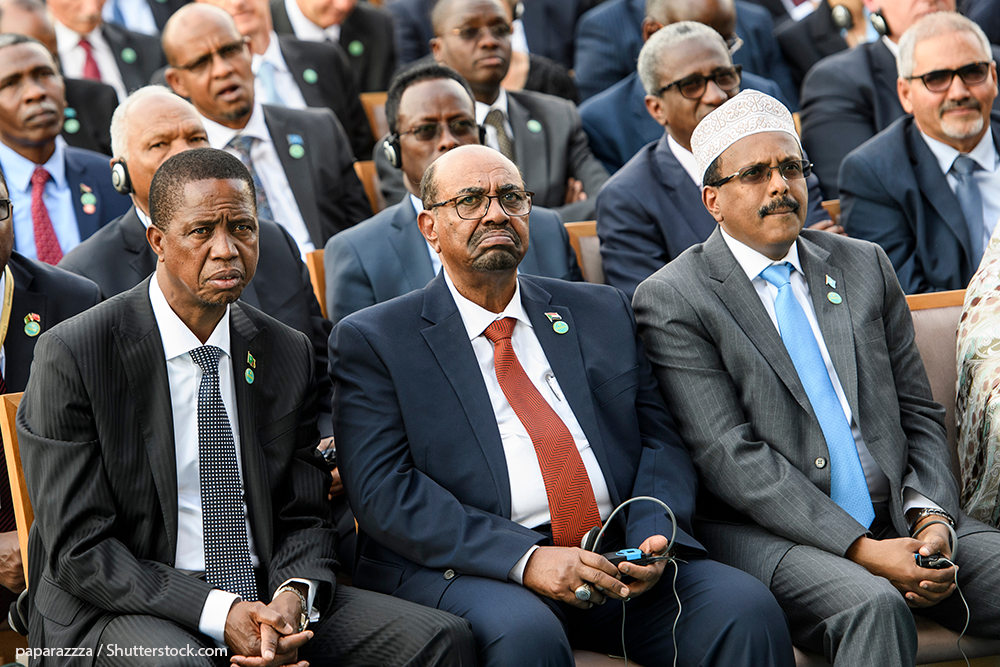 The latest wave of protests began in the town of Atbara and were initially focused on public anger at the country’s poor economic conditions, including high inflation and the rising costs of basic goods; however, the scale of the unrest has grown, and people are now demanding that President Omar al-Bashir steps down from office. Rallies have been held across the country, including in the capital Khartoum and the neighbouring city of Omdurman, and the protests are the most sustained in the country’s recent history.

More than 40 people have been killed so far, according to activists, with most of the deaths attributed to the security forces, who have fired tear gas and live rounds to disperse large crowds. The government has refuted the allegations that troops are responsible for the deaths, instead claiming that protesters were killing each other in order to blame the regime. Bashir also said the protesters were “traitors” who had been influenced by foreign powers who are trying to destabilise the country. The government declared a state of emergency and restricted access to the internet, foreign journalists have had their accreditation removed and the security forces have arrested hundreds of people. So far these methods, which have been used during previous periods of unrest, have failed to stop the momentum of the demonstrations. Bashir has offered no significant concessions to the protesters and there are no signs that he is willing to step down from office.

The government has lost touch with the Sudanese people, a country with a median age of just 19. Sudan’s economy has been badly damaged by years of corruption and a system of patronage, which has been built to keep Bashir and his allies in power. The kleptocracy has developed since Bashir took office during a bloodless coup in 1989. He has overseen a brutal war in the Darfur region which began in 2013, and for which he has been accused of committing war crimes. In 2008 he became the first state leader still in office to be investigated by the International Criminal Court (ICC), which then issued warrants for his arrest in 2009 and 2010. The charges against him include five counts of crimes against humanity and three counts of genocide. He has also seen his country splinter with the creation of South Sudan as an independent state in 2011. This new neighbour took 75 percent of Sudan’s new oil reserves with it, resulting in a huge fall in revenue and foreign currency.

Bashir’s government has a long history of using brutal force against the Sudanese people. The US State Department published a human rights report in 2017 which documented numerous allegations against the president. These included the use of arbitrary arrests and extrajudicial killings, a failure to hold credible elections, attacks against opposition political groups, suppression of the media and any forms of public dissent. The government has also been accused of failing to investigate human rights abuses, including those committed during previous periods of civil unrest. The security forces, including the National Intelligence and Security Service (NISS), have been allowed to act with impunity and have regularly targeted groups who they deem to be a threat to the government. Earlier this month the NISS arrested dozens of journalists after the organised a peaceful sit-in over the clampdown against the media. Reporters Without Border (RSF) condemned the ongoing attacks on the media in Sudan, a country ranked 174th out of 180 in RSF’s World Press Freedom Index last year.

At this stage, it is difficult to see how Bashir will placate the protesters. The last sustained protests, which took place in 2011 during the Arab Spring, left more than 200 people dead. In February of that year Bashir announced that he wouldn’t run again in 2015, but later reneged on that promise and won a discredited election which was boycotted by the opposition. Earlier this week he flew to Doha to meet with Emir Sheikh Tamim bin Hamad Al Thani, who voiced his support for Bashir’s rule. It is not yet clear whether the Qataris will offer any financial packages to ease Sudan’s economic crisis. Russia and Turkey are reported to have offered aid to help prop up the government, while the UAE has provided additional economic aid. Bashir has already abandoned his alliance with Iran and deployed 14,000 troops to Yemen to fight alongside the Saudi-led coalition against the Houthis, primarily to strengthen relations with Riyadh and receive investment (estimated to be worth $2.2bn).

For the people of Sudan, it is equally difficult to see how they will topple the government. While there has been some condemnation of the government’s crackdown against protesters, including from the US State Department, no sanctions have been enforced on the Sudanese government and the overall reaction has been muted. The political opposition is weak and divided, although this has opened up space for various grass-roots groups to emerge, such as the Sudanese Professionals Association. Public dissatisfaction has spread to all areas of society and even loyalist regions have joined the revolt. There are no signs that the security forces are ready to turn on the government and force him out, although clashes between the army and the NISS in Port Sudan on Wednesday night might expose wider tensions between the two groups.