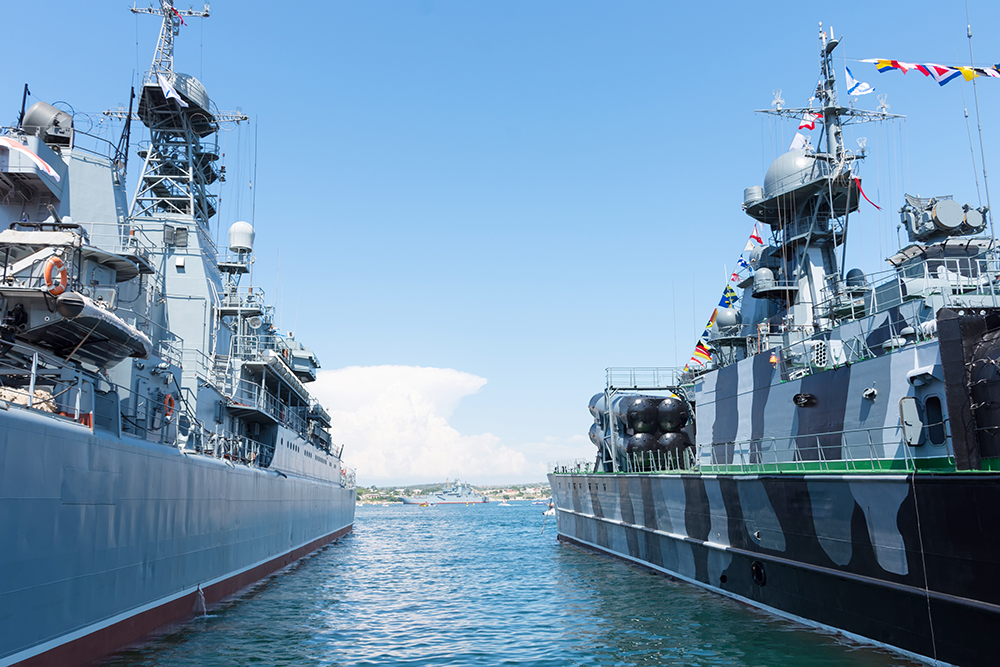 President Petro Poroshenko has signed a decree to implement martial law in 10 out of 27 oblasts in Ukraine. The decree was overwhelmingly approved by the Ukrainian parliament, the Verkhovna Rada, and is set to last for 30 days. Martial law was proposed after an altercation involving the Russian military and the Ukrainian Navy in the Kerch Strait, located in the Azov Sea in eastern Ukraine. Tensions in the region remain high over the eastern Ukraine conflict, which broke out after Russia annexed Crimea in 2014. The further escalation came after a massive bridge was built over the strait to connect Crimea to mainland Russia. According to a 2003 treaty signed between Russia and Ukraine, both countries are allowed to patrol the strait’s waters. However, a potential military escalation in the eastern Ukrainian conflict came after Russia’s Federal Security Service (FSB) seized three Ukrainian Navy vessels and detained more than two dozen crew members. Ukrainian authorities confirmed that there were counter-intelligence officers of the Security Service of Ukraine (SBU) amongst the sailors detained.

The declaration of martial law in Ukraine includes the regions of Vinnytsia, Mykolayiv, Odesa, Kherson, Zaporizhzhia, Donetsk, Luhansk, Kharkiv, Sumy, and Cherchiv. They are mainly located near the Russian border and along the coastal areas of the Black Sea and the Azov Sea. As well as all oblasts in eastern Ukraine, the implementation of martial law extends to the Moldovan border, where Russian troops are stationed in the breakaway region of Transnistria. Ukraine’s Constitution predicts in Article 106, regarding emergency provisions, that the president may adopt “a decision in accordance with the law on the general or partial mobilisation and the introduction of martial law in Ukraine or in its particular areas, in the event of a threat of aggression, danger to the state independence of Ukraine”. Provisions for the emergency measures were adopted back in 2015, nearly a year after the Crimean annexation by Russia. That year, Ukraine’s Rada passed the so-called ‘On the Legal Status of Martial Law’ bill, which allows the government to restrict certain rights, freedoms, and legal guarantees to individuals and companies. It further allows the government to restrict demonstrations, referendums, and calls for elections. Despite the wide scope of the legislation, the government may include or exclude certain specific aspects that the martial law may affect. The measure could also impact local elections, which are scheduled to occur in late-December, just days before the law expires.

President Poroshenko claims that “martial law does not mean a declaration of war. Ukraine has no plans to go to war with anyone. (It) is introduced exclusively for the purposes of defence, protection of the Ukrainian land, our territorial integrity, our country's sovereignty, and independence”. One of the main concerns regarding martial law is a potential Russian invasion of Ukraine’s eastern front, which has been engulfed in a long conflict between the Ukrainian military and pro-Russian separatists in Donetsk and Luhansk, in the so-called Donbas region. In early-2018, the Rada approved a bill to redefine the borders of the region, while clearly identifying Russia as an aggressor state.

President Vladimir Putin has claimed that his Ukrainian counterpart has launched a campaign of provocation against Russia, while the same sentiment was reiterated by his foreign minister, Sergei Lavrov. Russia claims that President Poroshenko is increasingly attempting to politically target Russia as part of his campaign to gain support ahead of the presidential elections in March 2019, when he is up for re-election. Poroshenko’s popularity remains low, mainly due to having handled the eastern Ukrainian conflict poorly, while also failing to address the country’s economic crisis - which in recent months forced the intervention of the International Monetary Fund (IMF). Russia has vowed to counter the Ukrainian aggression, over allegations that its sovereignty was violated.

Meanwhile, President Poroshenko called on NATO to relocate its ships in the region to assist Ukrainian forces in case of a potential escalation in the conflict. NATO Secretary General Jens Stoltenberg said in a press conference that “Russia has to understand that there are consequences for its actions”. Regarding the eastern Ukraine conflict and Crimea, Stoltenberg reiterated that the issue was repeatedly brought to the table in the NATO-Russia Council (NRC), while NATO considers that “Russia's construction and partial opening of the Kerch Strait bridge represents another violation of Ukraine's sovereignty and territorial integrity”. Stoltenberg said that NATO recently increased its presence in the Black Sea to assist member states and close partners, such as Ukraine and Georgia – the latter of which is closely monitoring the incident as President-elect Salome Zurabishvili prepares for her inauguration next month.

Recent reports revealed a large military mobilisation of Russian troops in Crimea, which included the suspected deployment of additional S-400 surface-to-air missile systems, which are set to become operational in late-2018. Ukraine Infrastructure Minister Volodymyr Omelyan has said that dozens of Ukrainian commercial vessels were prevented from docking in the ports of Mariupol and Berdyansk. Omelyan said that they are being barred as Russia is intensifying its blockade in the Kerch Strait. Since the Crimean annexation, the Russian blockade on the Kerch Strait has negatively impacted trade in some eastern Ukrainian ports. As tensions linger, the international community continues to be concerned over the potential outcome of the conflict. The Kerch Strait crisis is set to become a hot topic as world leaders - including US President Donald Trump and President Putin - head to Buenos Aires in Argentina to attend the G20 summit.