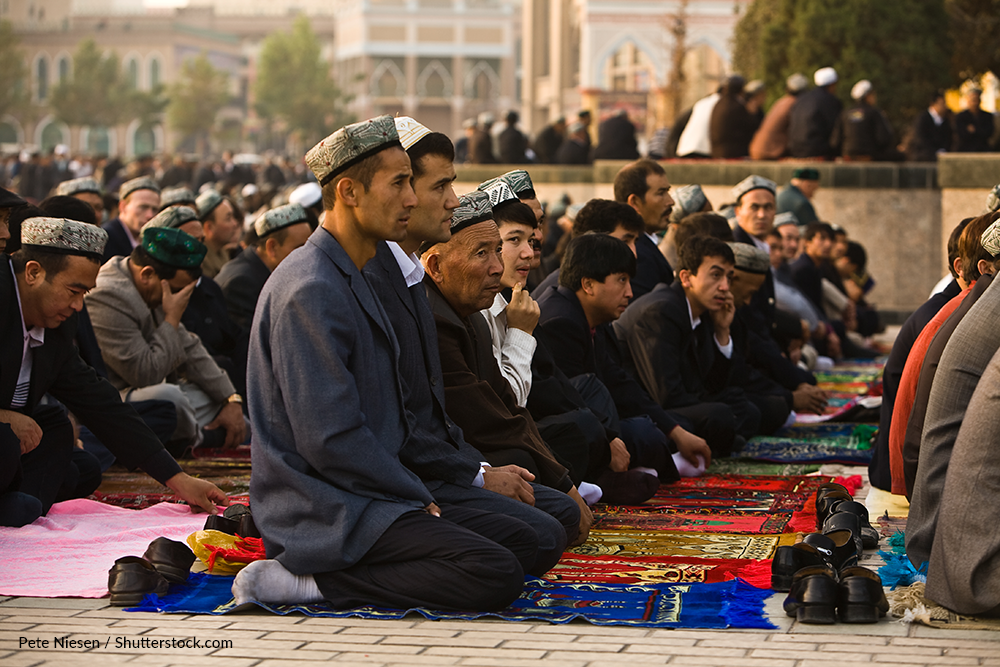 For the last six decades, a violent separatist conflict has been ongoing in China’s far-western autonomous region of Xinjiang. Tensions between the ethnic Uighur Muslims and the Chinese Han communities have long permeated the region, leading to social instability, civil unrest, and terrorist attacks. The Chinese state police have been rumoured to routinely curtail the religious activity of Uighur Muslims, building ‘re-education’ centres to suppress their culture. The extent of the suppression has come to light in recent years, with recent external investigations suggesting as many as a million people may be being held in so-called internment camps.

The Xinjiang region is mostly covered with uninhabitable deserts and dry grasslands, lying in-between stretches of harsh mountainous terrain. Just less than 10 percent of land in the region is habitable. In recent years, what had previously been an untouched expanse of dry desert area just outside of Dabancheng, has been transformed into a high-security compound with guard towers, barbed-wire fencing, and a thick exterior wall – much like a prison. In the context of reports claiming China was placing Uighur Muslims in detention camps, the structure was suddenly hauntingly reminiscent of darker times.

Calls for independence and the wealth generated by the region’s oil and gas reserves has led to the Chinese authorities cracking down on separatism and launching suppressive strategies to strengthen China’s claim to the area. State interest in the region brought about the state-sponsored migration of Han Chinese settlers, now the second biggest ethnic group in Xinjiang after the Uighurs – leading to ethnic violence and a heavy-handed police response. Regional terrorism is mainly driven by a desire for independence amongst the Uighurs and control over the area’s population. In August 2008, two suspected Uighur separatists killed 16 police officers in the city of Kashgar when they drove a truck into a group of 70 police officers before attacking them with machetes and grenades. Violent separatist attacks have since intensified in response to China’s aggressive interventionist strategy. In 2013, two pedestrians were killed, and 38 others were wounded when three suspected separatist Uighur militants drove their vehicle at pedestrians in Tiananmen Square, Beijing. The following year, a group of eight knife-wielding attackers killed 31 civilians and wounded 143 others at Kunming Railway Station, in what the government claimed was a terrorist attack motivated by Xinjiang separatism.

The violent terrorism of the last few years has arguably worsened the situation and provided the government with justifiable cause to ‘re-educate’ so-called extremists. In retaliation to these attacks, the Chinese state has enforced some of its most restrictive monitoring technology in Xinjiang – including facial recognition surveillance, monitoring mobile phone content, and the mass collection of biometric data. Separatist terrorism has become a label which the state has attached to the entire Uighur Muslim population, rather than just a handful of extremists. Unfortunately, this view has been consolidated by the activity of internationally recognised terrorist groups – such as the East Turkestan Independence Movement (ETIM) and Turkistan Islamic Party (TIP), thought to have links to Al-Qaeda – and reports of hundreds of Uighurs travelling to fight with the Islamic State (IS) in Syria. A state propaganda campaign against the Uighurs has meant that ethnic profiling has become commonplace in Xinjiang, as they are treated with widespread suspicion for supposedly being more loyal to their religion than to their country.

The first mentions of de-radicalisation campaigns emerged in the region back in 2012, when Imams and extremists were allegedly educated on the ideals of Chinese society. Over the next few years, these campaigns escalated into a full-blown war on Uighur terrorism. It’s believed hundreds of thousands of Uighur Muslims have been locked up without trial as a result of the campaign; however, China has firmly denied this – claiming occupants are there willingly to re-educate themselves against religious extremism. The implication here is that the religion of Islam is inherently extremist and that followers of the religion must be gathered en masse and brainwashed into converting to the Chinese culture. Officially, the so-called re-education schools are there to help those who have ‘problems with their thoughts’ – forcing them to acknowledge their mistakes while a relentless propaganda campaign dresses the operation up as mass social rehabilitation. State-run media campaigns show spacious classrooms full of happy students – an image thought to be a far from accurate portrayal. Reports indicate the ‘schools’ have become feared amongst the dwindling Uighur population outside of the camps, as the Chinese state exercises almost absolute societal control.

First-hand accounts of life inside the camps hint at the mundane reasons people were detained – such as: having relatives living abroad; reciting Islamic verses or for failing to pay a bill on time. Those inside are said to be forced to recite chants and slogans in Chinese, giving thanks and praising China’s leader Xi Jinping as if he were a religious figure. Unconfirmed reports also claim Muslims are forced to eat pork and drink alcohol – both of which are forbidden according to Islamic scripture. Uighurs are reportedly routinely prevented from practising Islam outside of the camps as well, with Islamic sounding names, long beards, headscarves and veils banned. The foundations of Uighur culture are systematically being broken down, as China further asserts its dominance in the region. Allegations of abuse are ignored by the Chinese government, which maintains its stance that the facilities are voluntary re-education schools. The government has also failed to address the alarmingly fast rate at which most of the 101 documented facilities have been either built from scratch or developed into a compound up to six times the previous size within just a few years. Many of these facilities could house at least 11,000 detainees – placing them amongst some of the biggest prisons in the world.

Not all Uighurs have been detained and many maintain high-level positions in local government. While some have likened the systematic ethnic rehabilitation to Nazi Germany or Apartheid, a more accurate comparison would be to that of Mao Zedong’s Cultural Revolution – a socio-political initiative enforced in China between 1966 and 1976 which purged traditionalists and Mao’s political opponents from society. The movement saw entire groups of society forced to re-align themselves with the Communist Party’s social and political values or face persecution. In another article published by InTouch in March 2018 (To Xi or Not to Xi) we looked at Xi Jinping’s strengthening grip on Chinese society by purging corrupt politicians and his apparent aspirations to become a modern-day Mao Zedong. If Mao’s Cultural Revolution is anything to go by, the forced re-education of the Uighurs could become another key moment in the country’s history marking a severe setback, to be condemned by Xi’s successor in years to come.