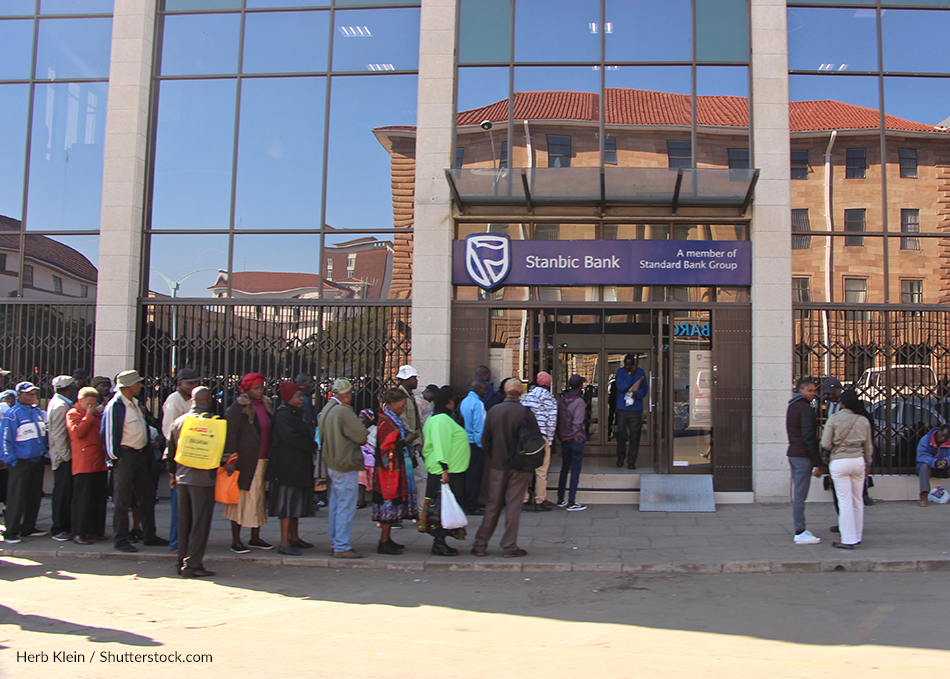 It has almost been 12 months since President Robert Mugabe was forced out of office in a military coup and replaced by his former ally, Emmerson Mnangagwa. The country held general elections in July, with Mnangagwa’s ZANU-PF narrowly defeating Nelson Chamisa and the MDC Alliance to secure a five-year term. During the campaign, the president promoted himself as a business-friendly leader who would secure foreign investment and restore the country’s economy, which was savaged under his predecessor. However, a major foreign currency shortage forced shops and businesses to close this month and there are fears that Zimbabwe could be heading towards another major crisis.

The most immediate challenge facing the government is the complex currency system which has been in place since the local currency, the Zimbabwean dollar, was scrapped when the economy went into hyperinflation a decade ago. The ZWL was fully demonetised in 2015 and has been replaced by a combination of regional (SA Rand, Botswana pula) and international (US dollar, Chinese yuan, euro etc.) currencies. To further complicate matters, bond notes and electronic money backed by USD were also introduced in 2016, but both trade well below parity (earlier this month bond notes were worth around $0.20). During a meeting in London, Finance Minister Mthuli Ncube said: “The market has said these currencies are not at par. I don’t want to argue with the market. The bond notes will, at some point, have to be demonetised.” The statement immediately raised fears savings would be decimated through devaluation, as occurred during the last major crisis in 2007 and 2008.

In a press conference on Tuesday Chamisa also called on the government to abolish the bond notes completely, while Acie Mutumanje Lumumba was appointed as the chairman of a communications task force in the Finance and Economic Development ministry and then sacked three days later. During his brief tenure he accused four directors at the Reserve Bank of Zimbabwe (RBZ) of releasing bond notes on to the black market. Mutumanje also claimed that the Singapore-registered company Trafigura was running a fuel cartel in the country. Around 70 percent of foreign currency allocations at the RBZ are spent on fuel and Trafigura have been accused of manipulating prices, which are higher in Zimbabwe than in neighbouring countries.

The situation became international news earlier this month when local branches of KFC said they were forced to close due to a shortage of US dollars, which are required to buy stock from suppliers. The foreign currency crisis has also led to pharmacies running out of medication and there have been fuel shortages across the country. These shortages have created panic buying, so shops cannot resupply to keep up with the demand. Most countries in a similar state to Zimbabwe would go to the IMF for a bailout, but the country is already in arrears to the tune of $2.2bn. The US is also maintaining economic sanctions through the Zimbabwe Democracy and Economic Recovery Act (ZDERA), which was enacted back in 2001 and prohibits an extension to lines of credit from international organisations. The IMF said it was prepared to work with the government on a strategy to clear the debt but this will be based on fundamental economic reforms.

Alongside the economic challenges facing the government, Chamisa and the MDC Alliance are still trying to challenge the results of July’s election. In August the Constitutional Court dismissed the MDC’s bid to have the result annulled over allegations of vote rigging. "In the final analysis, the court finds the applicant has failed to place before it clear, direct, sufficient and credible evidence" of irregularities, said Chief Justice Luke Malaba in his ruling at the Constitutional Court in Harare. The dismissal had been expected, but questions remain over the validity of the result. There were discrepancies between the figures issued by the Zimbabwe Electoral Commission (ZEC), including voter turnout above 100 percent at some polling stations (2,800 votes in the Chakari constituency despite there being only 667 registered voters). Mnangagwa only won 50.8 percent of the (official) vote and narrowly avoided a second-round run off. The killing of six people during post-election violence and the grenade attack against Mnangagwa at a rally in Bulawayo also destabilised the country. Chamisa is set to hold a rally on Saturday to protest against the government and recently called for the creation of a “national transitional authority” to deal with the crisis. The lack of credibility in the election is also deterring the foreign investment that Mnangagwa was promising before the vote, with many investors waiting to see if the government has the fiscal discipline required to stabilise the economy.