The Curious Case of Jamal Khashoggi 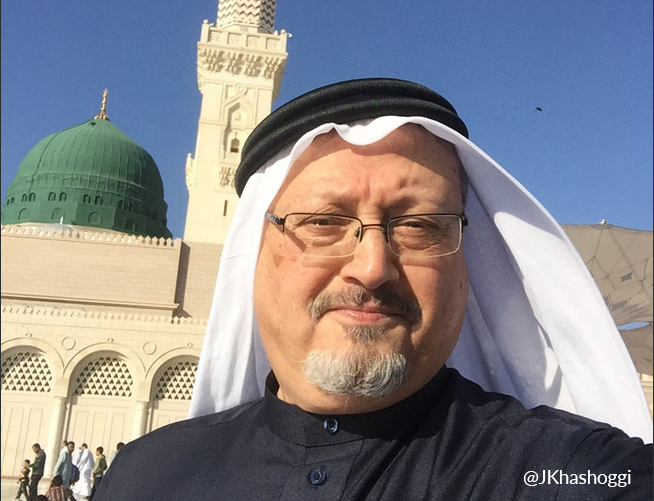 On Tuesday 2 October the journalist and political commentator Jamal Khashoggi walked into the Saudi consulate in Istanbul. He hasn't been seen since. Initial reports suggested that he had been detained and possibly flown back to Saudi Arabia; however, that now seems like a ‘best case scenario’ following speculation that he was killed and dismembered inside the consulate.

Khashoggi had been living in self-imposed exile in the US since 2017, where he contributed to various news outlets, including the Washington Post. Prior to leaving the kingdom, he had worked for various Saudi newspapers, including Al-Watan where he was editor-in-chief between 2007-2010. He also served as a senior advisor to various Saudi officials, yet in recent years he has been an increasingly vocal critic of the Saudi government, particularly the country’s military intervention in neighbouring Yemen. He left for the US after several other journalists were arrested by the Saudi authorities and he was warned to stop airing critical views on social media.

Khashoggi went to the consulate in Istanbul to collect documents relating to his divorce from his ex-wife so that he could marry his partner, Hatice Cengiz. He had visited the building on 28 September and was told to return when the papers were ready for collection. The consulate then contacted him to arrange an appointment on 2 October. Cengiz waited outside the building but her fiancee never returned, prompting her to contact the Turkish authorities.

Khashoggi’s disappearance has sparked a major diplomatic row between Saudi Arabia and Turkey. On 4 October Turkey summoned the Saudi ambassador in Ankara to the foreign ministry to explain Khashoggi’s whereabouts, while Mohammad al-Otaibi, Saudi Arabia’s consul in Istanbul, said: “I’d like to confirm the citizen Jamal is not at the consulate or in the Kingdom of Saudi Arabia.” Crown Prince Mohammed bin Salman also said the Turkish authorities were welcome to search the consulate. The Washington Post printed a blank column last Friday in solidarity with Khashoggi, which included the headline: “A missing voice.”

The story then took a darker turn. Turkish officials told the media that they believed that Khashoggi had been tortured and killed inside the building before his dismembered body was removed from the premises, a claim which the Saudis said was baseless. Yet these allegations have intensified over the course of the last week, with more evidence emerging which appears to corroborate the allegations. Yesterday Turkish security officials said they believed that the “highest levels of the royal court” in Saudi Arabia had ordered the killing. Various newspapers including the Middle East Eye (MEE), the Daily Sabah, the Washington Post and the New York Times have published reports which detail the alleged killing; including CCTV footage of Khashoggi arriving (and not leaving the consulate); local staff were told to take the afternoon off because of a high-level diplomatic team; 15 Saudis, reported to be intelligence officers (including the head of forensics for the Saudi General Intelligence Presidency), flew into Istanbul on private jets (HZSK1 and HZSK2), visited the consulate and then left the country within 24 hours. A Turkish source close to the investigation told the MEE: "We know when Jamal was killed, in which room he was killed and where the body was taken to be dismembered. If the forensic team are allowed in, they know exactly where to go." Separately the Post said US intelligence intercepts show that Crown Prince Mohammed bin Salman had earlier ordered that Khashoggi be enticed back to the kingdom so that he could be detained.

The Saudi government is coming under increasing pressure from the international community to explain what happened. Turkish President Recep Tayyip Erdogan has said that the Saudis’ explanations are not sufficient, while the UK Foreign Secretary Jeremy Hunt told the AFP: “If these allegations are true, there will be serious consequences because our friendships and our partnerships are based on shared values. We are extremely worried.” Yesterday even US President Donald Trump, a close ally of the Saudi government and somebody not renowned for his support of journalists, said he wanted to “get to the bottom of it” and described the incident as a “terrible thing.” He added that Hatice Cengiz had written to him and the First Lady Melania Trump and said plans were in place for her to travel to the White House to discuss the matter.

Unless Khashoggi is found alive, which now appears very unlikely, the implications for the Saudi government will be extremely serious. His killing would mark a new low for a regime already condemned for its poor human rights record and would increase pressure on the international community to impose sanctions on the Saudis. Trump has already expressed reluctance to consider withholding arms sales to the kingdom (a $110bn deal was agreed in his first foreign trip to Riyadh last May); however, 22 US senators have already signed a letter to the president triggering a provision of the Global Magnitsky Human Rights Accountability Act. Senator Rand Paul said he will try to force a vote blocking arms sales if there are any indications that the Saudis had killed Khashoggi. The UK government would face a similar dilemma (the value of its arms sales to Saudi Arabia are estimated at $1.13bn), but it could not fail to act so soon after leading international sanctions against the Russian government for its role in the chemical weapons attack in Salisbury, which the authorities claim was carried out by two GRU agents. The Saudi government has dismissed the allegations in much the same way that Moscow has refuted the mounting evidence that it sanctioned military officers to kill Sergei Skripal. “They were tourists” and “we don’t know where he is” are not just terrible excuses, they also show that powerful regimes believe they can kill dissidents with impunity.