The Long Road to Peace 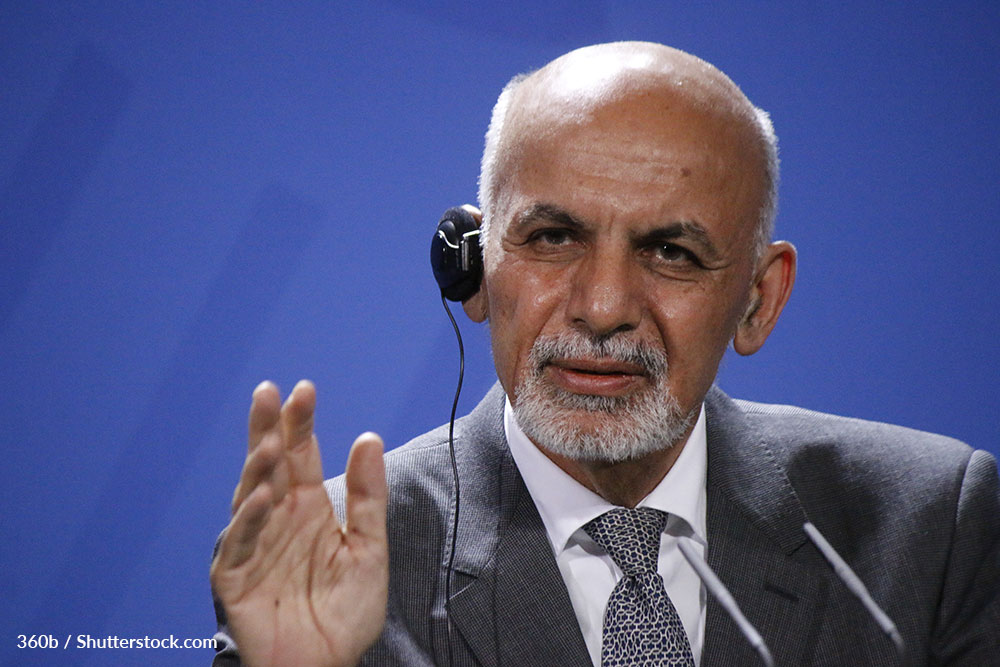 The war in Afghanistan, which has been raging on for almost 17 years, looks set to continue after recent reconciliation efforts fell through. After almost a month of hopeful speculation, the Taliban officially rejected the Afghan government’s final offer of peace talks. In June the government launched the process of negotiating deals with the Taliban, which – for a short while - tentatively engaged in the peace efforts.

During Ramadan, the government established a 10-day unilateral ceasefire in an effort to promote a peaceful environment for the celebration of Eid. President Ashraf Ghani made a statement addressing the Taliban, announcing that the government was open to peace talks. “This ceasefire is an opportunity for the Taliban to introspect that their violent campaign is not winning hearts and minds but further alienating”, said Ghani. In a rare display of non-hostility, the Taliban agreed to join the government’s peace efforts and announced a three-day ceasefire to take place over Eid to allow civilians to celebrate without fear of being caught up in an insurgent attack. It was during the Taliban’s ceasefire that insurgents, government security personnel, and civilians celebrated Eid together. IS targeted one of these gatherings in Nangarhar, killing at least 36 people. It was reported that IS had purposefully planted the bomb in one of the Taliban insurgent’s cars to raise tensions during the ceasefire.

Despite the attack, the Taliban ceasefire was largely reported as a positive event in Afghanistan, with pictures surfacing of insurgents embracing government soldiers as a sign of temporary peace. As the Taliban’s ceasefire drew to a close, the government announced they were extended their unilateral ceasefire and invited the Taliban to do the same; however, after several days, the Taliban rejected the offer and resumed offensive attacks. At the time, unconfirmed reports claimed the Taliban had made a series of requests or conditions under which peace talks could continue. One of these conditions was alleged to be one-to-one talks with the US – something unlikely to come to pass, as the US could be seen to be negotiating with terrorists if such a meeting were to take place. Furthermore, if a US state official were to meet with the Taliban leadership, it would provide the Taliban with a level of recognition on an international level. In contrast, President Ghani had said that he was prepared to meet the group’s leaders with no set preconditions and some reports even speculated over the possibility of a one-year ceasefire.

However, just three days after the Taliban ended their ceasefire, a group of insurgents carried out their first confirmed attack. As many as 30 Afghan soldiers were reportedly killed in the Badghis province. Although the government ceasefire was still in place, the security forces are under direct orders to defend themselves in the event of an insurgent attack. In the hours following the attack though, it appeared the Afghan government had managed to broker a deal with the Taliban, as it was announced that the Taliban were allowed to move freely through Kandahar province as long as insurgents weren’t carrying weapons. The Kandahar province has long been seen as the de facto home of the Taliban, as they have a strong presence and historic roots in the southern region. The deal briefly sparked hope of renewed peace talks as the government ceasefire continued.

In the days that followed, the Taliban continued to carry out attacks on the government forces and other targets– including a road construction project in the Spin Boldak district of Kandahar, where insurgents abducted 20 security guards and 13 engineers. At least four Afghan security personnel were killed in attempts to rescue the hostages. Just last week, a section of the Kabul-Kandahar highway was closed in the Wardak province after a gunfight broke out following a Taliban attack on the government forces. That same week, the Taliban announced they were rejecting calls for peace talks, confirming their position against further negotiations. The Taliban issued a statement, citing the presence of the US forces as a major issue preventing peace in Afghanistan, describing the government’s efforts for reconciliation as an ‘American conspiracy’ to strengthen what the Taliban perceives as the occupation of Afghanistan by the US. The statement was allegedly issued in response to the peace march held in Helmand by activists supporting peace talks. The Taliban has long accused the US of blocking the peace process – although the Taliban has struggled to maintain this consistency in attitude towards the Afghan government.

At times, the Taliban appear to engage positively with the government, raising hopes that serious negotiations may not be unrealistic. However, at others, the group has issued extremely critical statements condemning the Afghan government as a mere puppet of the US. In last year’s Spring Offensive, the Taliban sought to distance themselves from associating with the Afghan government,establishing administrative systems within the Taliban-controlled territory and seeking to present themselves as a viable alternative for government. This year’s Spring Offensive announcement appeared to be a continuation along that same theme, although that message has been softened by the group’s recent willingness to take part in peace talks.

Throughout the first half of this year, the Taliban has maintained a high level of activity. Whereas in previous years, insurgent activity has typically dropped during the winter months (due to weather restricting mobility), the group actually gained more territorial ground during their offensive last year and were able to establish a firmer foothold ahead of the cold months, enabling insurgents to be more active. Indeed, two major terrorist attacks were reported in Kabul in January this year –both of which were allegedly carried out by the Taliban. On 20 January, the Intercontinental Hotel in Kabul was attacked, with an estimated 42 confirmed fatalities. Just a week later, an ambulance was used to transport an improvised explosive device (IED) near Sidarat Square in central Kabul, killing over 100 people. According to data collated by Security Exchange, approximately 1,200 fatalities were recorded in around 800 security incidents in January 2018. In comparison, the number of security incidents reported in the same period of 2017 was less than half.

The general trend of insurgent attacks this year has seen more high-fatality coordinated attacks – which have been more strategically complex and require more planning. While casualty figures fell in February following two large-scale attacks in January, by March there was a noticeable increase in the number of attacks reported. In April, over 900 security incidents were recorded – the highest per month so far this year. This increase continued through to the following month when the highest number of fatalities per month was recorded for 2018, with an estimated 1,500 deaths recorded in May. It wasn’t until June, when peace efforts were launched, that the figures unilaterally dropped. As we enter the second half of the year, the Taliban are likely to continue to defend gained territory and are extremely likely to carry out more large-scale attacks in major cities, such as Kabul and Jalalabad. 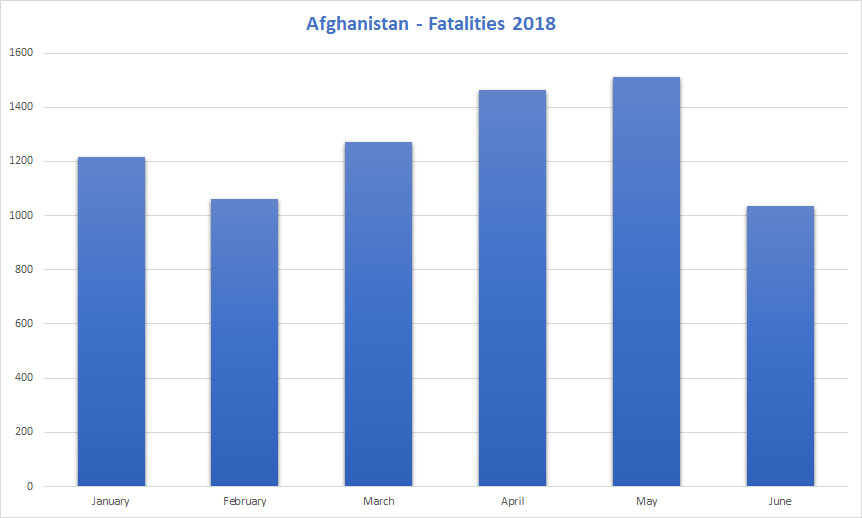