Putin’s Russia: Between Dictatorship and Democracy 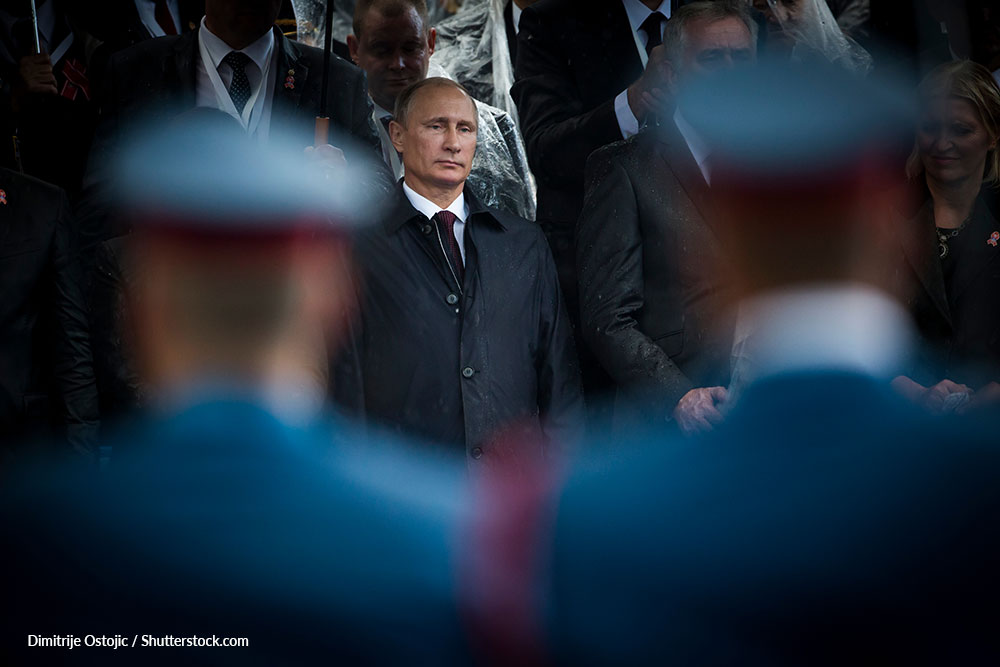 In March Vladimir Putin won Russia’s general election to secure a second consecutive presidential term – his fourth overall. Putin secured around 77 percent of the vote after his main challenger, anti-corruption activist Alexei Navalny, was barred from running due to a conviction for fraud, which he claims was politically motivated. Three years earlier, prominent opposition leader and Putin critic Boris Nemtsov was assassinated near the Kremlin. A former Chechen army officer was later convicted in a trial that Nemtsov’s family denounced as a cover-up. In the lead up to the 2018 vote, Putin refused to take part in any of the televised debates with the remaining candidates. He didn’t need to; his victory was already guaranteed.

Since first taking the office of president in 2000, Putin has transformed Russia and built up absolute control over the country. His approval ratings have been consistently high, helped by the state’s control over virtually all Russian media. In the Reporters Without Borders 2018 World Press Freedom Index, Russia was rated 148 out of 180 countries. “Between draconian laws and website blocking, the pressure on independent media has grown steadily since Vladimir Putin’s return to the Kremlin in 2012. Leading independent news outlets have either been brought under control or throttled out of existence,” said the RSF in its review. Putin’s popularity has also been strengthened by his increasingly assertive foreign policy, most notably the invasion and annexation of Crimea from Ukraine in 2014, an action which fuelled nationalist pride inside Russia. For the population, the president has restored Russia’s Great Power status, which was lost when the Soviet Union collapsed in 1991. Putin was a KGB agent stationed in Dresden in East Germany when the Berlin Wall collapsed; an experience which has undoubtedly shaped his political career and provided him with the motivation to avenge the sense of national defeat and humiliation.

Russian foreign policy, while restoring nationalist pride and cementing Putin’s authority, has not been achieved without costs. Russia’s role in the Ukraine conflict, including the ongoing (unofficial) support for separatists in Donbas, sparked widespread condemnation from the West. The EU has imposed economic and diplomatic restrictions on Russia since 2014, including freezing assets and enforcing travel restrictions on 155 people and 38 entities. The US also introduced multiple sanctions against Russia for the annexation of Crimea and alleged cyber-attacks. The latest measures were introduced earlier this week against five entities and three individuals for their alleged role in cyber-attacks against the US. "The United States is engaged in an ongoing effort to counter malicious actors working at the behest of the Russian Federation and its military and intelligence units to increase Russia's offensive cyber capabilities," Treasury Secretary Steven Mnuchin said in a statement on Monday. Russia has gripped Washington since 2016 after it was alleged that Moscow interfered in the presidential elections in an attempt to get Donald Trump elected. Both Trump and Putin have consistently denied the accusations, but the matter is still under investigation by Special Counsel Robert Mueller. Russia is also suspected of trying to influence the most recent election in France and the Brexit referendum in the UK.

UK-Russia relations were already strained when a former Soviet spy and double agent was poisoned in Salisbury in March. Sergei Skripal and his daughter, Julia, were targeted with a Novichok nerve agent. The UK claims the attack was carried out by Moscow and expelled dozens of Russian diplomats, a move which was followed by 28 UK allies. In the immediate aftermath UK Foreign Secretary, Boris Johnson, said the incident had echoes of the deadly poisoning of Alexander Litvinenko, who was killed in London in 2006. More recently Johnson, using his trademark subtlety, claimed that Putin will try to use the World Cup to boost Russia’s international reputation in the same way that Adolf Hitler did in the Olympic Games in Berlin in 1936. Russia responded by accusing the foreign secretary of “insulting the Russian people,” and claiming his comparison was "unacceptable and totally irresponsible."

Alongside Russia’s use of asymmetrical warfare against the West, Putin has led the country into a protracted military engagement in Syria. Russia’s support for Syrian president Bashar al-Assad has transformed the conflict, allowing pro-government forces to retake most of the regions previously held by rebel and Islamist groups (most recently during the siege of Eastern Ghouta). Russia has achieved its main military objectives in Syria – keeping Assad in power and defeating the Islamic State (IS). Strategically, the campaign has also given Russia a major role in the region at a time when the US is in retreat. No settlement of the Syrian conflict can be achieved without Russia, who are already the brokers between Damascus and the various rebel factions. Understandably, there has also been a backlash against Russia from the international powers who previously dominated the region. The US and EU were determined to force Assad out of Syria for his use of deadly force against the population before Russia became involved. Russian and Syrian jets have carried out thousands of airstrikes across the country, often killing civilians. The alleged use of chemical weapons, including in Eastern Ghouta, has drawn widespread condemnation of both Damascus and Moscow. Russia has consistently defended its ally in the face of all criticism, with Russian Foreign Minister Sergey Lavrov claiming he had “irrefutable data that this was yet another staged event and staging was done … by the special services of one of the countries at the forefront of the anti-Russia campaign."

The events of the last four years, starting with the annexation of Crimea, has left Russia more isolated than it has been since the end of the Cold War. Relations with Europe, with a few minor exceptions, are extremely low, while most Americans outside of the Oval Office are fearful of a resurgent Russia. Similarly, the raft of sanctions, imposed on both sides of the Atlantic, have impacted Russia’s economy.

Yet at the same time, Putin’s grip on power is stronger than ever. The response of the West has fuelled a siege mentality inside Russia and allowed the Kremlin to claim an anti-Russian narrative. The pattern has been consistent, Russian action provokes an international response. Moscow denies all responsibility, accuses the West of anti-Russian propaganda, Putin’s approval rating goes up. Last month Australia and the Netherlands said investigators had evidence that Malaysian Airlines Flight 17 was shot down by Russia’s 53rd Anti-Aircraft Brigade inside Ukraine in 2014. Once again, Moscow claimed plausible deniability, stating that it had never deployed anti-aircraft units to eastern Ukraine, despite evidence to the contrary. The UK, US, NATO, and EU all offered support to Australia and the Netherlands, but the likelihood of Russia ever accepting responsibility is extremely remote. Many of Russia’s most vocal critics could have boycotted the World Cup and stopped their national teams from competing. Instead, the tournament will go ahead as planned, and while the host nation has a slim chance of winning the tournament on the pitch, they will secure a much more significant victory off it.